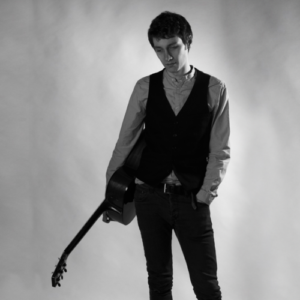 Tom Hyatt – Out Of Time (Self released)

Another young man with a guitar, Tom Hyatt is evidential proof of the enduring appeal to both musician and listener. In 2011, Hyatt was a prize winner in the Rhythm of London Busking Underground contest. Following this he was headhunted for Britain’s Got Talent, but wisely (in my opinion) declined what he describes as ”A shortcut to fame’ quoting the Irish physicist J. S. Bell: “The longer road sometimes gives more familiarity with the country.”

What road do you take if you’re the son of a Punk, raised in an era of pop, replete with digital plastering over the rough-edged crevices of excitement to achieve shiny veneered production? Go the acoustic route? When I ask Tom about this, he says ”Folk is the new Punk’ – with maybe a slightly hopeful look in his eye – but he has a point doesn’t’ he? On just acoustic guitar and vocals, you stand or fall on your ability to entertain. Tom adheres to the power of the timeless, well-written song combining this writing style with punk principles . Embedded with a strong DIY ethic: he has independently written, performed, recorded and produced his own output to date; having set out with the firm intention of producing an’ awesome physical object’ in vinyl format.

The result of his labours is a well-crafted accomplished debut release: ‘Out of Time’. Reflective of personal relationships and living for the moment he’s lyrical, rhythmic, and, at times reminiscent of Aztec Camera’s Roddy Frame. Title Track ‘Out of Time’, twisting the negative connotations suggested is more an expression of living, loving, being open to experience. His playful poetic riffery continues with the lofty and whimsical ‘Queen of Edmonton Green’; a play on North London locations and their ambience and the transient flashes of city life. The reflective ‘Take A Chance’ and ‘Now flightless Wings’ establish his power to hold a ballad, as effectively as he can deliver his sharp lyrical witticisms with an up beat tempo. A burgeoning talent and hot off the stage from an appearance with a brace of punk legends: ‘The Three Johns’, and ‘the Membranes’.

Tom Hyatt’s four track EP ”œOut Of Time’ releases 20 May 2012 and is available in two formats from Bandcamp:

Limited edition signed 7” vinyl, plus a digital download of the EP – includes Open Up My Eyes ”a bonus track exclusive to vinyl owners (and also included in vinyl digital downloads only).
Digital download available online and also through printed download cards at shows.