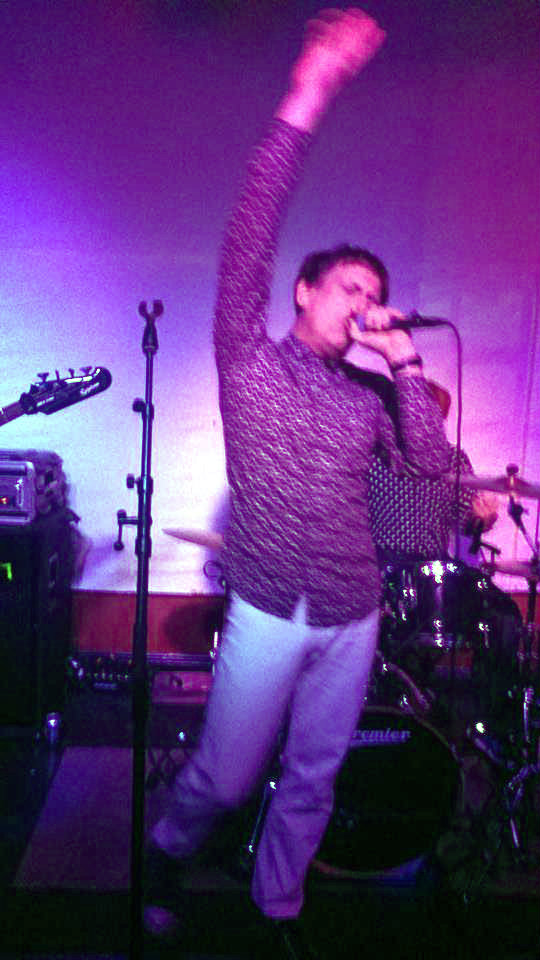 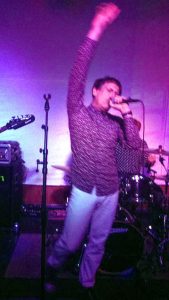 I like to be in the company of legends. And here is a quick list of legends of the older generation I can easily reel off: John Cooper Clarke, Atillah The Stockbroker and Tom Hingley.

Coming two days after the release of the new Roses track, this was a great gig for fans of the scene. After I saw the tail end of local support band, Dellavega, who I could succinctly describe as very sharp, Tom Hingley’s new backing band, The Kar-Pets took to the stage, performing the intro to “Commercial Rain”, before the entrance stage right of a slimmed-down since I’d last seen him, Tom.

Now either he’d grown his hair and was using Just For Men, or the man was wearing a wig. Later he was to reveal it was indeed the latter. I’d had my hair styled especially for this gig that I’d looked forward to for weeks after a tip off from Reevesy, owner of Cardiff clothing shop, Mojo King. I undoffed my Cleveland Browns hat, and showed off my Mod-ish type of haircut, with a bit of grey because I couldn’t afford the highlights I was thinking of getting, and besides: look at the Roses, they don’t mind showing the grey.

The reason I wanted to go for the Mod look was to try to fit in to the style of the venue. The Lanes is one of my favourite venues. I saw The Moons here a couple of years back – a full on Mod band – and at that gig, it was all Fred Perry t-shirts, and more sharply stylishly attire than I think I’d ever seen packed into one small venue. The turnout for this one for this gig was on the lowish side (surely The Eurovision Song Contest as an alternative was not a reason for stay-aways?!). No doubt it would be bigger if the bill was for The Inspiral Carpets, but for me, that band is lacking an essential ingredient.

I haven’t read Hingley’s book, “Carpet Burns” and to be honest, I don’t really want to. If it’s all about a nasty tiff with the band, I’m not sure I need to hear it. Tom is a bit of a hero of mine, especially after something like an hour long chat with the great man before one of his solo gigs in Cardiff. He’s a loonie, but an incredible, lovable loonie who doubles as a fantastic singer once onstage.

The set is comprised entirely of Inspiral Carpets hits, ie. none of Tom’s own solo work, and I guess the reasoning is he is fully within his rights to do this. My favourites, perhaps: “Joe”, “She Comes In the Fall”, “Saturn 5”, and of course closer, the sublime “This Is How It Feels”. Not too many duff tracks in the roster. Mr Hingley has put out a multitude of solo records, and he was great as a solo artist, as well as with his band The Lovers, but this new career move works equally well. His new keyboard player is just ace, and all the band look completely the part, with moppy hair (not sure if wigs) and general grooviness.

Hingley monkeyed around, going into the crowd a bit, not minding people getting on the stage, adorning my hat himself at one point. The guy is indeed a card. After Mr I Brown wore my Cardiff City shirt, despite far fewer witnesses, could Mr T Hingley briefly sporting my Browns cap be a seminal moment once again? Not so much of a headline grabber, but the vibe from the crowd was enough for one gentleman I spoke to utter those words, “One of my favourite ever gigs.”

Top guy, top crowd, top venue. I’d had a couple too many shandies, but who was I to disagree with the man? And the T-shirt prices were kept at a fiver.

Find out more about Tom Hingley here  and gigs at The Lanes here.

All words by Nick Fisk. You can find more of Nick’s writing on Louder Than War at his author’s archive.