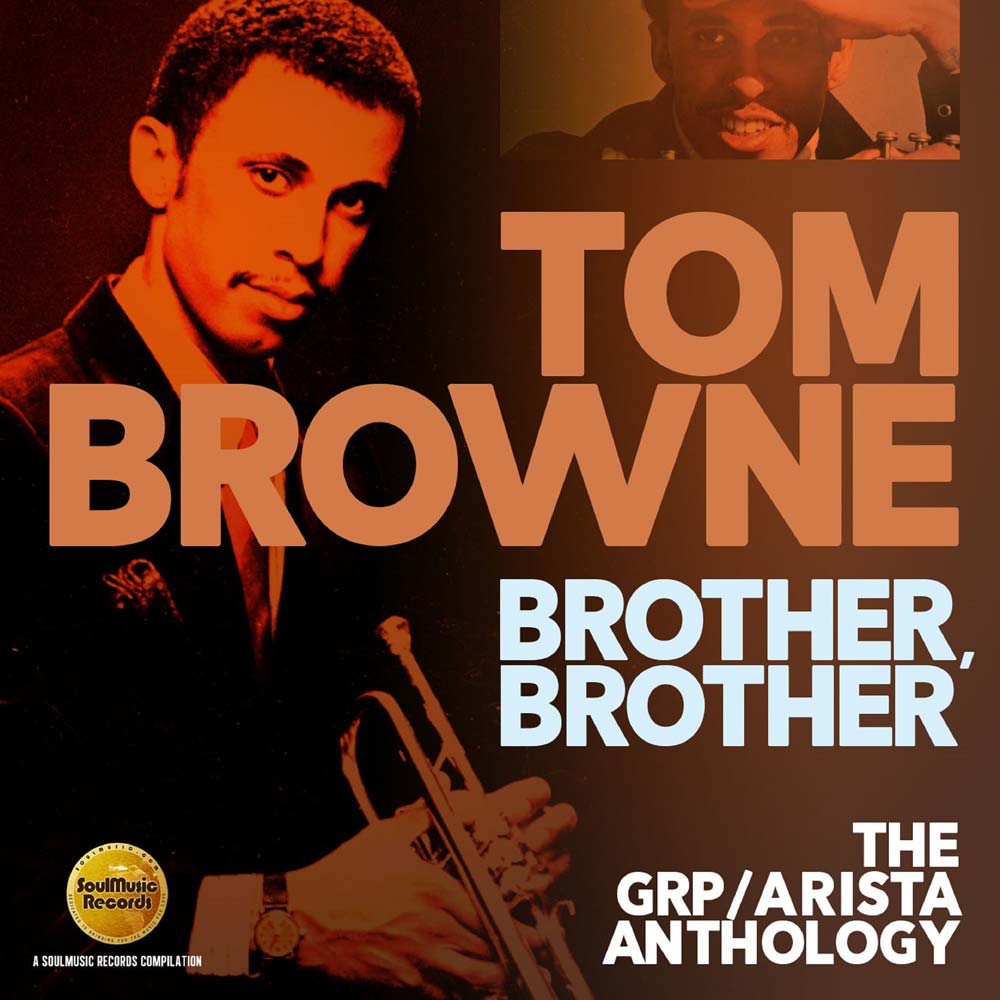 Compilation of the six albums made between 1979 to 1984 by trumpeter/bandleader Browne, most famous for his 1980 UK Top Ten hit Funkin’ For Jamaica….Ian Canty hears old style Jazz Funk mutate with the advent of Hip Hop……..

Tom Browne, a New Yorker from the Jamaica section of Queens (clearing up a possible misconception in one stride), first got his start as a sidesman for such Jazz/R’n’ B legends as Dr Lonnie Smith and Sonny Fortune. After a recommendation by guitarist Earl Klugh he was signed to Arista Records, ostensibly in a quota-filling move because the label were lacking a Jazz trumpeter. In 1979 he made his bow with the album Browne Sugar, selections from which make up the first five recordings on Brother Brother.

From these early offerings we can glean that Browne specialised at the time in dreamy, creamy, ultra-smooth Jazz Funk. All quite nice to listen to on a summer’s afternoon but nothing really that grabbed the ear. It would be because one track, recorded as an afterthought to beef up his second LP Love Approach to the forty minute mark, that would change everything. Funkin’ For Jamaica would send Browne from the Jazz backwaters straight into the public eye on both sides of the Atlantic, scoring a number one on the R & B charts in the US and a Top 10 hit in the UK as well.

Utilising “street conversation”, an excellent lissom tune, great vocals by lyricist Toni Smith and that irresistible order that one “better get in the groove”, Funkin’ moved Browne right up to the forefront of Dance culture in a way no-one could have predicted a year previous. To his credit, took the ball and ran with it, with only a few glances back to his Jazz roots.

The infectious party Funk of Magic, from his third album of the same name, also made a splash in the charts. It was a stylish and danceable piece of work and was followed by the suggestive Thighs High (Grip You Hips And Move) in a similar configuration. Midnight Interlude though showed there was more than one string to his bow, being far more subtle and Soul orientated. On the selections from each of the albums here there is plenty of raw material for people looking for breakbeats. Talking of which, as the decade wore on Browne began to utilise the Hip Hop and Electro rhythms that were gradually finding their way from the streets and block parties into the mainstream of Dance Music. Whilst incorporating these new moves, all the while he still managed to sneak his elegant, floating trumpet sound in there somewhere too!

By the time we reach 1983 and Rockin’ Radio we’re firmly in this new territory, for the tracks featured from this time are awash with cutting edge (at the time) technology thanks to producers Michael Jonzun and Maurice Starr (who was riding high with his “Jackson 5 for the 80s that nobody wanted” New Edition). Rockin’ Radio itself bears some comparison with fellow Jazzer Herbie Hancock’s hit single Rockit, which charted in the same year. Despite the similarities, Rockin’ Radio’s vocoder voices, the “throw in the kitchen sink” style gimmick-packed electronics and Funky groove means it still cuts the mustard. Even though the material at this point has a decided “up to date” air there was still room for occasional throwback to the halcyon days of Jazz Funk like Angeline, but even that boasts some prominent synth drums. Times had changed indeed.

I’m not sure who got to Electro first, Hancock or Browne, but what is certain is that Rockit would influence Tom’s next LP Tommy Gun (the sleeve notes confirm this). On this platter we find the thunderous electro-dance of Hit Man, full of pneumatic percussion and Hip Hop beats and blow me if the old devil doesn’t sneak his trumpet in through the side door! Browne really wanted to modernise that hard Electro-Funk sound even more and although his work didn’t feature rapping as such he still managed to evoke some of the atmosphere of the streets. The sassy vocal on Mr Business and crunching beats on Hit Man were proof of that. Siedah Garrett (who would later go onto score a number one hit with I Can’t Stop Loving You with Michael Jackson) provided the vocals on the album’s big single Secret Fantasy, which was more of a high quality modern Soul ballad than anything else.

After these years, with the tide of Rap duos taking up residency on the dance floor and his contract with Arista done, Browne returned to the fringes. He still recorded throughout the 90s but in a much more low-key way and back to the Jazz sound he made his name with. Though his years as a hit-maker were a fair way off by now, people would reuse and remould his music over this period, most notably Driza Bone who remixed Funkin’ For Jamaica for the Acid House crowd. It’s featured here and goes to prove you can’t keep a good tune down!

During the years between 1979 and 1984 Tom Browne constantly updated his approach, gamely and enthusiastically adapting new elements that emerged, which resulted in commercial success and some damn fine waxings. He kept an open mind for new sounds which greatly benefited his work. On Brother Brother, some of the early tracks might be a little on the Jazz Funk musical wallpaper side, but things soon change. As he brought his sound up to date he really hit his stride and in doing so created some memorable moments in the development of Dance Music.