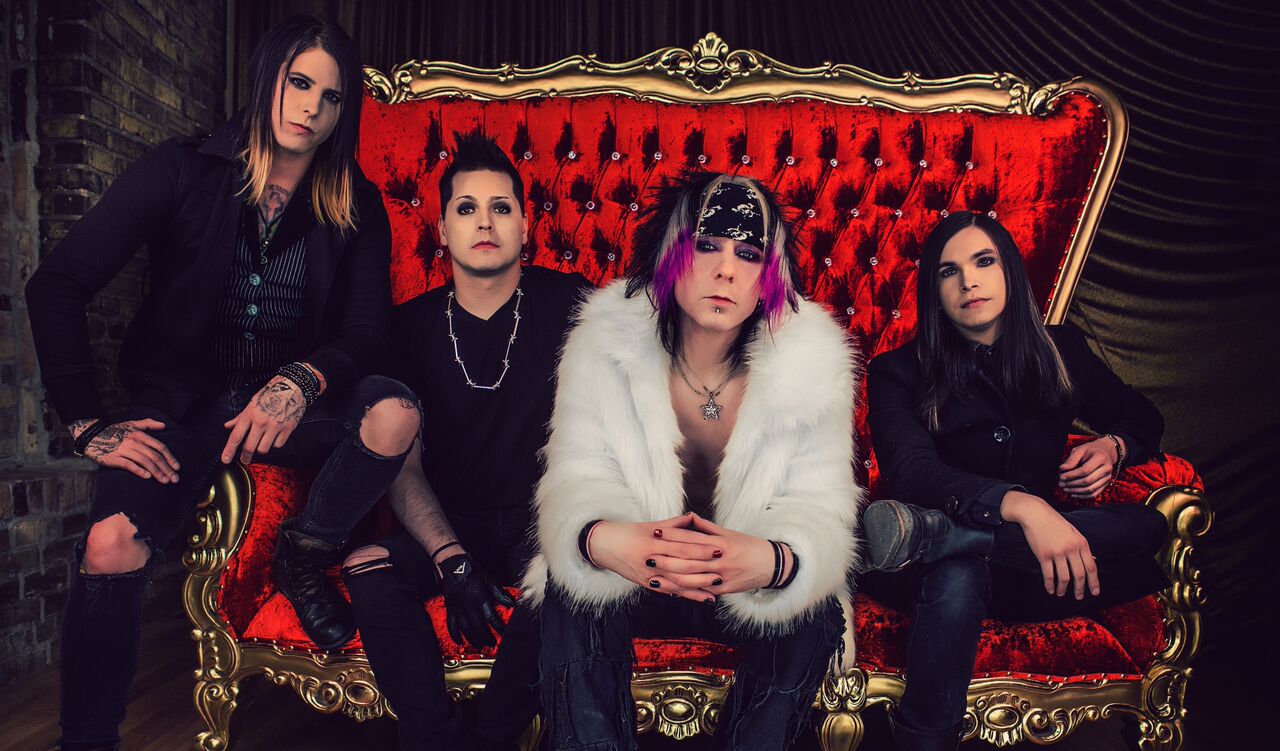 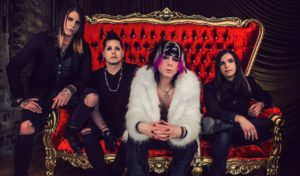 Toggo comes with an air of mystery. Once in a band called Scared of Girls, located in Hollywood, he was about to go national when he literally disappeared. Eight months later he re-emerged, having lost everything due to a strange experience…his house, his car, his money, and his chance at fame.  Now he’s back with his soon to be released EP titled “Ultrarock”, accompanying his new single and video for Cannonball.

I’m still not quite sure what universe Toggo has originated from, but wherever it is, I need to be there. I visited his Twilight Zone of creativity, and had a conversation with the EDM glam rocker, who replied to my inquisition in the most creative fashion….

Louder Than War: Why are you not a household word?

Well, that’s what we’re pushing for now because we are just releasing this, making a huge push to do what we can and make it blow up.

I have a feeling that your live performances are something really special. If you could have your ultimate stage fantasy, what would you want to happen?

(Laughs) If the sky is the limit? It would have to be at some monster arena that holds like 100,000 people. It would probably involve everything that you’ve ever seen, from flying over the audience, to using pyrotechnics, giant screens, holograms, a little Alice Cooper, I would just go all the way out. I love anything that’s larger than life.

Even when we do smaller concerts, I treat every show like it’s an arena show. For that hour, I want people to just be transported to another place. For me it’s not even about the show itself though, because I’ve seen many shows with amazing pyrotechnics and all that stuff, but the singer just doesn’t have “it”. I’d much rather see a show that’s totally stripped down, where the singer has that special something that just makes you glued to him. That’s what matters.

In a world where he’d still be alive, it would have to be Michael Jackson. He’s never been my hero, but he was so just incredibly talented in every aspect of the word, that I would be just blown away if I met him. Other than that I have people that I have mad respect for, and would love to meet, like Steven Tyler.

What influences your music, and what planet are you from?

I can be influenced by just about anything. But my roots come from the 1940’s, like Billy Holiday, Ella Fitzgerald, Nat King Cole, all those guys. That’s where I get my melodies from. Then there’s bands from the 70s like Queen, that I love, but I also love punk. I love the Sex Pistols, but at the same time I think an artist like Sia is amazing. So my influences can be anything from a current song that I hear on the radio, to whatever inspiration hits my brain.

You’re a new edition to a crayon box, what color are you?

It would glow in the dark, it would be 3D, and it would draw holograms.

That song is actually a true story. It was 2013, and there was this girl that I’d been obsessing over, couldn’t get her out of my head. I’d seen her on Facebook and for two years I was sort of creeping her (laughs). The second I found out that she’d become single, I asked her out, she said yes, and Cannonball describes play-by-play what happened between us that night. It was wonderful. Every part of that song is literal.

In the end I ended up fucking it up with her because of my own relationship anxiety. But then 2 years later, this past December, we met again, totally randomly in a bar, and the magic between us was still there.

So are you still with her?

Right now we’re just taking it slow because I broke her heart so badly last time. But it’s one of those things where you meet your soulmate and you both know that you’re not going to give up on this.

I love that story.

Yeah happy endings are good (laughs). Ironically the script for Cannonball was written before the actual song was written. I originally wrote it for another song called Head Over Heels, but it was never used. Years later, when we were looking for a video idea for Cannonball I thought “OMG, this one is perfect”. Basically because the script was about two people obsessed with each other, and in real life we were away from each other for 2 years, both secretly obsessing about each other the whole time (laughs).

If you were a Superhero what powers would you have?

That one is pretty easy. I’m a single dad. After becoming a parent, I realized why the world is as fucked up as it is. I would notice parents everywhere acting like bullies to their kids, without even knowing that they were. Not their fault, it’s just a generational vicious cycle of passing on our issues to our kids. My superpower would make people see their kids as equals; treating them with the same respect they treat adults with.

Myself I never wanted kids, so my kid was an accident. But once I got him I decided I was going to raise him with absolute respect, grace and love.

One time my kid asked me if I wanted kids before I had him. I said “No, you were an accident” (laughs). He goes “You didn’t want me?”

I’m always honest with him so I said ”Well no, you were a total accident”. I get all choked up when I talk about this. He looks at me, and gets all teary-eyed, then runs up and puts his arms around me and goes “OMG pappa, you never wanted me and you’ve still given me this amazing childhood”. Totally blew me away.

I chalk all that up to me completely respecting him. Don’t get me wrong, he gets disciplined but in a way where I don’t look down on him; he still feels heard and respected.

So that would be my superpower, for parents to fully respect and honor their kids. There would be world peace if everyone did that.

How old is he?

When you were growing up, who did you listen to on the radio?

It was a combination of stuff from the 1940’s; music that my grandparents’ generation would listen to, and pop/rock.

You know it’s funny, I’ve never been influenced by David Bowie. I’m hugely influenced by Queen though. I love Freddie Mercury, which you can probably tell when listening to some of my harmonies.

It instantly transforms me into this dimension that doesn’t exist in any other time or space. No matter how nervous I am before I go on stage, the second the lights come on and the music starts, I lose all fear. I connect with my audience and it just takes me to this place that’s just better than anything else on the whole planet. Everything about it is just magic to me.

We are working on making a Scandinavian tour happen this fall, with US dates to follow.

What is your favorite question that anyone has ever asked you?

You have better questions than anyone I’ve ever been interviewed by (laughs). I’ll tell you the favorite thing that someone has said to me. One of my biggest fans, who’s been with me through thick and thin, said to me. “Toggo, you’re shiny!”. I love that,

It fit so well, because I like being larger than life, I love having an androgynous, colorful image, big stage productions, all that stuff. It’s one of the coolest thing anyone’s ever said to me.

Yes, you do dazzle. Is there any one song that never fails to evoke emotion in you?

Hotel California, by the Eagles. It does something to me every time. I don’t know why, it just does.

What’s something that you would like to say to your fans and followers?

Look out, here I come!

You live in Minnesota, what the hell are you doing there?

Well, I was living it up in LA, having a pretty awesome life. Then one day I met this girl, and she pulled me into a scam of astronomical proportions. It involved me, my best friend, my family, and her family; we all got scammed. I was literally brainwashed, and I disappeared under mysterious circumstances for eight months. I feel weird every time I talk about it because it makes me sound gullible. My friends put up wanted posters, they thought I was abducted.

What actually happened in those 8 months is beyond surreal and I intend on turning it into a movie one day. The whole thing was just a bizarre, life-altering experience.

So yeah, I ended up in Minnesota, raising a kid by myself because the mom, who pulled the scam, is also drug addict. I could have moved back to LA but Minnesota was a really good place to raise a kid.

Back when this all happened to me I lost everything – my house, car, credit, you name it, I even lost a lot of friends. I was sitting there completely shattered, emotionally destroyed.

But once I picked myself back up again, it made me super pissed and determined like never before. I decided that because of this, I was going to make all my dreams come true. So I spent years building an online company up from the ground, and made it extremely successful.

Once I’d made that happen, I got back into my music. From there, things have happened pretty rapidly. I got a production deal with one of these big production houses in Norway. We recorded an EP together, then I shot the video for Cannonball in Hollywood, and here we are.

What happened to me was brutal, and the past 10 years have not been easy, but I came out of it a much stronger person. Now the only thing left is for me to conquer the music world, and I’m not resting until that happens.