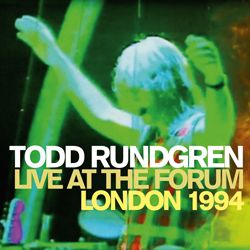 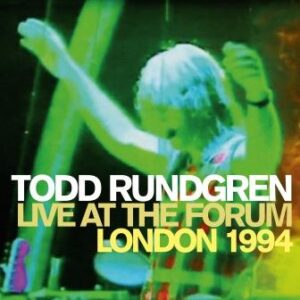 American music fans have always seen Todd Rundgren as a visionary and on this album he raps as well inviting his fans up to do a turn. Paul Clarke enjoys an odd – but fun -record of a surreal night out for his UK fans.

Most music fans will know Todd Rundgren as the man who produced the multi-squillion selling ‘Bat Out Of Hell’ but in the States he is regarded as a genuine musical pioneer.

This odd – but strangely entertaining – live album is from the tour promoting his No World Order, album containing 1000 predetermined sequences which effectively meant you could make your own album. Quite why you’d want to do that is less clear, but Rundgren says it would take years to explore all the permutations even if you were doing it all day, every day.

If that wasn’t clever/pointless enough this live set featured a metal stage plonked in the centre of the venue housing a bizarre traffic light system encouraging audience interaction. So a red light meant the stage was exclusively for Todd, amber meant his three dancers would come to the stage and a green meant the audience could get onstage to join in.

As you might image the result is pretty chaotic as Rundgren tries to explain the concept to a bemused audience as other fans queue up to join in. This might be the only live album where amateur musicians get the chance to solo – with mixed results – alongside one of the world’s best guitarists. No-one can accuse a middle aged Rundgren of resting on his soft rock laurels as he tries a bit of rapping on an epic ‘Feel Too Good’, which isn’t as bad as it sounds, as some of the amateur axemen bash away in the background. He gets really wound up on ‘Fascist Christ’ slagging off religion as his fans crowd onto the stage waiting to join in. Rundgren also embraced electronica on this album which brings new life to his big hit ‘Bang The Drum All Day’ which for some reason was a massive hit in sports arenas across America.

All in all a bit of curate’s egg, and one for the diehards, but it would be churlish to diss a well-established artist having a go at doing something new, and in the process giving some of his fans as a night they will never forget.

He is also on Facebook and tweets as @toddrundgren