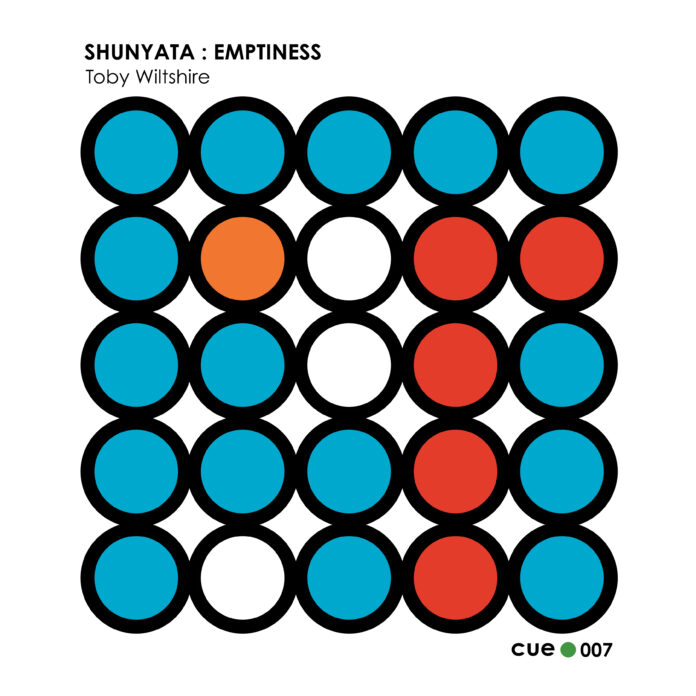 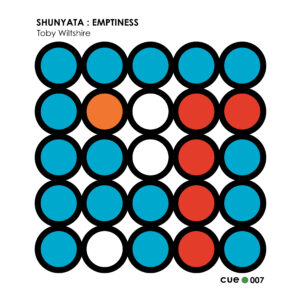 Cue Dot Records is a fascinating project. The label takes its name from the world of cinema, with cue dots being the marks placed on certain frames towards the end of a reel to guide the projectionist to switch from one projector to another, thereby creating a seamless viewing experience for the audience. The golden age of cinema is clearly an inspiration (it’s even evident in the consistent artwork) and, just like the great directors, their oeuvre is ever-changing. Consider the work of Fellini, for example. Sometimes madcap and eccentric, sometimes a little surreal, sometimes dark and mysterious, sometimes just plain brilliant storytelling. That’s precisely what the Cue Dot series is becoming.

Now we have another variant to the catalogue in the form of Cue Dot’s seventh release, Toby Wiltshire’s Shunyata : Emptiness. Compared to the label’s most recent releases, this is an album that undoubtedly changes pace. We are in ambient-plus territory here. As evidenced on his previous albums, 2017’s Selected Works and 2019’s Surfacing, Wiltshire (a Leeds-based composer, sound artist, saxophonist and meditator) is a specialist in creating ‘beatless’ electronic music and, sonically speaking, Shunyata : Emptiness fluently follows what has come before. Just like his previous albums, he has once again created this perfect blanket of sound that wraps around you completely.

Shunyata : Emptiness is an album that leans upon imagery and concepts from the Buddhist world and, like Forest Robots’ fine release from earlier this year, Amongst A Landscape Of Spiritual Reckoning, it has a very eastern, mythical feel. From the opening track, Mist Clearing On The Mountain, you are transported to a place of greater serenity. Images of temples, barely visible across lush valleys, are evoked. It’s a meditative and contemplative vibe and that seam runs throughout this fine album.

Nothing is superfluous, every note is here for a reason. Everything is carefully considered, right down to the field recording on Sakura which sounds like a rusty swing in a playground swaying back and forth. The absence of children’s laughter brings a slightly uneasy feel, but that sensation is rare on this collection. For the most part, these are compositions that are manufactured from placid, sustained tones that educe stillness, peace and harmony. Unlike much electronic/ambient music produced today, this is not a cold, aloof body of work. Instead, Toby Wiltshire has created something warm and welcoming, attractive rather than seeking to repel, with the perfect example being the wonderful Orange Light.

The foundation is structured syntheses of software, field recordings, Minilogue XD keyboard and a plethora of Eurorack modules, all of which are exquisitely fused to create rich blankets of sound that cloak themselves comfortingly around you. As highlighted previously, there is an economy of beats on Shunyata : Emptiness. But that’s okay, because it’s almost as though the absence of rhythm allows these soundscapes to flow freely and paint vivid pictures in the mind of the listener. A great example is the most intricate filigree of Karuna. Another is the album’s apogee, the magnificent Glimpse. Imagine walking at dawn on the summer solstice. You see a spider’s web, shimmering impossibly in the pale light. Its gossamer-thin strands are implausibly fragile and you wonder how the dew drops that cling to it don’t pull it apart. It’s a track that appears to be crafted from the same materials. Delicate, precarious, fascinating.

The elephant in the room, of course, is the perception of this genre. I realise that all the chatter about eastern mysticism and warm cocoons can conjure up precisely the wrong images. There’s no escaping the fact that ambient music, arguably more than any other genre, has a tough time of it. This topic was discussed on these pages by the brilliant Simon Tucker a couple of years ago when reviewing Brian Eno’s four ambient monoliths of the mid-seventies/early-eighties. Simon articulates this much more eloquently than I could hope to, but the gist of his narrative was that there is a fine line between Spotify’s algorithm-driven, ‘new age’ definition of ambient and the inspired brilliance of the likes of Eno’s work. The existence of this ‘chill-out muzak’ often gives the genre something of a bad rap and that’s tragic. There’s an undoubted irony that Eno conceived Music For Airports precisely as a response to ‘muzak’. Rest assured, Shunyata : Emptiness is a collection that sits firmly in the ‘good ambient’ camp. It most certainly isn’t music to stick on whilst doing the dishes. It requires, and deserves, an investment.

Toby Wiltshire has released an album of seven expertly composed, performed and produced tracks that do so much more than the background music of your typical Spotify playlist. There is an intelligence and level of originality in this collection that has to be admired, one that creates an utterly enveloping and thought-provoking listening experience. It’s like stepping into a cocoon and isolating yourself from the craziness of the world we live in today. We could all benefit from that – even if it is only for the thirty-five minutes of Shunyata : Emptiness.

Shunyata: Emptiness is available (digital or CD) on Bandcamp.

Toby Wiltshire can be found here.  He is also on Twitter.