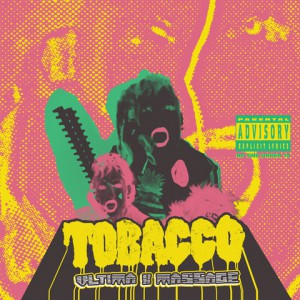 “This might be my most purposely difficult album yet, but I promise if you let it in, it can fuck you up” claims Pennsylvanian beat-monger Tobacco. But after one listen to Ultima II Massage I was, metaphorically, a spent force, ready to reach for my cigarettes and my wallet, pay my $200 and emerge panting from the massage parlours that populate the record’s sleeze-soaked narrative. After several listens however, I found myself drawn in to its spasmodic whimsy and ultimately upifting nature.

It’s easy to question how a record such as Ultima II Massage can even have a narrative, Tobacco’s occasional vocal barely discernible amidst the fractured electro and ruptured bass of the record’s 17 tracks, but it’s there, if not explicitly. Indeed lyrically, there’s barely any narrative to speak of; obscenity is rife and there’s as much talk of ejaculation as there is of ice pops. It’s this dichotomy of innocence and sleaze that make Tobacco who he is, and never has it been more evident than here. This isn’t a bad thing though, and it’s a motif that carries on in to the music too.

The opener Streaker, for instance, is a scuzzy combination of digital and analogue, a warped synth juxtaposed against live drums, providing both the weight and the sleaze on which Ultima II Massage is built. Tracks such as Self Tanner or Beast Sting lift the record from its psychedelic depths at all the right moments; a breath of intoxicating air between mouthfuls of stagnant swamp water.

It’s this balance that allows …Massage to “breathe”, something brought about by Tobacco’s insistence on “breaking it in all the right places”. Paradoxically it’s the fractured nature of the record coupled with its reliance on opposites that make it feel as cohesive and natural as it does, despite how unnatural the recording process was – those moments deemed “just right” picked apart until barely recognisable, then morphed into something uglier.

Interestingly enough, on certain aspects of the album, Tobacco has obviously succumbed to his pop urges. Tracks like Lipstick Destroyer or Blow Your Heart come off like Daft Punk in the throes of a k-hole, unable to stand, zoning in and out of consciousness. This is no bad thing, however, and the technicolour injection into otherwise stale, mainstream electro is a welcome inclusion.

I had no idea what to expect going in to this review, and I had more than my fair share of reservations. As it happens it’s been one of the most enjoyable albums I’ve had to listen to all year and one that’s definitely opened a door for future electro that I might have otherwise overlooked in favour of something much more guitar-y.