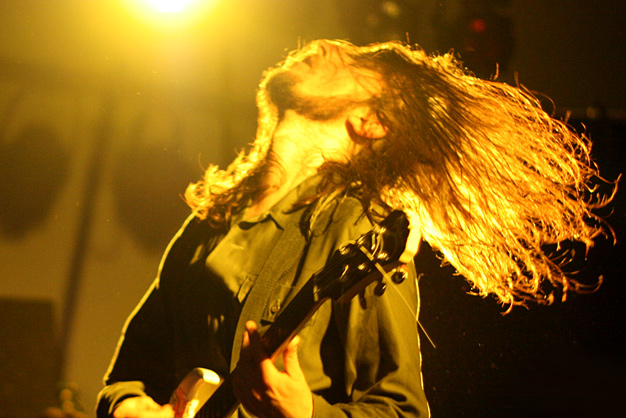 I arrive mid set and am instantly pummeled by an amazing wall of sound. I’ve been aware of To The Bones for three years, I once saw them at a new bands slot at the In The City music convention, they were wild and chaotic then in all the best possible ways, since then they have toured hard and had all the new band radio and press stuff and have arrived at that precipice that bands always get to when they are not a new band any more. Some give up and some…

Some just get even more intense and powerful, something has snapped in the Bolton band’s psyche and they have stepped up many levels. This is a brilliant pulverizing racket but with really good tunes, the only gig I can reference here is the time I saw Nirvana on the pre Bleach tour in America when they were a four piece, playing to 20 people in Maxwells in Hoboken. This has that same sense of raw power, that same sense of urgency and the same sort of great tunes.

To The Bones are really that good.

The question is can they transcend their surroundings, trapped on the wrong side of the Atlantic where there is little or no infrastructure for British rock bands and a media heavily pitted against any band who dares to get noisy on a guitar, and yet conversely existing in a city with a massive rock scene – a scene that can easily sell out arenas for rock bands with no press and radio.

It’s frustrating for me to watch bands like To The Bones and Obsessive Compulsive work hard on the live circuit and getting to the top of their game and not get their media dues. We have enough alternative radio stations out there, surely this sort of music demands more than a cursory, occaisonal play? There is support, just not enough, bands like this should be mainstream…

Meanwhile the band have turned their frustrations inwards into their music and the power and incendiary rush is something to behold. The gig is hypnotizing with its feral power, the band are super tight, the songs are anthemic and have the emtional rush that would connect to the endless parade of teenagers in their Kurt as Jesus T shirts.

To The Bones are one of the best sounding live bands out there. If you ever understood the aliveness of noise played by the right hands then check them out. now.