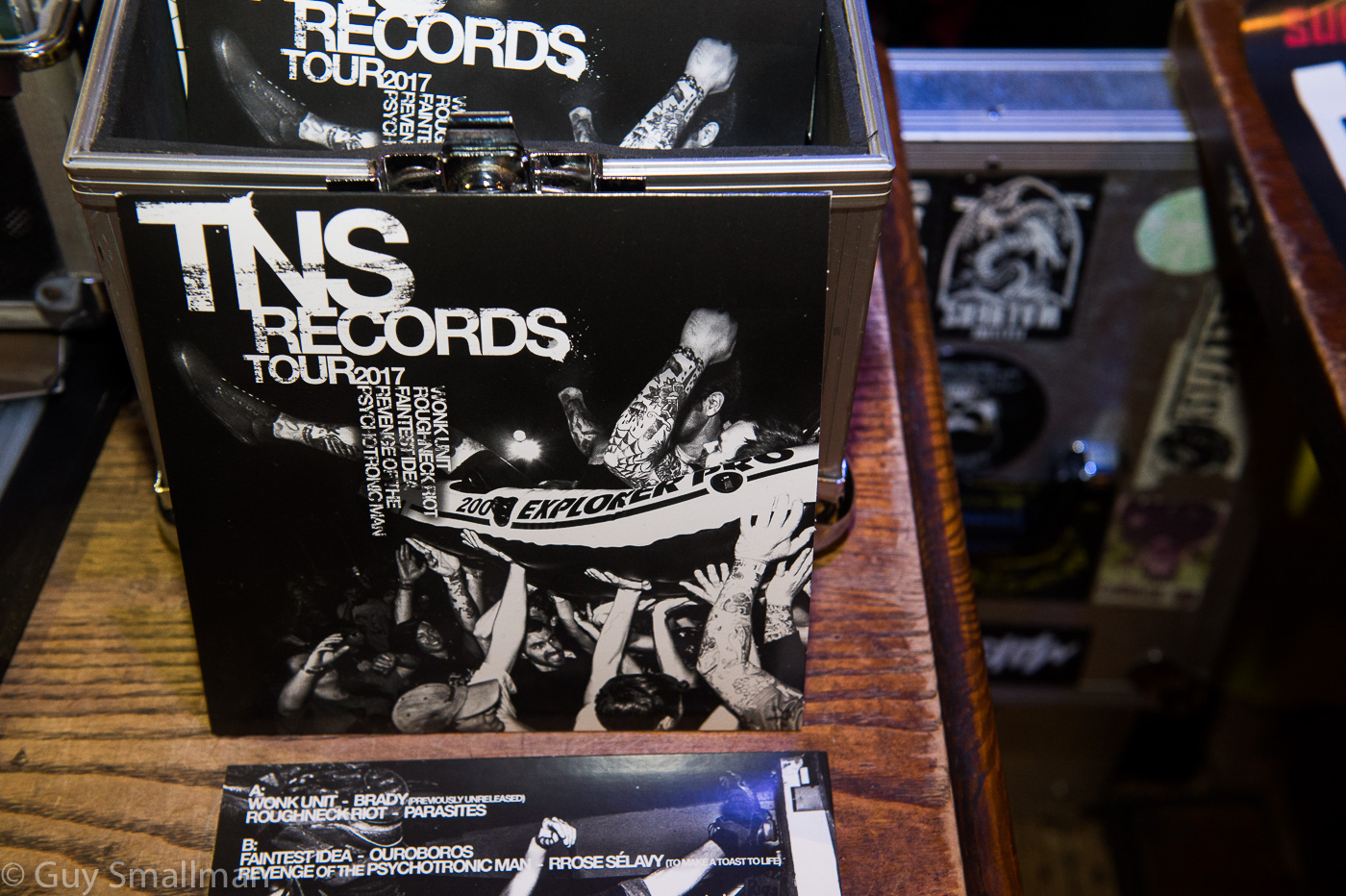 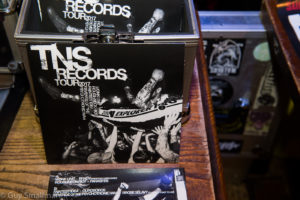 Manchester based TNS Records have managed to perfectly encapsulate the diversity and importance of the underground D.I.Y. punk movement with their latest tour which pitched up in London on Saturday.

Four of their finest bands playing forty minutes each. In an order that will change each night. This is three-chord democracy in its purest form and a perfect introduction for newcomers to the scene.

Opening tonight’s show, folk-punk northerners ROUGHNECK RIOT are visibly chuffed to be playing to a nearly full house. It seems that most of the 300+ advance ticket sales are here already and it is only quarter past six. They will be headlining tomorrow in Warrington on their home turf. But you could be forgiven for thinking that they were from round here. 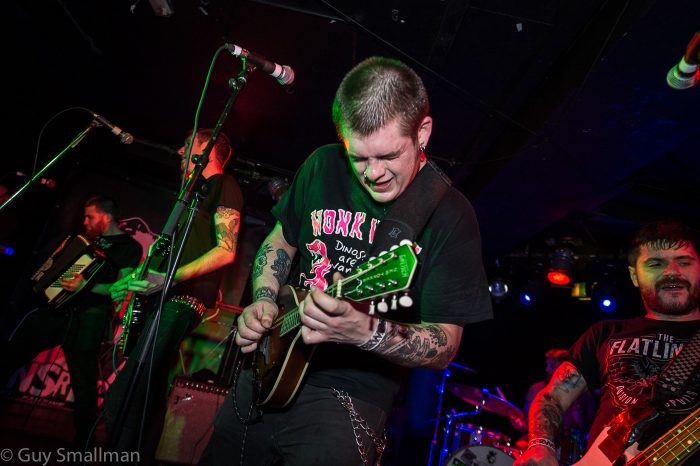 Tearing through thirteen tracks from their three albums the dance floor is bouncing and the band are looking decidedly mashed up by the end. They play with a fierce energy that smashes the political message of their songs into the ears and faces of the assembled (and now heaving) throng. The combination of Caitlan’s banjo combined with Matty & Sam’s Mandolin & accordion churn out some stomping harmonies that The Pogues would have been proud of. Fucking great start to the night!

Next up FAINTEST IDEA take to the stage. Well some of them…

Their hyperactive brass section (who have to be some of the greatest exhibitionists in the history of trombones) commence the set with a stroll through the crowd for ‘Back to the Asylum’ a marching chorus which warms everyone up for the swinging ska tune that is ‘Circling the drain’. A great song and also opening track of their latest release ‘Increasing The Minimum Rage’ which is the kind of album that readers of the Daily Mail are justifiably terrified of.

I suspect that ‘Cocktails’ is more about molotovs than mojitos containing the glorious line: “Just like the flame destroys the match that creates it, you know we won’t stop kicking till we break it”. Another highlight is their cover of ‘Corporation’ by the sadly missed barn dwelling punks I.C.H. They close with the beautifully skankin ‘Bull in a China shop’ and there is now sweat dripping off the ceiling with two more bands still to play.

REVENGE OF THE PSYCHOTRONIC MAN are the fastest and shoutiest act on the bill and they genuinely play at a million miles an hour. Their twenty-one-song set (yes, you read that right) is a proper assault on the senses and they barely pause for breath. With gentle melodies like ‘Nimby prick’ and ‘Donkey Yeast Infection’ it is unlikely that they’ll invited onto the talk show circuit any time soon. Which is kind of a shame as they could fit a least six of their tracks into the standard four minutes of TV airtime given to musicians. 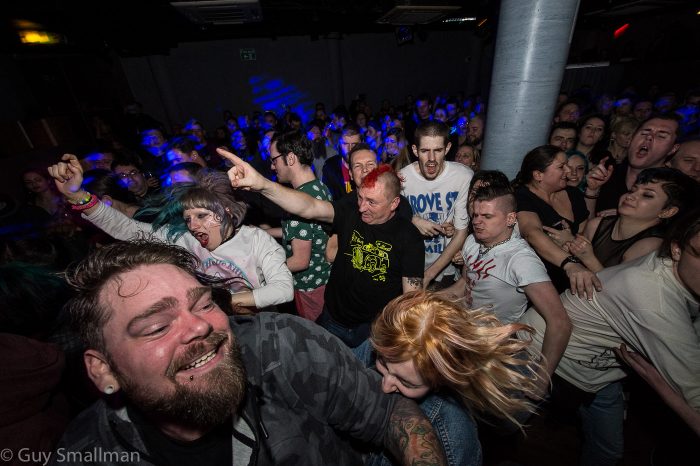 Most of the set is taken from their new album ‘Colossal Velocity’ and the pit is responding favorably with that ritual which involves morphing into a human pyramid-whirlpool thing. The bouncers are not amused by the blatant defiance of the venue’s no crowd-surfing policy but don’t intervene. It is exhausting to watch let alone get tangled up in.

When it comes to retaining guitarists, tonight’s headliners WONK UNIT are slightly less lucky than Spinal Tap were with their drummers. But any nerves about how they’ll cope tonight are quickly expelled by their regular trumpet player/keyboardist Ed. He has taken over axe duty at two weeks notice and is already playing front man Alex’s songs like a veteran.

They kick off with ‘Bin Him’ and the mosh-pit detonates to critical mass. It is an angry punk ballad that needs to be played at a million decibels to that friend we all have – the one with the abusive, controlling partner. It is also a fabulous reminder that these anthems have a conscience along with a gargantuan desire to plumb the depths of rock vulgarity.

In the past, the lyrics of Alex have been misunderstood by the faint hearted as being offensively sexist. In fact they are the brutal honesty of a skating obsessed, teetotal, workaholic, ex-junkie whose tunes and poetry just keep getting better. He bares his soul, warts and all, with a massive heart and an enviable talent for song writing. 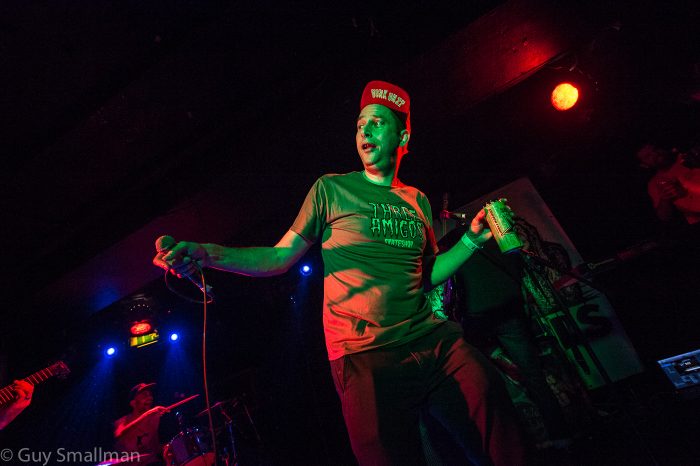 This band is definitely on a roll. Their latest offering being the incredible ‘Mr Splashy’, which is quite possibly one of the greatest melodious punk albums of the last twenty years. On top of this they have an impressive back catalogue of memorable choruses like ‘Los Angeles’ & ‘Idiotic Train Loony’, which cause the pit to explode yet further in the first ten minutes of the set.

From here until the end we get treated to the finest selection of wonkness on offer including the totally hyper ‘Nan’ and the fabulously grotesque ‘Kings Road Sporting Heroes’. The addition of keyboards & Jess Edwards on backing vocals make renditions of ‘Hot Day You Know It’ possible along with ‘My Nagging Wife’. For a band that just lost a key member they are not exactly struggling. In fact, they’re on fire.

The grand finale come steaming in with the thunderous rocking anthem that is ‘Awful Jeans’ and the final gut wrenching tragedy of ‘Stigmata (Johnny Rambo)’. For an encore we get the hilarious mania of  ‘We are the England’ a diatribe that mercilessly lampoons the concept of English greatness. These are sentiments, which I would usually wholeheartedly endorse. But not right here, right now in this little corner of Camden.

Because for just a few short hours bands like this and their supportive non-profit backers like TNS Records make ‘En-ger-land’ feel like the most wonderful place to be alive. A place of honesty, creativity, tolerance, diversity and most of all FUN!! 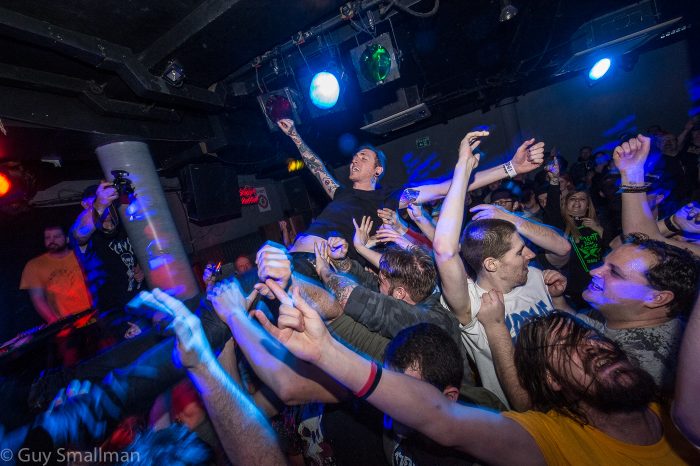 The TNS tour will be landing over the next two weekends in: Newcastle, Dundee, Edinburgh, Nottingham and Bristol.