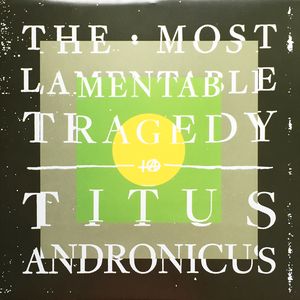 You could be forgiven for raising an eyebrow at the news that New Jersey’s Titus Andronicus have prepared for us ‘a rock opera in five acts’. How do you think I felt, when I realised I had to review it? Seriously though, there’s no need to be afraid. Far be it from me to disagree with the band or with Merge Records: if they say it’s a rock opera in five acts, then that’s what it is. And Titus Andronicus, remember, have previous when it comes to the similarly-derided format of the concept album, in the shape of 2010’s nonetheless successful, US Civil War-themed The Monitor. However, if I were you, I’d approach The Most Lamentable Tragedy first and foremost like an oversized canvas on which an already-accomplished band can really stretch themselves and deliver a definitive, lasting piece of work.

It’s a double CD or triple vinyl, so think big. Think London Calling or The River. Hell, think Blonde on Blonde or The White Album, why not? Don’t worry, I’m not catapulting Titus into that sanctified company just yet, but it’s fair to say that The Most Lamentable Tragedy, like the aforementioned, feels like a change of gear; a chance to see if the act can handle a monster truck after years putting in the miles in a reliable pick-up. Let me put this metaphor out of its misery: the answer is yes.

The story arc follows our unnamed, depressed leading man on a voyage of self-discovery precipitated by a meeting with his physically-identical but temperamentally-opposite doppelgänger. Rather like the chap in Dostoyevsky’s The Double, I suppose, except poor old Fyodor didn’t have the accumulated might of post-hardcore punk rock and roll at his disposal.

Of the daunting-looking twenty-nine tracks comprising this opus, maybe half a dozen are short, atmospheric passages, leaving almost two dozen substantive songs in which to tell the tale. The great majority hit hard as stand-alone songs so, to reiterate, don’t get too hung up on the opera thing. Without wanting to speak out of turn, a large part of me suspects that they’re taking the piss anyway, so in that spirit, let’s review this beast one act at a time.

The first clutch of songs, let’s call ’em Act I, set the bar HIGH. Songwriter Patrick Stickles leaves us in no doubt about the depths of our hero’s despair. No Future Part IV’s refrain of ‘I hate to be awake’ is just the start of a descent into lyrical gloom that culminates four songs later in Look Alive: ‘I look alive but inside I’m dead!’ If this all sounds a bit grim, it really isn’t. Points in between are crammed with nifty turns of phrase and some startling imagery. In the marvellous Stranded, for instance, we’re treated to cheeky Seinfeld and Public Enemy references, so any charges of a humour deficiency just won’t stick.

And then there’s the music, of course, the glorious, exhilarating music that invokes key Titus influences like The Clash and Springsteen as well as fellow-travelling contemporaries like Fucked Up. Plus, in the terrific Lonely Boy, T Rex collide with the Stones and one of my favourite songs of 2015 is born.

Act II kicks off with Lookalike, a supercharged forty-nine second burst of Generation X bootboy rock in which our tragic hero (let’s call him Titus for convenience) first encounters the guy who’s ‘trying on my face’. The line ‘there’s more on Earth than’s dreamt of in your psychology’ paraphrases another of the Bard’s eponymous heroes of course – the Danish one who couldn’t decide whether to kill himself or not.

Next up is the record’s first cover version: a superb take on Daniel Johnston’s I Lost My Mind, one of two tracks with this title to feature on the album. As you can see, Stickles and friends continue to display a healthily scant regard for convention.

Things take a turn for the epic with the magnificent Mr. E. Mann (say it aloud) which conjures up the romantic, million-selling version of The Clash, the one that was transfixed, not bored, with the USA. Fired Up and Dimed Out mine a similar musical seam while the lyrics explore connections between identity, drugs and God. These are some of the most towering tracks in the collection and indeed in the band’s catalogue.

The foot comes off the pedal slightly for More Perfect Union, or at least for its early stages. The track is almost a micro-opera in itself, beginning as a Poguesy family saga that builds into something far beefier via some lavish Celtic orchestration, and even finds time to lift the Ramones’ We’re A Happy Family for an unlikely middle eight.

There follows an actual intermission, and an opportunity to nip to the fridge for a beer.

Take your seats again, though, in time for Act III and the Ra-glorifying Sun Salutation. This leads into yet another standout rocker in (S)He Said/(S)He said. If I tell you it captures all the bedraggled magic of The Saints, I trust you’ll grasp the heights that Titus are scaling here. The final key track of this act is Fatal Flaw. Every tragic hero has one, after all, and ‘Titus’ lays bare the realities of his drug habit against a stirring musical backdrop that’s again part-Strummer, part-Boss and entirely great.

Act IV gets properly underway with Come On, Siobhan. A new love interest offers new hope for our hero in his struggle to find meaning outside of an oppressive Catholicism. I think. I’m not worrying unnecessarily about the narrative here. I mean, how many of us knew what was going on in Quadrophenia until we saw the film (or even afterwards, in respect of that final scene)? Anyway, Siobhan offers ‘Titus’ the same kind of redemption that Eileen offered Kevin Rowland in a similarly-titled chart-topper back in the 1980s. Appropriately, there’s something of the too-rye-aye about the euphoric strings arrangement here.

Staying in the 80s, there follows a cover of Shane MacGowan’s beautiful A Pair of Brown Eyes. It’s punked up, but not completely blunted, as can sometimes be the case when a band decides to reduce something so fragile to its base components. A sense of yearning remains intact beneath the barre chords. From MacGowan we move onto another great Celtic poet, Robbie Burns of course, for Auld Lang Syne. I’ll be honest with you: I’m lost now.

Back on track with the final number of the act, though. I’m Going Insane is a powerful punk rattler dusted with some flashy metal guitar flourishes.

We proceed into the final act via The Fall. Nothing to do with Mark Smith’s mob, but forty-seven seconds of descending electronic drone that you might uncharitably describe as filler, were it not to be found on an album so demonstrably not in need of any such thing. Ironically, the next track Into the Void is subtitled (filler) yet is anything but. Musically another Saints-like cantering rocker, the complex lyric revisits and recaps events to date, apparently concluding with a resolution to assassinate President Reagan, although that could just be wish-fulfilment on my part.

On the home straight now with No Future Part V. It’s a strong platform for pianist Elio DeLuca and recalls one of Nick Cave’s soul-baring confessionals, particularly in its use of prison and crucifixion imagery. Stable Boy contrasts the burdens of human existence with the blissful ignorance and consequent freedom of the animals, to a simple organ backing, and that almost wraps it up except for the closing ‘A Moral’. And guess what? There isn’t one, which is entirely in keeping with the spirit of this bewildering, disorientating but playful triumph.

It’s an album to love and to live with. It rocks hard but it knows when to take a breather. It’s the band’s finest achievement and the only tragedy would be if you were to ignore it.

All words by Glenn Airey. You can find more of Glenn’s writing for Louder Than War here or follow him on Twitter @GlennAirey.