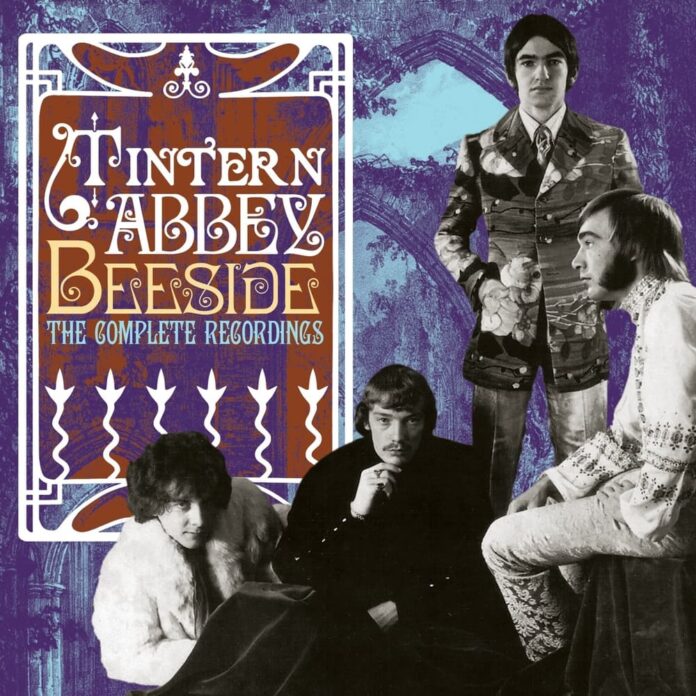 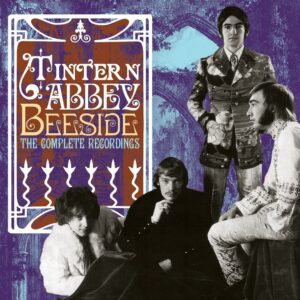 The complete works of UK psychedelic outfit Tintern Abbey, who have developed a cult following over the years due to their 1967 single Beeside/Vacuum Cleaner, brought together in one package. This set contains a wealth of previously-unissued material, with the band’s acetate recordings, demos and studio outtakes being aired for the first time. Ian Canty does the hoovering.

Deram Records DM 164, in commercial terms, wasn’t much of a success for the label. Decca’s progressive off-shoot put Tintern Abbey’s debut, Beeside/Vacuum Cleaner, out in the winter of 1967, with the hope it would prosper in the wake of fashionable psychedelic hits like See Emily Play by Pink Floyd and Procol Harum’s A Whiter Shade of Pale. But despite these favourable conditions and the record being suitably way-out, it unfortunately made virtually zero impact and quickly slid into record shop bargain bins. Though the record was unloved at the time, in fact this was a remarkable outing, even for a psychedelic 7-inch. Lashings of echo and feedback, and a savage guitar break, give Vacuum Cleaner a unique period feel and Beeside phases out in a stunningly chilled way after a serene piano intro.

Given the lack of response the single received, it was no real surprise that not much more was heard from Tintern Abbey. A projected 1968 follow-up on Deram, How Do I Feel Today?/Do What You Must, failed to appear and though there were whispers in the music press of sessions for a TA album release, nothing was forthcoming. The band worked on some new material, but split up in 1969 and that seemed to be that.

Whilst the various band members then got on with other things, Tintern Abbey’s sole single was playing the long game. Over the years, the record has been rediscovered by psychedelic crate diggers as one of the great lost singles of the era and that, in turn, has sparked renewed interest in the band itself. Further material leaked out sparingly, an EP of tracks recorded in 1968 emerging in 2006 and a few demo items creeping out on ‘various artists’ albums, along with Beeside and Vacuum Cleaner becoming mainstays on psych/freakbeat compilations.

But what about the enigmatic band behind the record? The formation of Tintern Abbey began in 1967, when guitarist Don Smith, a member of The Turnkeys, saw David MacTavish playing as part of a forgotten band in an Earl’s Court club. The pair plotted a new venture and when David bumped into Stuart Mackay at the local job centre, they had found their bass player. Mackay, originally part of Yorkshire band The Sect, had stayed on in London when his band broke up and went back home up North. The final part in the jigsaw was drummer John Dalton, again picked out by Smith when taking in another group at the fashionable Cromwellian nightspot. Naming themselves after Wordsworth’s famous poem, Tintern Abbey were born.

After cutting a couple of tunes, Busy Bee (an early version of Beeside) and Black Jack, in July 1967 at the now-famed R.G. Jones Studio in Morden, South London, the band found a backer in wealthy rich kid Nigel Samuel, somewhat of a 1960s mover and shaker. The band found a base in the former headquarters of The International Times in swanky Knightsbridge. Samuel had bankrolled the paper and his influence had the double-edged sword of the band being well-represented and overexposed in its pages.

Tintern Abbey were then sent to a Cornwall cottage by Samuel to focus on their music. “Getting yourself together in the country” wasn’t unheard of for psych bands at the time and this gave the group an opportunity to work on their craft, away from the worries of the world. As it happens, their stay attracted the unwanted attention of the local old bill, who didn’t much care for what they must have thought were a bunch of long-haired layabouts on their manor.

On their return from the sojourn in the South West, Nigel Samuel had got the band a deal on the Deram record label, who had high hopes for them being their first psychedelic stars. Tintern Abbey had worked on developing the song Vacuum Cleaner whilst in Cornwall. It had its roots in another police raid they endured on receipt of the new speakers Samuel had purchased for them and the need to vacuum their abode before another visit from the drugs squad. The song featured on the flipside of Busy Bee, now renamed Beeside, and was inspired by, of all people, veteran comic Arthur Askey. The record flopped, but received some encouraging reviews.

Not all was well with Tintern Abbey and soon a fissure appeared between pill-popper Don Smith and the rest of the band, who in their leisure time were more drawn towards cannabis. The two habits produced diametrical effects, so something had to give and Smith left the band. His replacement was Paul Brett, who had previously played in Arthur Brown’s band. The band selected him after snubbing a certain David Gilmour. Brett didn’t last too long and was replaced himself by Colin Foster, and John Wilson came in on drums for Dalton. This version of the band worked on some new numbers, many of which make up disc two of this set, but called it a day for good early on in 1969.

The first disc of this set naturally starts with Tintern Abbey’s sole 60s single. It still sounds like nothing else and terrific, plus we get further mixes of both tunes from acetates and Busy Bee, the prototype Beeside. Their Cornish adventure is commemorated with the squalling guitar instrumental Bodmin Blow. Snowman, a possible follow-up to Beeside, features in two acetate versions added to a Master 2 take on the second disc of this set. Not opting with it as a follow-up to Beeside reveals itself, in hindsight, to be an error. The band rated it highly; it’s the kind of blissed-out psych daftness that is just utterly charming. The lyric, “hundreds of snowmen marching towards the sun,” had me think, “They would melt surely?”, but it does not diminish its daffy greatness.

A spine-tingling folk-rock influence pervades Tanya and the early demo Black Jack is a simple but decent beat-pop item with slide guitar. The fast moving My Prayer comes complete with some neat weird-out guitar effects and the proposed flip to the ill-fated and weak How Do I Feel Today? Do What You Must is spirited and atmospheric. I really enjoyed Hookah, a wild psych-rocker and if the audio of People Can’t See is a bit dodgy, it represents a pleasant change of emphasis. This disc ends with Naked Song (AKA Seeds Of Discord), a light psych item which also suffers a bit in terms of sound.

The second disc, in the main, concentrates on the later period of the band. Nightfall gets things off to a good start, a breezy and bright number despite the silliness of the lyric and Mrs Daisy, in its two versions here, comes over as a decent stab at a Kinks character study with some good trumpet work. Blues Pants isn’t a time-travelling Homer Simpson reference; instead this is a nursery rhyme-like shot of whimsy and Magic Horseman and the jolly bubblegum of Come Into My Zoo both benefit from some tasteful keyboards, probably from Terry Goldberg, who also joined the band for a spell.

A breakneck My House is flash and exciting and although the sound on Raspberry Ripple is a bit rough, the tune itself is a monster of freewheeling momentum. Tintern take the guitar riff and go crazy, right into an extended rave-up jam. They then return to the original theme, setting things up for an explosive finish. Reaching For Nothing mixes surf drums, vocal harmonies and restrained, then unleashed power well and if Witchcraft harks back to a similar subject matter as Nightfall, it does so in a tough garage-rock way.

The more sedate Something still has some of the cutting guitar that was a TA touchstone, but Strange Dame (which I read as Strange Dave at first) feels a bit too Pink Floyd-influenced. It’s not bad, though, and this disc and the set ends with the superior Master 2 cut of Snowman, complete with backwards coda, which again brings home the lost potential of the track.

The problem with collections like this is that Tintern Abbey’s reputation rests on that wonderful but lost single. Other material has the stiff task of trying to measure up to it, and including a load of weak, hardly-finished efforts would only have the negative effect of lessening the band’s mystique. Luckily, the vast majority of what is featured here is up to the task. It is enough to suggest they could have even lived up to the Nigel Samuel-generated hype, given the opportunity.

There is certainly a great Tintern Abbey that could be pieced together from the two discs here, but psychedelic enthusiasts will be delighted to find that the whole story is included. With an authoritative booklet that has observations from band members Don Smith and Stuart Mackay, Beeside sets out the Tintern Abbey story well and portrays a band with plenty of ability in the psychedelic pop stakes, aside from that classic single.