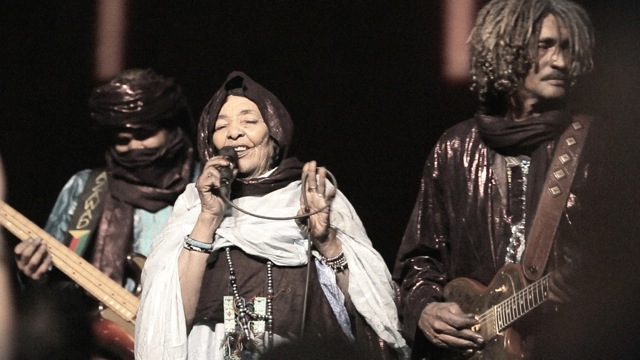 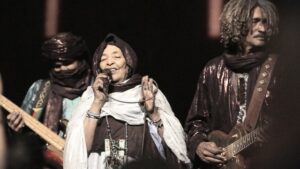 Tinariwen have announced details of the release of a live album – Live In Paris, Oukis N’Asuf which will be released on Friday November 20th 2015 on Wedge.

The album was recorded at a very special concert at the Bouffes du Nord in Paris on Saturday 13th December 2014 and features the band performing alongside 75-year-old ‘grand dame’ of Tamashek culture Lalla Badi.

The track listing is as follows:

Additionally a limited edition version of the album will be available featuring a gig poster designed by Chris Hopewell of Jacknife Prints (www.jacknifeposters.bigcartel.com). Limited to 250 copies, the posters will be hand numbered and signed.

To buy the album head here:

The album’s title, Oukis N’Asuf, which, translated literally, means to take away, forget or get over heart-ache and longing. Asuf – the longing of the soul – conjures up the feeling of separation from the Touareg camp, the physical environment of the desert, its emptiness, its blackness, and its spirits.

“When you feel asuf” says bassist Eyadou ag Leche, “you get shivers all over your skin.”

A hypnotic evening of guitar and tindé (small mortar drum covered by a taut goatskin) normally reserved for more in intimate spaces – around a fire in the desert in southern Algeria perhaps, or in the yard of a house somewhere in the northern Mali – this very special show came at the very end of a tour comprising more than 130 dates, undertaken in part to promote their last album Emmaar.

Lalla Badi, who remains the queen of tindé (a word that denotes both an instrument played exclusively by women, and a poetic repertoire which is sung at ceremonies and special occasions), is originally from Timiaoune in the far south of the Algerian Sahara and now lives in Tamanrasset.

She became a mentor to the Touareg in the 1970s, thanks both to her mastery of this musical genre and her commitment to the Touareg cause. Back then she took in the ishumars (unemployed vagrants), those Touareg who had set off to Libya in search of a better life.

Like them, the future members of Tinariwen also fled repression and the crippling droughts of northern Mali in those dark years, stopping off in Algeria along the way. Lalla Badi took them under her wing, became like a mother to them, a big sister, an accomplice and the performance in Paris, her first show in France in over thirty years, gave Tinarwen the opportunity to show their respect and gratitude.