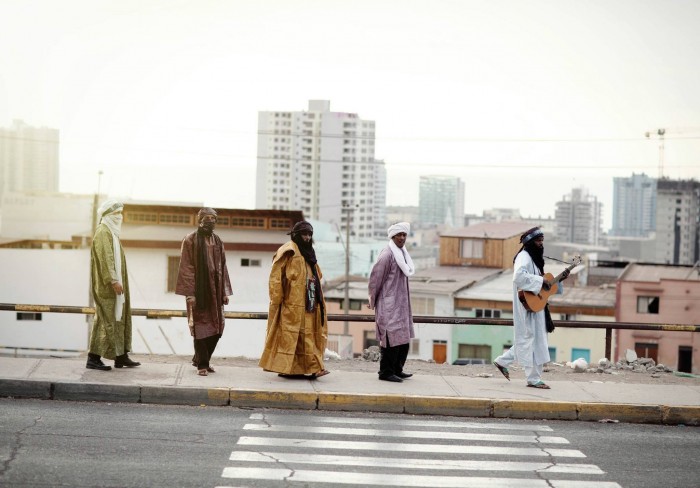 The story of Tinariwen is fairly well known to the music world by now – a band of Tuareg desert tribesmen, bonded during rebel wars in Mali and Libya, gradually finding an enthusiastic audience beyond African shores. These days political unrest has led to the collective relocating to the Arizona desert but their musical mission remains potent.

It all still sounds such an improbable tale that, were they suddenly to be unmasked and revealed as a collective of cabaret circuit veterans from Wolverhampton, it might seem easy to nod wisely and profess to have suspected all along. But tonight here they are, on the expansive stage and plush surrounds of Manchester’s Bridgewater Hall, the designated home of the Halle Orchestra, six impressively robed figures swapping the Sahara for soaring urban constructions. Gently amused eyes peer out behind swathed turban veils and head-dresses – a look which is unlikely to speed their progress through airport customs but one which instantly confers anticipation.

They open slowly, with low wails and chants over a gentle percussive pulse. Desert vistas are conjured, audience heads begin to involuntarily sway. Guitars add to the mix, a hazy, blues trance which ebbs and flows in beautiful simplicity. Voices call and respond, guitars chime and drone around fluid snakecharmer bass lines and hand-percussion heartbeats.

With the collective’s most recognisable face, founder father Ibrahim Ag Ajhabib, absent due to home pressures (which given the political situation, may mean more than a broken boiler needing fixing) the remaining members exchange vocal and guitar duties, with genial acoustic guitarist Abdallah Ag Alhousseyni acting as closest to a front man, offering a polite “Ca va? Is OK?” at the end of most songs.

Fellow founder Alhassane Ag Touhami is the group’s most enthusiastic dancer and no mean guitarist, resembling an extravagantly robed Russ Meyer, while the dashingly handsome new boy Elaga Ag Hamid smiles wryly while firing off some superb guitar playing without any noticeable effort. The rhythm section underpins the evening with an economy and efficiency that would have James Brown shaking his head in admiration – trance grooves follow one after the other, the musicians swaying lightly and the guitarists’ fingers coaxing elegant, infectious patterns which effortlessly shift gear like a musical Rolls Royce.

Outside, the endless roadworks and construction sites and homeless encampments of 21st century Britain provide one distinct backdrop. Swapping one nomadic lifestyle for another, the roaming players of Tinariwen simply transport their Saharan homeland with them. Stunning.