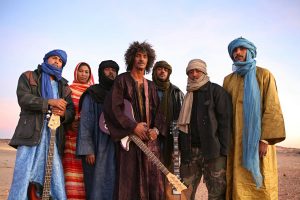 Tinariwen have been busy since last time I saw them play Bristol, a gig that was, somewhat incongruously I thought, at that very personification of corporate rock, the O2 Academy. This time the gig was at Bristol’s Colston Hall rather than the O2. Being owned by the council rather than corporate monsters I was somewhat reassured that the gig was going to be less about fleecing us & more about the music. Having said that it did feel like they were perhaps overcharging us with tickets that, unless you paid with cash at the venue, were over Ã‚Â£20, especially when you factor in that the bands founder & leader, Ibrahim Ag Alhabib, was absent.(He was caught up in the ructions in his homeland where he was “protecting” (their rather ominous word not mine) his family). I was dubious as to whether they’d come close to filling out a 2000 capacity venue with tickets priced so high, something which actually turned out to be the case – there were maybe 200 people there I’d guess.

Tinariwen have not only been busy making music & touring since last I saw them they’ve also been busy making celebrity friends. Famous admirer’s include Robert Plant (who cites Tinariwen as his favourite band), Tom Yorke, Henry Rollins, Rolling Stones & members of TV On The Radio. They’ve even made records with some of these artists & although when I first heard about these collaborations I grumbled something along the lines of “I’d rather they just made records with themselves” these collaborations have, in the main, produced good stuff, stuff imbued more with the spirit of Tinariwen than with the artists they were working with. Having said that, when I saw the YouTube video of them jamming with Bono at this years Festival In The Dessert it kind of made me groan (this is the polite version of what I wrote on my Tumblr, didn’t feel a full on anti Bono rant was appropriate here). I’d feel remiss if I added the link to the YouTube video here, if you really must see it then google away. But I’d advise against.

Of course I needn’t have worried about the music not being up to scratch even with Ibrahim absent. I was a bit annoyed to arrive at 8.30 (doors were 8.00) to find they’d already started. I’ve only ever been to one gig without a support band before & then the band played two sets, both over an hour long, separated by an intermission. I’ll give them the benefit of the doubt & assume that the support had fallen ill or something but even so I know for a fact that there are dozens of Bristol bands who would’ve given their collective right arms to support a band like Tinariwen, and not to use your social media outlets to let people know the gig was going to start at 8.30 & finish at 9.30 when every other gig in the city ends at 11ish was a bit negligent I thought.

I’ve been a fan of Tinariwen for yonks now. I can clearly remember the first time I heard Andy Kershaw play something by them. It totally floored me in the same way that Peel playing something by The Smiths floored me the first time. That shock of realising you’re hearing something totally original & totally brilliant at the same. Having said that, I’ve got to be honest and will admit that their last album, Tassili, was one of my least favourite of theirs. It was a bit too ‘slow burn’ for me I’m afraid. You can call me “Judas” if you like but their faster electric sound is more my kind of thing & I wasn’t convinced this slower stuff was going to make for a great live show.

Fortunately though, tonight they weren’t all about the slow burn. The band were on good, jovial form & I was right, the fact that they were minus Ibrahim didn’t matter in the least. Indeed, I’m willing to bet that his absence was only noticed by people who already knew he wasn’t going to be there. I’ve seen them a few times now & this performance was as good as any. Their low slung rambling refrains are imbued with all the weight and history of the African continent & no matter where you’re listening to them you’re transported to the African continent. The Western press like to pigeonhole their sound as “dessert blues” which, of course, is bollocks & a classic case of the Western press trying to romanticise an artist. In reality their sound is romantic enough on it’s own & to have moniker’s made up for them that allude to a traditionally American sound like the blues is somewhat offensive, especially considering Tinariwen’s sound is so deeply suggestive of Africa – even listening to those collaborations with Western artists all you can think of is Africa.

They played for a touch over an hour, reconfiguring each song so that although it was recognisable as the recorded version it was also very different as they rolled out their trademark playful jams & exhibited their dexterity by fluctuating between acoustic & electric instruments. All this while maintaining banter with the audience. French banter, admittedly, but as most of the longer speeches included the word “Ibrahim” I’m guessing they were telling us about the travails in their homeland & explaining his absence. Another feature of Tinariwen shows is to repeatedly enquire “Ãƒâ€¡a va” during the evening, something of course that inevitably gets cried back & forth between audience & band all night long, always good humouredly.

I was surprised more people weren’t dancing as all there songs have rollicking good grooves that they emphasise when playing them live. I certainly find it impossible to keep still when listening to them. Perhaps everyone was too busy clapping along to dance. Not a great fan of people who clap at gigs myself but I guess it’s inevitable when you’ve got a band as rhythmic as Tinariwen with their foundation of pounding drums & taut bass over which Abdallah Ag Alhousseyni lays the bands fluctuating sweeping guitar sound. That everyone was enjoying it was unquestionable, the end of each song was greeted with roof lifting applause & whoops & as I was edging out afterwards I heard no end of “wow, that was amazing”‘s. The fact that they are a completely self taught collective is something that never fails to stagger me.

There seems to be a dichotomy in world music these days between what I’ll call “beardy” world music fans & “hipster” world music fans. This is particularly noticeable in Bristol as the “beardy” artists, (e.g. Toumani Diabate), will play at the gleaming, bright, clean, airy St Georges whereas the “hipster” artists, (e.g. Omar Souleyman) will play at a venue like The Croft, which is kind of like the complete opposite. There is very rarely any crossover between the audiences & whereas the former, (mainly middle aged & middle class), sits politely through the performance, swaying a bit & clapping along, the latter, (younger, less well off), dance their faces off & bounce off the walls. Tinariwen are perhaps the only artist who can claim to span both camps. This was noticeable in tonight’s audience makeup, although there were definitely rather more of the beardy types – something that’ll become more & more the case if they keep on charging over Ã‚Â£20 for tickets.

It’s really sad there wasn’t a bigger audience to watch them. It’s not my place to speculate about these kind of things I guess but I can’t help but feel if they’d dropped the ticket price to Ã‚Â£12 say they’d have got at least twice as many people here. Including a well known local band would’ve had similar effect too I feel. Certainly that last gig at the O2, with supports, was a far better attended affair. Maybe the band need to sit down with their management & have a serious talk about ‘things’. I’m sure the band would prefer to get a bigger audience even if it meant less takings. (And as I’ve already explained, charging less doesn’t necessarily mean less takings). As someone who goes to about 3 gigs a week I can’t really afford to pay over Ã‚Â£20 for tickets – Indeed, this is the first time I have paid that much for a ticket & as I only heard about an hours music I didn’t feel like it represented good value for money.

Despite everything I’m going to do my darnedest to remember the gig for the music because the music, at the end of the day, was flipping great.