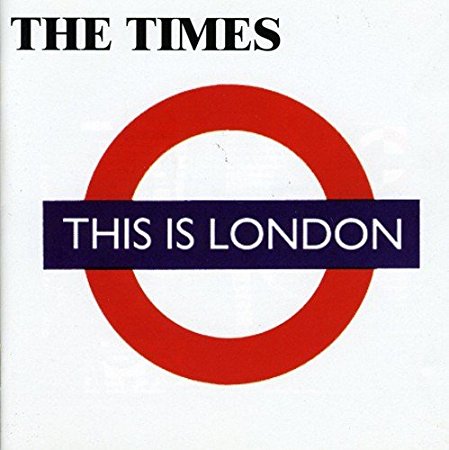 Go With The Time, This Is London

Reissue of two early and now hard to get albums by the Television Personalities spin-off band The Times, helmed by singer/guitarist/song-writer Ed Ball……LTW’s Ian Canty recalls how the times somehow got high in the staid mid-80s

Ed Ball’s (not to be confused with that MP) The Times, have for a long while been an object of fascination for me. In fact this preoccupation was kicked off by stumbling on the first of the albums presented here in the mid-80s, This Is London, whilst pottering around aimless in a now defunct Eastleigh Record Shop.

The Times had a sizeable history before I finally cottoned on to them on that fateful afternoon in 1984. Part of this history includes the second album here Go With The Times, which although being recorded in 1980 before their first official album Pop Goes Art, was only released to the general public five years later.

The band’s existence started as a spin-off from the Television Personalities. Various other group names were used by the members of the TVPs during the late 70s like The Teenage Filmstars, O Level, and Teen 78, usually featuring Ball among their ranks. The Teenage Filmstars in particular can be seen as the true forerunner to the Times, their first single (There’s A) Cloud Over Liverpool being reprised on This Is London. With the Times though Ed really struck out on his own, departing the parent act entirely around the time of first Times LP which emerged in 1981.

Ray Kent and John East made up the trio in the original Times line-up and after extricating himself fully from the Television Personalities, he settled into a career of song-writing excellence. Though they dwelled on the edges of the both the Mod Revival and ’81 New Psychedelia scenes and were no doubt influenced by Punk, the Times sat outside of pretty much everything going on at the time in their own peculiar spot. This position meant they were always the outsiders, absorbing and watching events unfold, always with a satirical bent which Ed put to good use in his songs.

In many ways on This Is London Ball picked up the baton from Ray Davies, in documenting the goings on in England’s capital with a similarly keen eye and cutting observational skills. This is a London approached with the hopeful dreams of the out-of-towner, which is often brought shatteringly into the realism and drudgery of real life in the Smoke. Thematically there’s a similarity to Murray Head’s fatalistic early 70s album Nigel Lived, which focussed on one poor soul’s descent into madness after living on the fringes of the Swinging London scene.

The title track which opens the record, is all about the highs and lows, even though it still has a great catchy chorus. Ed never came up short of tunes at this stage in the Times’ career and if the next song Goodbye Piccadilly is even darker (with a very, very black joke of using the words “Swinging London” as a metaphor for suicide), it comes with an addictive melody. Whatever Happened To Thamesbeat? deviates a little, spoofing the brief Power Pop phase of 1978, when bands like the Pleasers (London based Beatles nuts) were for a short time the next big thing. If Only could be a distant cousin of Weller’s That’s Entertainment and Big Painting a cool shout out to the Creation’s Painter Man.

On side two Stranger Than Fiction has a little Soul influence that even sounds a little like Graham Parker and The Chimes Of Big Ben is a flashback to the Teenage Filmstars’ Ska circa Odd Man Out. For the bulk of the album though the Times play an amalgam of Mod, New Wave and ironically given the Thamesbeat song, Power Pop and jolly good they are at it too. Having said it the short Will Success Spoil Frank Summit? has a sort of Smithers-Jones strings quality to it and the idea behind the song pointed the way to the later Times concept albums. Then there is the euphoric (There’s A) Cloud Over Liverpool, yes it doesn’t quite fit the concept but what a tune. Overall it is one of the few early 80s albums I play regularly still.

Go With The Times is a totally different kettle of fish. Originally recorded in 1980 as the debut album of the Teenage Filmstars, it marked the change over into the Times. The record finally made its way to release in 1985, five years later. This feels like a band still finding its feet, but they are slowly working towards the quality that we were to see on the later albums like This Is London. There are flashes of excellence, along with more filler-type material.

The cover of Generation X’s Your Generation takes it back to the Mod Pop roots, but is in truth a little underwhelming in comparison with the explosive original. The two other versions, Nowhere To Run originally sung by Martha and the Vandellas and Jimmy Cliff’s You Can Get It If You Really Want It, are adequate enough without adding too much. Both are rendered in the Times 60s influenced style, but feel a little like filler. The original material is where the real interest in Go lies though and reveals the developing talent of Ed Ball, finally given full reign in his own band.

My Andy Warhol Poster is a great piece of thrashing Jam style Pop and The Joke’s On Zandra spoofs the fashion designer Rhodes with a sparky Garage Punk sound. The low backing vocals on I’m With You enliven this Beatlesque gem, with the single Red With Purple Flashes being a fine attempt at 80s Freakbeat. Pinstripes herald’s Ed honing his song-writing skills with a character study of home life that could have come from the pen of the older Davies brother in 1965. But Go With The Times is a bit of a Curate’s Egg with those covers not really adding much.

After Go…. was released Ball developed the concepts hinted at on This Is London into full blown albums like Enjoy and the soundtrack to the Joe Orton play Up Against It (Ball and fellow New Psych traveller Tony Conway of Mood Six helped put on the show in West London as well as providing the tunes). After these very enjoyable records he immersed himself in rave culture, with the Manchester and Pure records documenting this scene. Being signed to Creation since 1988, he quietly phased out the Times name in the early 90s and continued on a solo career from there on in. The work under his own name had some highpoints but lacked the creation and intensity of This Is London and the later concept works.

No extra tracks are included on these new reissues – they are duplicating the original releases, which is how a lot of people prefer to hear them. This Is London is the ideal introduction into the Times world, with Go With The Times being perhaps more for the confirmed fan. In any case, it is good to see these albums available once again for a new audience to enjoy.