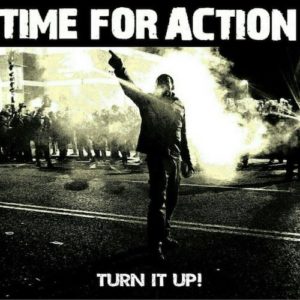 Formed in Manchester in late 2017 taking musicial influences including The Damned, Slaughter And The Dogs, The Clash and Public Enemy, Time For Action have recently released their debut album Turn It Up on Strawberry Moon Recordings. The album sees Dermo fronting a much heavier song base compared to his indie pop blissed out band Northside. Nonetheless, the distinctive Dermo Manc-tinged tones are still there with the additional of a Johnny Rotten type growl. Matt Mead interviews Dermo here exclusively for Louder Than War.

LTW: Can you please let me know your first musical memory?

Dermo: My first musical memory is hearing the opening riff to ‘Alternative Ulster’ by Stiff little Fingers. It blew my mind then, still does and always will.

Punk. I loved the energy, imagery and attitude. I still do.

When did you first start singing and writing music?

I first started singing at my first Northside practice in 1988. Never sang before that. First music I wrote was around the same time.

What were some of the first songs you wrote?

Moody Places and Shall We Take A Trip? Moody just flew out of my pen, practically wrote itself and Trip was my first real attempt at writing lyrics with substance.

Who did you look up to as a musical influence in your early career?

Your new band Time For Action have quite a different sound to Northside. How did you meet the rest of the band?

I met Simon our guitarist through Facebook. He was a fan of Northside and would send me ideas for songs that he had, that he’d like me to sing on and help write with him. I wasn’t interested at first, because I wasn’t in a good place within myself. But he persisted and in the end I listened and liked what I heard. I knew I could do something with what he was sending me as it was the sound that’s in my DNA. We met up and I liked him and his drive. So we started writing together. Usually, in the pub with an acoustic guitar and a pen and paper. pretty quickly we had an albums worth of songs. I’ve known Neil and Keith (bass and drums) for years, through the local music scene. I knew they could both play and just importantly I liked them as people. They fitted in straight away and brought their own ideas and style that fitted instantly to the sound we were creating.

I’ve pretty much answered that in the last question. Of the songs we’ve wrote so far, either Simon or myself has come up with the original idea and then it’s progressed from there. Then Simon will usually record a rough demo at home and send that to Neil and Keith. Then we’ll all go in the practice room and finalise everything.

Has the sound of the band naturally or was there a specific sound the band wanted to make?

Me and Simon agreed from the very start that we wanted an high energy sound but definitely with catchy songs and big choruses. Also with serious lyrics that mean something to people. I’ve always said, if you’ve got something worth saying, then say it.

You’ve just released your debut album. How did the album come about?

The songs were ready and so were we, so we booked ourselves into the studio. We recorded it all very quickly as we were tight as a band and the engineer understood us and let us make the record we wanted to make.

Where did you record the album?

We recorded the album in Brunswick Mill Studios, Ancoats, Manchester. We paid for the recording ourselves and have just released it through our record label, Strawberry Moon Records, who are doing a great job with it.

Do you have plans to go on the road with the band?

Yes, definitely. I/we love playing live, it really is where we love to be. Hopefully the album will reach people everywhere and that’s where we want to play, everywhere.

What are your future plans with the band?

To take it as far as we possibly can. A likeminded manager and promoter would be able to help us with that. The album has only just come out so we’ll see what the response is like. In the couple of days that it’s been out (as I’m writing this) the response has been great, really has. We want to keep writing, recording, playing live and hopefully be able to make a full time career out of it.

Turn It Up! by TFA