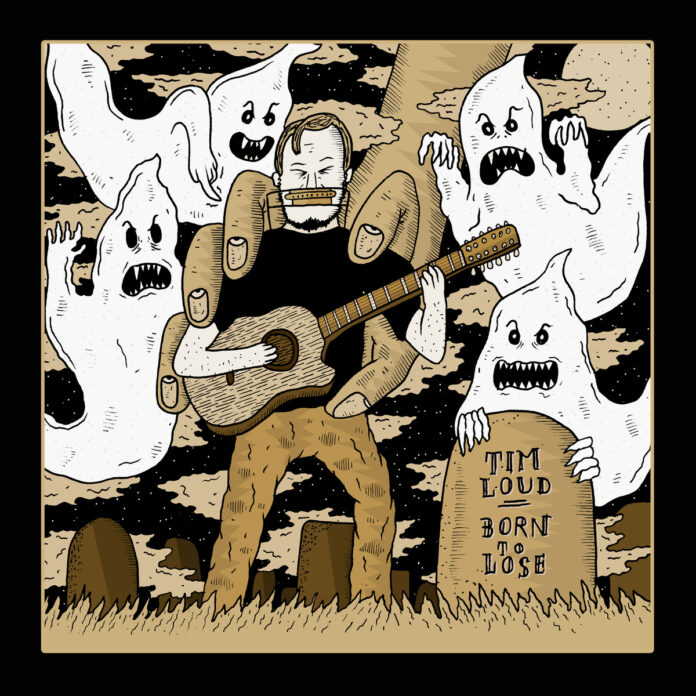 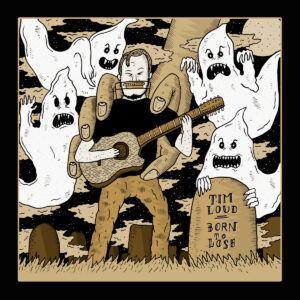 Well this one took me by surprise; I saw the TNS Records logo so mentally prepared myself for the aural equivalent of a street fight – perhaps if I had looked more closely at the cover art, the harmonica and acoustic guitar should have been a clue; a bigger hint would have been the name Tim Loud, but reasons I can’t fathom I failed to recognise the name as being a member of the mighty Bootscraper…

I really don’t want anyone else to overlook this absolute blinder of a release, 8 tracks of rabid country/blues with a dollop of folk thrown in for good measure make up this debut album the follow up to the ‘Tim Loud’ (Nov 2012) and ‘Eaten Alive by Wormfees’ (Sept 2014) EP’s.

For ‘Born To Lose’ Tim has gathered together a raft of friends and like-minded musicians who have brought warmth and substance to his heartfelt compositions as he takes on a journey into themes of rebellion, defeat, misanthropy, lust, regret, joy and defiance title – the title track ‘Born To Lose’ commences with a wailing harmonica, before being augmented by drum, bass and some subtle piano, whilst ‘Is That All There Is?’ is pure ho-down, it’s unfair to compare to another artist, but this is like a semi acoustic version of Th’ Legendary Shack Shakers, Tim’s deeply resonating voice effortlessly giving Colonel JD Wilkes a run for his money.

Tim is clearly an accomplished songwriter, as he reduces the pace during the ever so slightly melancholic ‘November Sky’ complete with a lamenting violin – there is something about the timbre of Tim’s voice, it instantly connects, as you listen you visualise yourself with a group of friends, perhaps sat around a campfire not long after the festival headliners have wrapped up, someone powers up a stereo and throws this into the CD player; the party begins again, the liquor flows and before you know it dawn is breaking…this album really is that good!

‘Age Of The Idiot’ hints at Tim’s sense of musical humour, the delivery is a weird mashup of Capt. Hotknives, perhaps Half Man Half Biscuit, Pete Bentham & The Dinner Ladies, though for ‘Nomad Blues’ he returns to violin driven, booze fuelled twisted country with a touch of washboard – we need more washboard in rock ‘n’ roll!

TNS Records work under the banner ‘Get Pissed, Talk Shit, Dance Like An Idiot’ – Tim Loud has provided them and you with the perfect soundtrack to do exactly that.