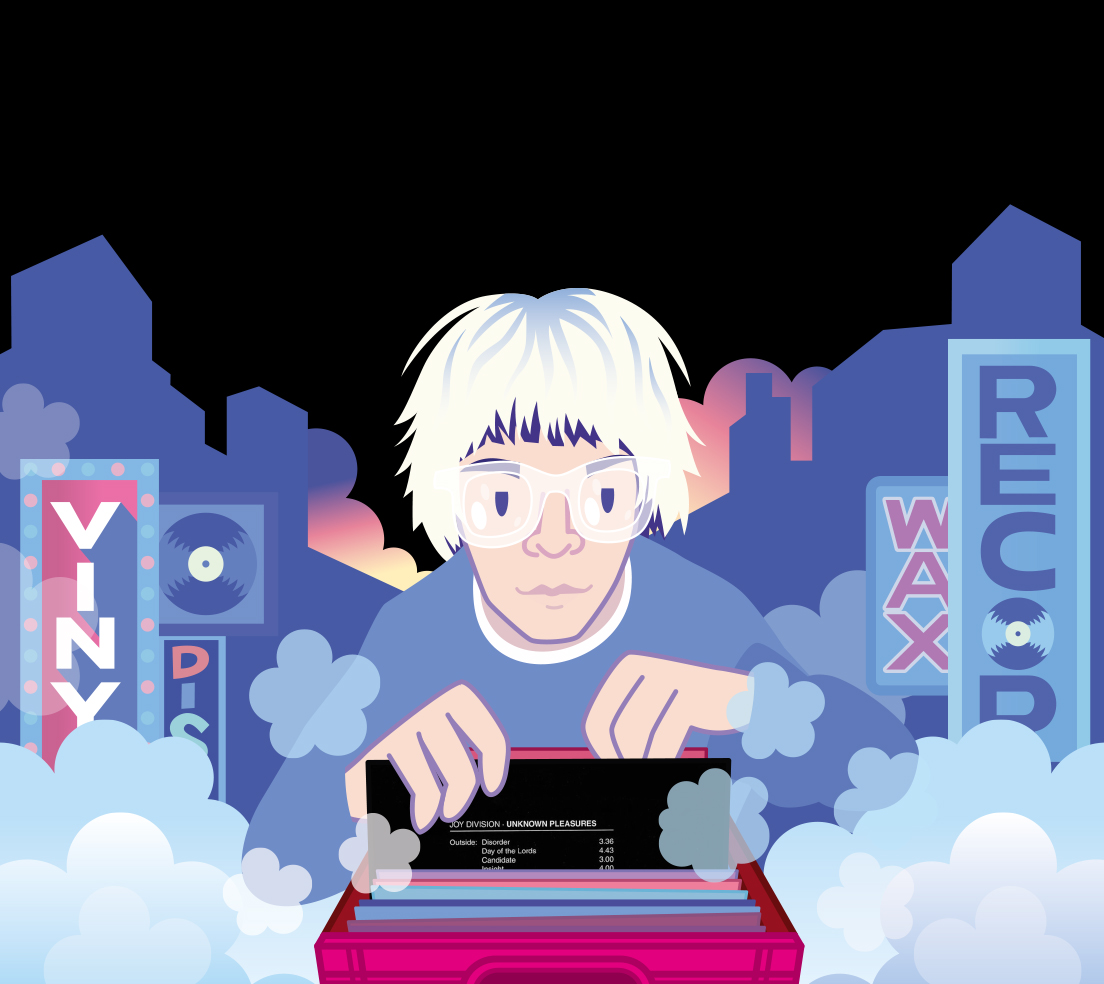 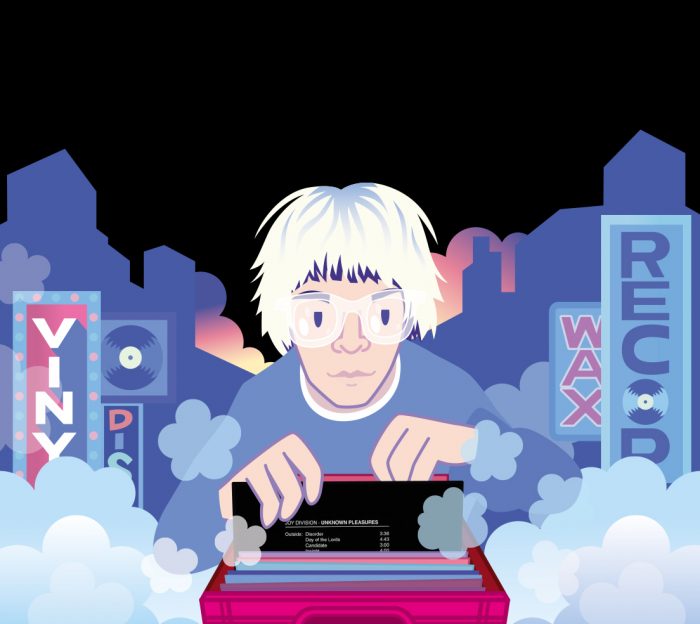 The second book from Tim Burgess finds The Charlatans’ frontman indulging his lifelong passion for vinyl by tackling a quest to track down records recommended to him by everyone from Iggy Pop to Johnny Marr. It’s accompanied by a compilation of tracks from the records featured in the book, to be released on Tim’s own label O Genesis.

The bell above the door tinkles quietly as it’s gently pushed closed behind the last customer, and you watch from your seat at the counter as the proprietor slowly turns the sign to ‘closed’ and the neon sign above the parking lot fizzes and blinks into darkness.

The coffee pot hisses on the hotplate and across the room the glowing jukebox drops another record into place. As the needle whirrs through the run in groove, the proprietor smiles and pushes the last piece of the day’s damn fine cherry pie toward you.

Tim Burgess, frontman of The Charlatans, solo artist, record label owner, author and proprietor of the usually virtual Tim Peaks Diner has been on a quest.

Following on from his candid memoir Telling Stories he got a taste for writing and interest from Faber & Faber to publish a second book. Rather than update his autobiography, albeit with some significant events in his life including becoming a father, he decided to write about what he loves and set himself a quest.

Vinyl Adventures from Istanbul to San Francisco is a chatty, anecdote-laden page-turner; a ‘moving account of a life in records’. The premise is formed around the self-appointed quest; Tim asked people he admired to recommend him an album and then set out to dig through the crates of the world’s record shops to find a copy, to learn the story of the record and artist but also the connection and meaning to the person who recommended it. Nesting cups of stories from which the music overflows.

As you may expect the list of heroes and friends on which Burgess calls are as varied as they are impressive: Iggy Pop, Lauren Laverne, Ian Rankin, John Cooper Clarke, Paddy Considine, Cosey Fanni Tutti, David Lynch, Kim Gordon and more. Each respond to his request with a short note, a brief directive for his mission that through the book is now declassified and open for us all to share. It means the quest itself, the records, are the star of this book rather than the author. This may be the privileged quest most of us record collectors can only dream of but that is kept in check by Burgess’ infectious enthusiasm for music and records; joyous field reports back to his tribe.

Woven around the stories and the music are a couple of interesting themes lightly touched upon. The acknowledgement that record collecting is still a pursued by a high propensity of males, and how the record shop experience reflects and supports a modern masculinity away from the tired macho trope of uncultured, physical peacocking being the way to go for real men. At times it the book Burgess acknowledges how the intricacies of counter-crate chat, the common ground immediately found through collecting, is a safe harbour for connecting with strangers being both intimate but reassuringly impersonal.

The other undercurrent to the quest is a commentary on the social, economic and cultural change undergoing music and the record industry. This is not academic critique but a Bill Bryson-esque observational thread which brings in the changes Burgess has seen in the availability of records in his lifetime, his own changing habits, and the fortunes of some of the shops he’s patronised on his travels.

These are flashes through the main business of finding, acquiring and listening to records. There are many who describe Burgess as a ‘force for good’ and in this second book, and the accompanying compilation soundtrack, he shares this through a deep and honest love of music.

Whether your favourite sound is the soft pad of record sleeves falling forward as you walk your fingers through the rack, or you’ve wondered why this format is so enduringly and deeply loved above others, or you simply want to know what the connection between Throbbing Gristle and ABBA Gold, the quest undertaken here will lead you  through that dusty groove, between the crates in exotic and pragmatic record shops alike.

It is an indulgence for Burgess to write of his passion but for the reader it is just as gratifying to become a passive sidekick on the quest as it was to read wide-eyed at The Charlatans hey day rock n roll excess. Conversational in tone, enthusiastic by nature, Tim Book Two is a great addition to any music-lovers bookshelf; a light and entertaining read fully brought to life by the accompanying soundtrack.

The Vinyl Adventures from Istanbul to San Francisco book is published by Faber & Faber in hardback and paperback on 21 July. You can order here.

The accompanying compilation of tracks taken from the records featured in the book is released on O Genesis on 29 July as a limited coloured double vinyl, CD and download. You can order here.

All words by Sarah Lay. Sarah is editor of Louder Than War and you can find her on Twitter and her blog. She provides the LTW recommended track of the week on Radio Andra’s The Rumble – tune in from 8pm each Tuesday or download as a podcast.