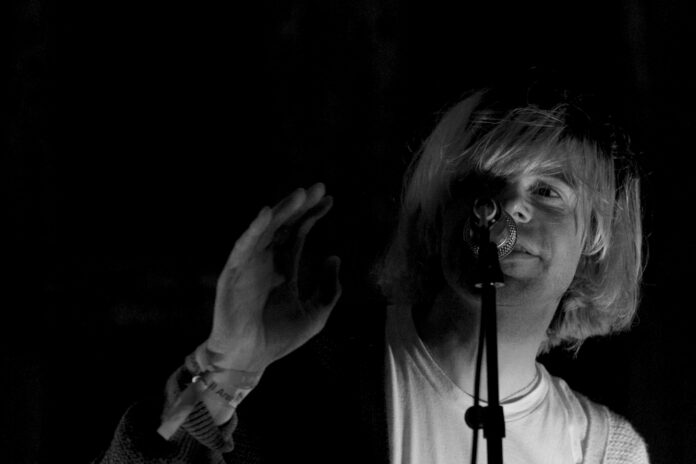 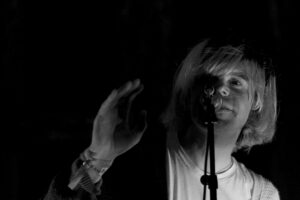 With a roster of artists from the Membranes and Minny Pops to Slowgun and Hatcham Social, Tim Burgess’s O Genesis Recordings has emerged as an independent label triumph.

As a compilation of the label’s artists is released (And Now Our Lives Are Complete) Sarah Lay managed a quick chat with Tim about the highs and lows of running a label and how his own career as a musician fuelled his love of record shops.

In recent years O Genesis has become a label dear to me, one of those labels where it’s as much about the collection as it is the individual releases. It’s about beginning to trust that what is being curated, not only inadvertently crosses with your music taste, but will also lead you to great discoveries too.

And although I have collected the releases one by one I was still excited to hear the recent compilation, And Now Our Lives Are Complete. What will serve as an excellent taster for some new to the label, for those familiar already it is a reminder of the journey that’s been taken – from the spoken word of Jack Underwood, releases by new artists like Slowgun, the experimental artistry of Nik Colk Void, to putting out records by veterans like Minny Pops. It is all here and then some.

And behind it all is Tim Burgess, frontman of The Charlatans, solo artist, author and connoisseur of the virtual coffee empire Tim Peaks. With all of those feathers in his cap what drove him to start O Genesis?

“For as long as I’ve been buying vinyl, I’ve always had a thing about labels. I didn’t really understand what they did but I knew The Ramones were on Sire, The Clash were on CBS and Crass had their own independent thing. I’d look at all the names in the independent chart and just got a real fascination with what they were and who was behind them.

“Then, along came Factory and I fell in love with what they did. I suppose ever since that day, I’ve wanted to have a record label. The time was never right – then a few friends (he runs the label alongside Jim Spencer , Nic Void and Nick Fraser) and I got together and O Genesis was born.”

Aside from Factory does Tim have a favourite label?

“That’s a tough one – I love lots of different ones for different reasons. Yes, Factory, also Crass Records, Heavenly, Wichita, Domino, City Slang, Rough Trade and Not Not Fun.”

Like the records that Tim has loved as a musician and music fan himself does he hope that people like the label and trust it for consistency of quality, as much as they love an individual release on the imprint?

“I’m hoping that people would be fans of the label as well as individual records too. I’m not sure if I’m too close to the eye of the storm as I love everything that gets released, so I’m a little biased. But yeah, I’m hoping that someone who likes Slowgun would check out Throwing Up and like what they hear.

“We’ve had some encouraging words from people like Paul Weller, Lauren Laverne, Kurt Wagner and John Kennedy – they all have a deep love and appreciation for music. They’re all music fans and they’re a great benchmark to know we’re doing at least some things right.”

And owning a label must be a great opportunity to put out releases by bands you’re already a fan of. O Genesis is a mix of established artists and emerging bands – was this mix a definite decision made on the direction they would go in?

“It was a great honour to put out the new material by Minny Pops and get them to play at Tim Peaks (the virtual diner from Twitter that now rocks up at real world festivals across summer) – we’re more about putting out records we love than spending too much time pondering whether it’s old, new or what other people might want.

“I think we struck a chord with a few people too. A few weeks ago a band called Dub Sex got in touch. They had recently played together and played for the first time in 25 years. While they were going through their archive they found a recording that they had done with Martin Hannett in the late ’80s, O Genesis was the first label they thought of and we loved the record and we’re releasing it.

“There’s no rules as to who we would release records by, The Vaccines wanted to work with R. Stevie Moore and that just had O Genesis written all over it. But yeah, no real rules.”

Labels take time though. From choosing what to release, through the recording, manufacturing and promotion processes – the independent label is a handful of people carried through it all by the shared passion for the music.

Tim says the real challenge is finding “enough hours in the day” to do it all but that is balanced by the many high points. What’s the best bit about running a label, I ask?

“Maybe it’s like asking a parent about their favourite child. Each time we’ve brought out a new record, being sent that first copy – all pristine with amazing artwork. It’s a high point every time.”

“I’m going to say And Now Our Lives Are Complete. It’s maybe like a photo album with pictures of all the kids in.”

What the compilation does very well is show the arts angle to the label. Without ever explicitly setting out with an arts agenda the label manages to move popular music more towards that wider, and sometimes elitist, arts realm.

The inclusion of three spoken word pieces by Jack Underwood top, tail and serve as a break from the music in the middle of the album. Alongside more experimental tracks such as Emma by Education for Death and Gold E by Factory Floor’s Nik Colk Void it moves the overall curation of the label away from the relative safety of dreamy or punk pop and towards a more cerebral but nevertheless accessible space.

Away from the compilation the individual releases generally find themselves on vinyl but art also makes it’s way into the sleeves. For the 7″ of Gold E the sleeve – or rather a living sound piece – cast of the record was made in polyurethane plastic that can be played, but that degrades with each spin so the recording also changes over time.

“We take care over everything – right down to an inscription in each run out groove. We hope we can do something that the people making the record really love. From Ian Rankin’s story to Nik Void’s record sleeve.

“I’ve always loved records that made an effort – metal box by PIL, Zaireeka by The Flaming Lips. We don’t want to be out there for the sake of it – we just like it out there!”

And when it comes to distributing the releases how important is the record shop to the process? Is Tim as much in love with the flick-flack of thumbing through the racks and being introduced to something new by knowledgable staff, the original human form of ‘if you like that, try this’?

“Record shops are hugely important – they need the support of everyone who likes music. There’s 10 or 12 record shops I visit regularly. Where they know me and make suggestions as what I might like to hear.

“Ever since the first time I saw a record I’d made sitting on the shelves, I’ve felt I owe them something and I’ll always do what I can to help out.”

So, three years into the label what’s the plan for what happens next?

“Just to keep on keeping on.”

At Louder Than War we love independent labels and artists doing it for themselves (we even run a label to release artists we fall for). We’d like to introduce more people to more labels – so tell us, who’s your favourite label? Which independent imprint is the one you know you can trust before you’ve even heard the release? Let us know by leaving a comment below, tweeting us or dropping a comment on our Facebook page.

Tim and The Charlatans will play Benicassim in Spain this July – tickets available here.

Image by Hayley Taylor at Shot by Hayley.

Interview by Sarah Lay. You can read more of her articles on Louder Than War from her author’s profile or you can follow her on Twitter.