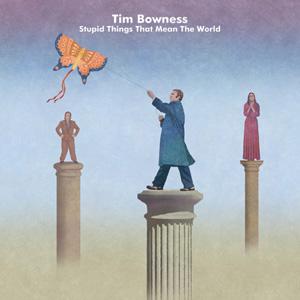 Primarily known in rock circles as the vocalist and writer in the band No-Man alongside former Porcupine Tree main man and general Prog God, Steven Wilson, Tim Bowness has a multitude of strings to his bow. As well as running the specialist Burning Shed online label / store, he remains an active jobbing musician. ‘Stupid Things That Mean The World’ is his third solo album which gets the once over from Mike Ainscoe.

It’s saying something for Tim Bowness’ output when the InsideOut press release has to restrict itself to a selected discography. As far as solo projects are concerned, Tim’s 2004 debut ‘My Hotel Year’ was followed by ‘Abandoned Dancehall Dreams’ in 2014 straight off the back of which comes the new album.

It could be said that he’s on a bit of a roll with the new material being played out by a well-established set of names: alongside members of the No-Man live band in Michael Bearpark, Andrew Brooker and Stephen Bennett who adds his writing skills to the project, Pineapple Thief’s Bruce Soord not only does the mix but adds smatterings of choice guitar. Add to that musical contributions from Peter Hammill, Phil Manzanera, Pat Mastelotto, Anna Phoebe and David Rhodes (and shame on anyone who doesn’t instantly recognise at least one of those names) and it’s quite a mouth-watering line up. With another Pineapple Thief in Steve Kitch involved in mastering the album, it’s almost like Tim has moved away from his old sparring partner Steven Wilson and found himself more Pineapple Thief than Porcupine Tree.

Not to say that ‘Stupid Things That Mean The World’ is in anyway derivative, as it has all the hallmarks of the distinctive Bowness sound. Developing from his last album, he continues with his typically melancholy-cum-art rock style, opening with the untypical heavier drum and guitar-based slow builder, ’The Great Electric Teenage Dream’, which name checks the album title and sets a lyrical bar for the record as it builds towards a hypnotic and overpowering climax.

‘Sing To Me’ – a song brought to fruition from an earlier No-Man demo, is a fully formed prog classic with a gem of a short guitar solo to die for which has all the hallmarks of a Steven Wilson influence; not surprising given its origins. An early strike and as good as some of the best moments he’s done with No-Man and Mr Wilson. Anyone interested enough can pick up the original 1994 demo on the bonus/companion CD which comes in the special edition. He’s confessed himself surprised, quite rightly, that it was overlooked in the first place.

Lyrically, there are all sorts of clues as to where he’s coming from on this record. Little gems like “you lost the plot before the plot was hatched” which appears on the title track, sets off an Andy Summers-like percussive guitar before a lush wash adds a coating of class. The pick of the first half at nearly seven minutes – the longest track on the album  – is the faraway sentiment of ‘Know That You Were Loved’ with an extended instrumental coda which reinforces the wistful quality and kind of sums up what the album seems to be about. Lines like “falling headfirst for the girl with the red in her hair” epitomise the nostalgic recollection quality of the album. Ending with the lyric “the darkness is closing in – the silence is closing in – but it’s ok” just beware it just doesn’t sneak up and catch you out and cause the eyes to start stinging or a lump in the throat moment.

If you want a darker ride, ‘Press Reset’ is a much more intense journey – building slowly and developing into something akin to a dense drums and bass track overlaid with strings. A story of regret and things you’d want to forget and a desperate need to start again. The closing track ‘At The End Of The Holiday’ appears quite literal, lyrically expressing those feelings “before your life feels real again”/“in a week she’ll be back on track” – has a museum Hammond organ feel to accentuate the feeling of something of the past.

Tim Bowness has always been represented by that dreamy quality tinged with a hint of what they call pop sensibilities without being too sugary or overtly commercial. His signature sound , whether it be solo, No-Man, Henry Fool or some other partnership is instantly recognisable as that distant wistful voice, whether captured against a simple acoustic guitar, swathes of keyboards or a more rock-based backing.

Someone must surely have said it but what Tim Bowness creates is something which can’t help but recall the classic tones of Nick Drake; understated, underrated and very English, making music which conjures up visions ranging from the lavish and expansive to the delicate and intimate. His career has parallelled, to some degree, that of his old pal Steven Wilson whose Porcupine Tree success might seem to now be on hold while he ploughs a very successful solo furrow. Maybe the Bowness solo voyage will take a similar path.

You can find Tim Bowness  online here: timbowness.co.uk. He is  also on Facebook and tweets as @TimBowness.