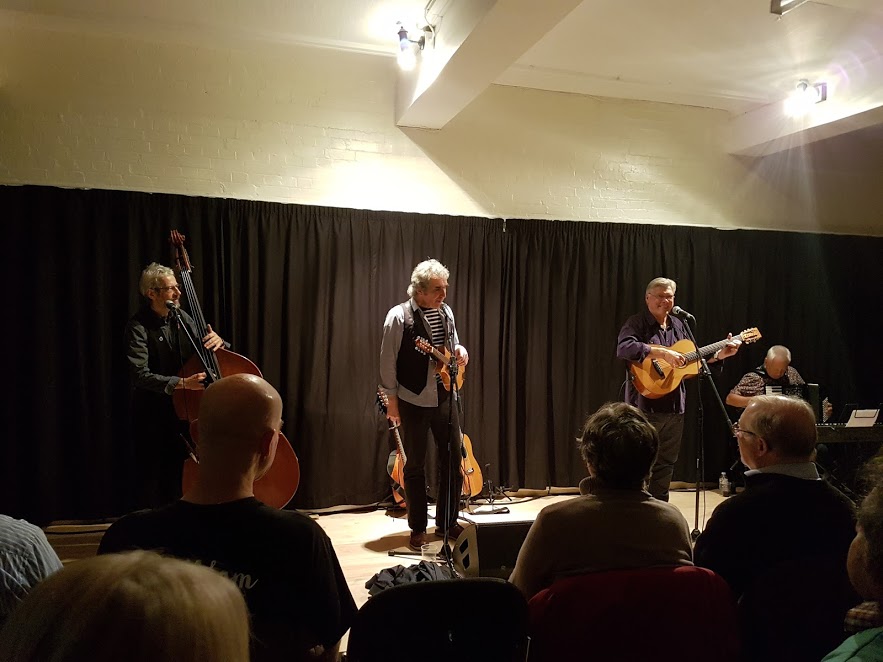 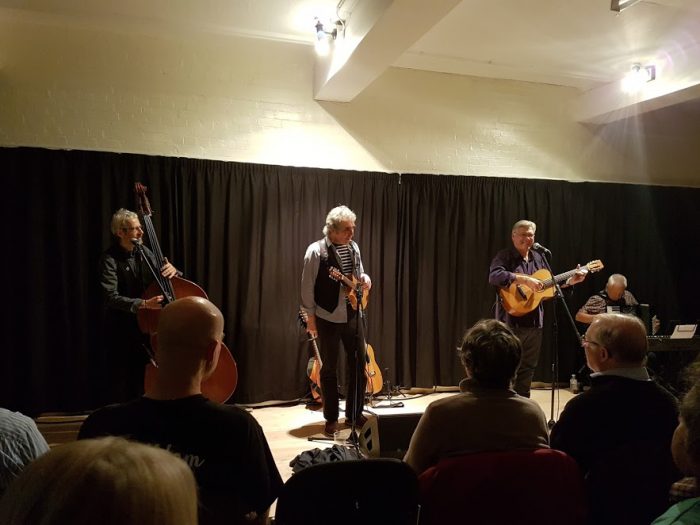 A night of folk music at Cecil Sharp House with the excellent musicianship of Steve Tilston and Jez Lowe. Louder Than War’s Craig Chaligne reviews.

The two musicians teamed up a couple of years ago to record an excellent LP  titled The Janus Game. The duo for this London show was augmented by Hugh Bradley on upright bass and Chris Parkinson on keyboard and accordion (a line up appropriately named The Tilston Lowe Sometimers) . A rare occasion to hear Tilston play in a band context (Lowe regularly tours with his Bad Pennies).

The show taking place in the intimate setting of The Trefusis Hall saw the duo open with two old songs, Tilston’s “Oil and Water” (which he was once invited to play on Later with Jools Holland) and Lowe’s “Jack Common’s Anthem” based on the famed novelist. Years on the road have enabled Tilston and Lowe to handle an audience to perfection, anecdotes (whether historical or humorous) coupled with quality songs made for a great show. Numerous songs from their joint LP “The Janus Game” were played including the great title track. Lowe did most of the introductions  giving great insight on the subjects of “The Waga Moon”, “Lucky Sami” and “Shiney Row”. Tilston then closed the “first bracket” (what they call a set in Australia he explained) with two of his own songs that included one of his most famous tracks “The Road When I Was Young”.

After a short break, the “second bracket” started with “Mrs Einstein” that Jez introduced by telling that behind every great man, there is a great woman to much approval from the ladies in the audience. Tilston sung on a tribute to his mentor Wizz Jones titled “The Strings That Wizz Once Strummed” inspired by an encounter after a gig in Mexborough, an excellent track with a ragtime feel that enabled Chris Parkinson to play some great runs on his keyboard. Again another great song intro by Jez for “Crosses, Crescents and Stars” that depicts the disappearance of religion in the public life while Tilston’s “Leaving For Spain” depicted the journey of a girl from the north of England to a supposedly better life in Spain (one of the album’s greatest tracks). A mainstay of Lowe’s repertoire “The Brockie Lads” was followed by Tilston’s “Lasting Love” from his most recent solo LP “Truth To Tell”. An excellent anti war song titled “You Won’t Make Old Bones” and “Slips, Jigs and Reels” closed off this second bracket in style. The distance between Trefusis Hall and the dressing room meant that the encore ritual had to be spared of its showbiz elements but musically it proved perfect with a great version of “On Beacon Hill”.