Tigers Jaw has announced they will embark on a UK tour this August alongside their album release. 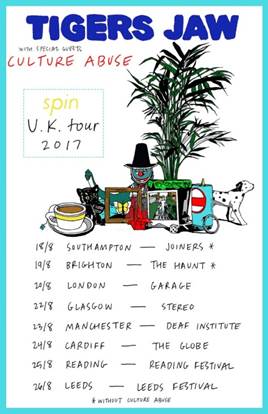 The UK tour will start at Southampton’s Joiners and the six date tour culminates with sets at the Reading and Leeds Festival.

They will be supported, on the selective dates by San Francisco Bay Area’s Culture Abuse . The four piece deliver a distinct mix of power pop melodies with punk, garage rock all with a generous dash of hardcore.

Pennsylvanian indie-rock duo Tigers Jaw recently announced details of their fifth studio album titled Spin. The album is to be released on 18 August 2017. We are advised will find the band having stretching out sonically and lyrically. Ben Walsh having tried something new by experimenting with stream-of-consciousness writing to express his ideas in an unfiltered fashion this time around.

The full UK Tour dates are as follows:

Tickets for all dates are on sale now. Please check the Tigers Jaw’s own social media pages for links to tickets purchase options or contact the venues directly.

Album pre-orders are now open at and from the band’s store* on CD, limited edition blue vinyl. There are also bundles with merchandise options. ‘spin’ can also be pre ordered from iTunes as a digital download. *All pre-orders receive instant downloads of ‘Guardian’ and ‘June’.

All words by Katie Clare. More interviews, articles and reviews by Katie on Louder Than War can be found at her author’s archive. She can also be found on Twitter where she uses @tokyo_katie.