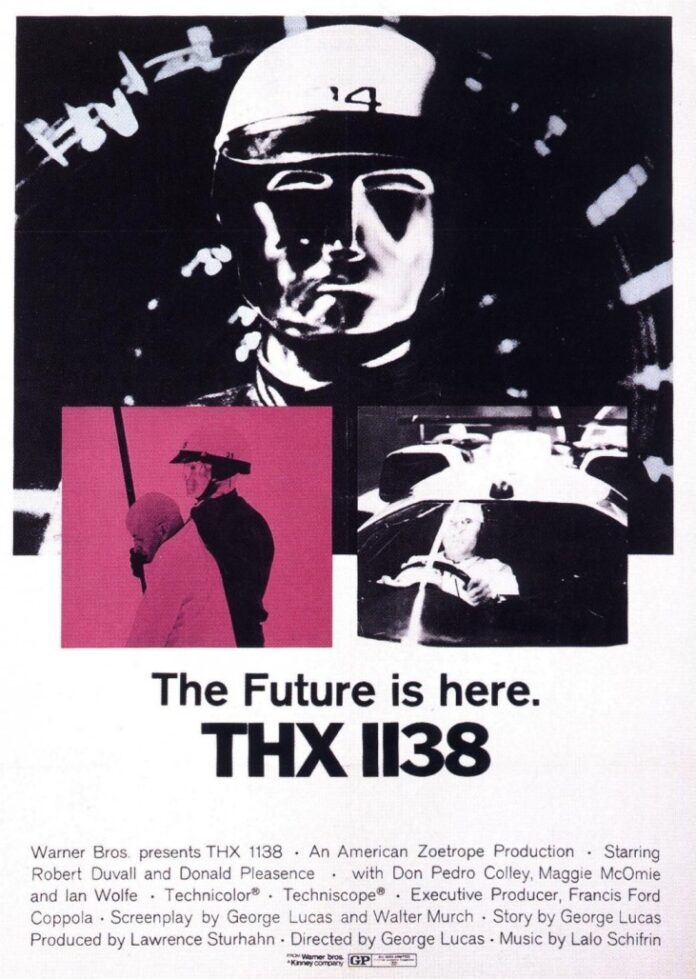 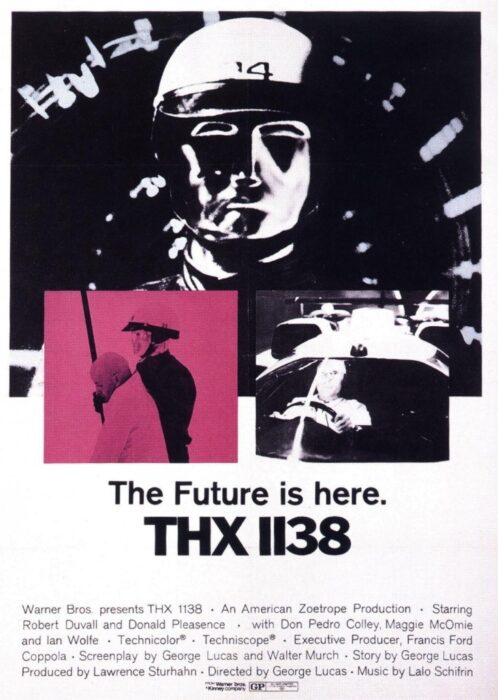 Released in 1971, George Lucas’s debut feature THX1138 is a unique breed of film. A chilling dystopian fantasy set in an Orwellian future where moodstabilizing drugs are mandatory, sex is prohibited, and a young Robert Duval quietly rages against the system. Its lack of plot and dialogue confused audiences and studio executives alike, but ever since, the film has gained in acceptance becoming a cult classic.

It is masterly directed by Lucas, who presents a wholly believable future with the very small budget he had at his disposal. Much of the film was shot in real locations in and around San Francisco. The then unfinished Bay Area Rapid Transport system was used extensively as well as the Airport and Marin County Civic Centre in San Rafael designed by Frank Lloyd Wright. It features first class acting from Robert Duvall and Donald Pleasance. The hundreds of extras who also had to save their heads like the leads were recruited from a nearby addiction recovery program.

Tonight’s presentation brings together this classic film and Asian Dub Foundation’s rescoring of the soundtrack originally by Lalo Shifrin, who is most famous for his work on Dirty Harry. Shifrin’s music is very sparse throughout the film, with most of the it coming from the sound effects department. Asian Dub Foundation’s trademark fusion of punk, electronic beats, reggae, bhangra, and hip-hop has attracted many famous fans, from Primal Scream to Radiohead, Sinead O’Connor to Chuck D, all former touring partners and studio collaborators. They aren’t new to this process, having re-scored Mathieu Kassovitz’s 1995 modern classic La Haine in 2001 and Gillo Pontecorvo’s intense 1966 war epic The Battle of Algiers in 2004.

The band are set up below the massive screen showing the film; Rocky Singh on Drums, Martin Savale, a.k.a. Babu Stormz on Bass, Steve Savale on Guitar, and Nathan ‘Flutebox’ Lee on Flute. The performance is a masterclass in restraint and tension, with the band cutting in and out of the action on screen adding to the tone perfectly. One stand out moment is when all eyes shifted to Nathan Lee, who gave us some of his ‘fluteboxing’. Playing his flute whilst simultaneously mouthing out a beat underneath, a breathtaking sight.

The dub style bass playing of Babu Stormz brought some heavy duty subsonic, whilst Savale ocasionally ripped some incredible sounds from his guitar. It wasn’t until the last 20 minutes whilst ramping up for the end chase scene that they really got going with some fantastic ‘drum and bass’ beats from Singh, creating a seriously exciting addition to the futuristic soundtrack already there. The band truly added another dimension to the film, helping make a classic become timeless and as relevant as ever.