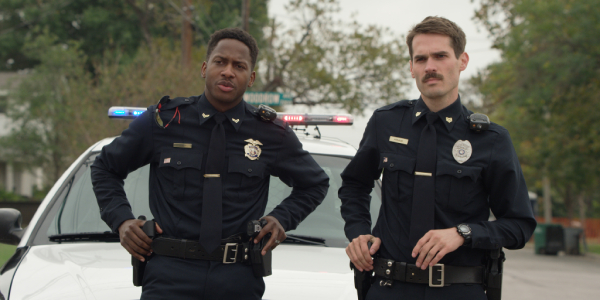 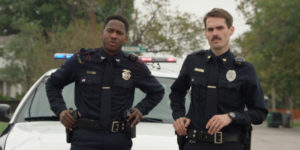 Small town Texas is where Jonathan Bradshaw learns about friendship, grief and desperation through the eyes of an eccentric police officer who has a penchant for awkward dance moves in Thunder Road.

Jim Cummings has had a meteoric rise to prominence in so short a time. After the short film version of Thunder Road won the grand jury prize at the Sundance Film Festival, Cummings embarked on a quest using the power of crowdfunding to finance a feature length film. He succeeded and this is what you’re going to be reading about today.

Taking its title from the Bruce Springsteen song of the same name, we first see officer Jim Arnaud (Jim Cummings) nervously prepare for his eulogy at his mother’s funeral, which will include a rendition of Thunder Road. The cinematography and composition, in the beginning, frames Jim as if he’s on a stage, which is convenient as he goes through a multitude of emotions all in the space of 12 minutes. This monologue and performance can also be seen as Cummings introducing himself to the world and gives an indication of things to come.

The film features many scenes that are just long takes that can last for up to 4 minutes. These scenes are well blocked as Cummings makes sure that everyone moves with purpose.  The film also makes the audience think about what the characters are doing off-screen, as the sound design and Arnaud’s facial expressions give fuel for the audience’s imagination. This cinematography also makes great use of the space and the audience becomes a floating eye, watching Arnaud traverse through the narrative.

Conflict runs throughout the narrative in the form of Arnaud’s relationship with his separated partner Rosalind Arnaud (Jocelyn DeBoer) over the custody of their daughter Crystal (Kendal Farr). Jim’s style of parenting is conservative and by the books as he chastises Crystal for wearing makeup, no doubt an effect of Rosalind’s parenting.

While he attempts to continue to conduct normal police work with his partner Nate Lewis (Nican Robinson), we see Arnaud put up a barrier as a method of deflecting from his inner grief.  During an encounter between the officers and a drunken man, Arnaud takes the obscenities being shouted personally and begins to aggressively restrain him. He has to be held back by Lewis and faces a telling-off by The Captain (Bill Wise). The barrier also causes Jim to say many stupid things that get him in trouble. He wishes that Rosalind would be hit by a train at the crossing, which comes back to bite him later on in the film.

With this barrier up, Jim also comes across as very desperate and to some extent acts like a child himself. At a parents’ evening, Jim acts inappropriately in front of Crystal’s teacher Dustin Zahn (Macon Blair), which is ironic as he in there to talk about Crystal’s bad behaviour! Due to an unforeseen circumstance, Jim also alienates his friend Nate and they have a minor scuffle in which Jim is majorly embarrassed. However, Cummings shows us how the basic principles of friendship work, as even though they both fall out, Nate goes round to see his friend for a drink and some baseball, showing that despite their quarrel, deep down they are still great friends.

The acting in this film is good across the board but the definite standout is Cummings. He has an uncanny ability to cry on command, in both humorous and sad moments in the narrative. Arnaud’s look is also very striking both in and out of uniform, all helped by his fabulous moustache. Cummings‘ acting also works to present Arnaud as the flawed hero. Even though he wears the badge of the law, he isn’t wholly lawful and the audience see the mental effects of his situation wear him down physically, sometimes with humorous results.

With Thunder Road Cummings has exploded onto the indie film scene and this film is his calling card. The film sits nicely in-between comedy and serious drama. It’s funny at times but never turns into a full-blown comedy and the dark moments don’t verge on the cliche. Arnaud’s journey is one worth taking and Springsteen’s song is well honoured in this film.