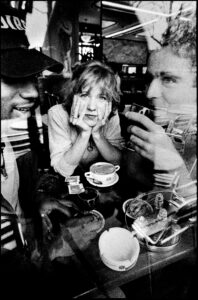 Legendary Boston trio, Throwing Muses, return with another video to promote their forthcoming album, Sun Racket, which is out in September on Fire Records.

Throwing Muses will return with their tenth studio album, Sun Racket, in September. The album, released on Fire Records, marks the bands first since 2013’s Purgatory/Paradise and Louder Than War have the first showing of their new video for the track Dark Blue.

Of the song, frontwoman Kristin Hersh says: “Dark Blue starts in California, drives to New Orleans, then flies to Reykjavik. I think it ends in dark New England at a blue table covered in blue flowers; my kitchen by the ocean last year. Sorta grim, kinda pretty. I had to mimic the feedback of my favorite old effects pedal, which had been drowned and melted. This wasn’t a bad thing; in fact, I haven’t been able to recreate the perfect combination of drowning and melting this thing went through in new pedals, which is why I had to fake it. So the guitar feedback and harmonics are an approximation of what water and fire do to a soul, I guess. To the soul of a machine, anyway. Ultimately, Dark Blue says that in running from black holes, you only increase their density and drawing power. They will cross time zones to hunt you down in dreams and songs to tell you that you’re loved, whether or not you wanna know that.”

Check out the video for Dark Blue below:

Sun Racket will be reviewed in full soon on Louder Than War.

It is currently available here on pre-order.