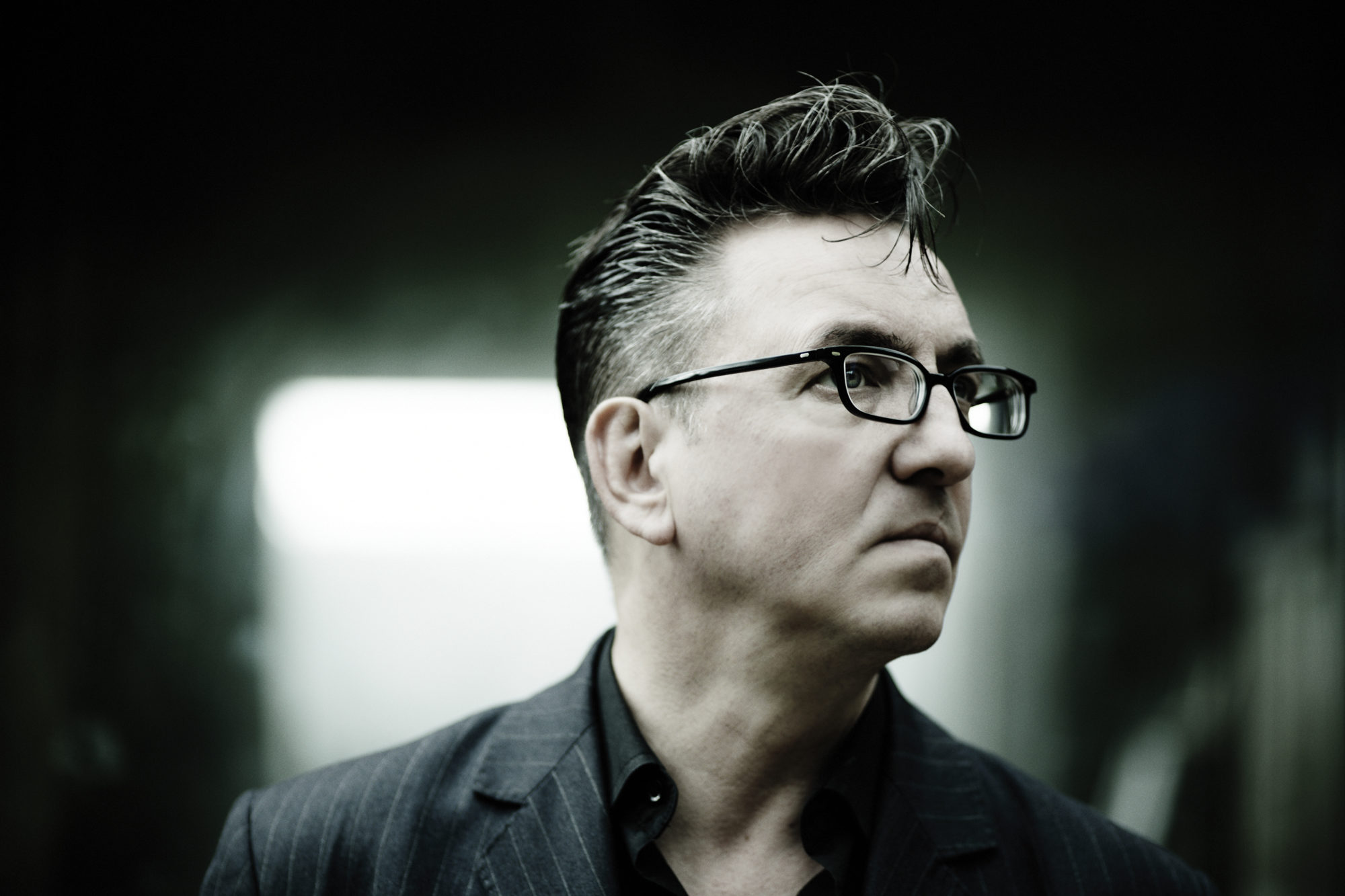 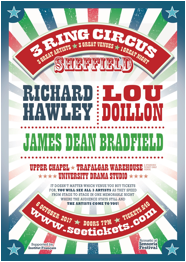 One night, 3 venues and 3 amazing artists.

“My Grandad used to say, when things were chaotic with twenty million grandkids in the house, ‘it’s like a three ring circus in here'”

“What the hell is The Three Ring Circus?” you may ask. A unique musical event that involves 3 amazing artists playing 3 shows each all on the same night in 3 small venues all with a very different atmosphere. 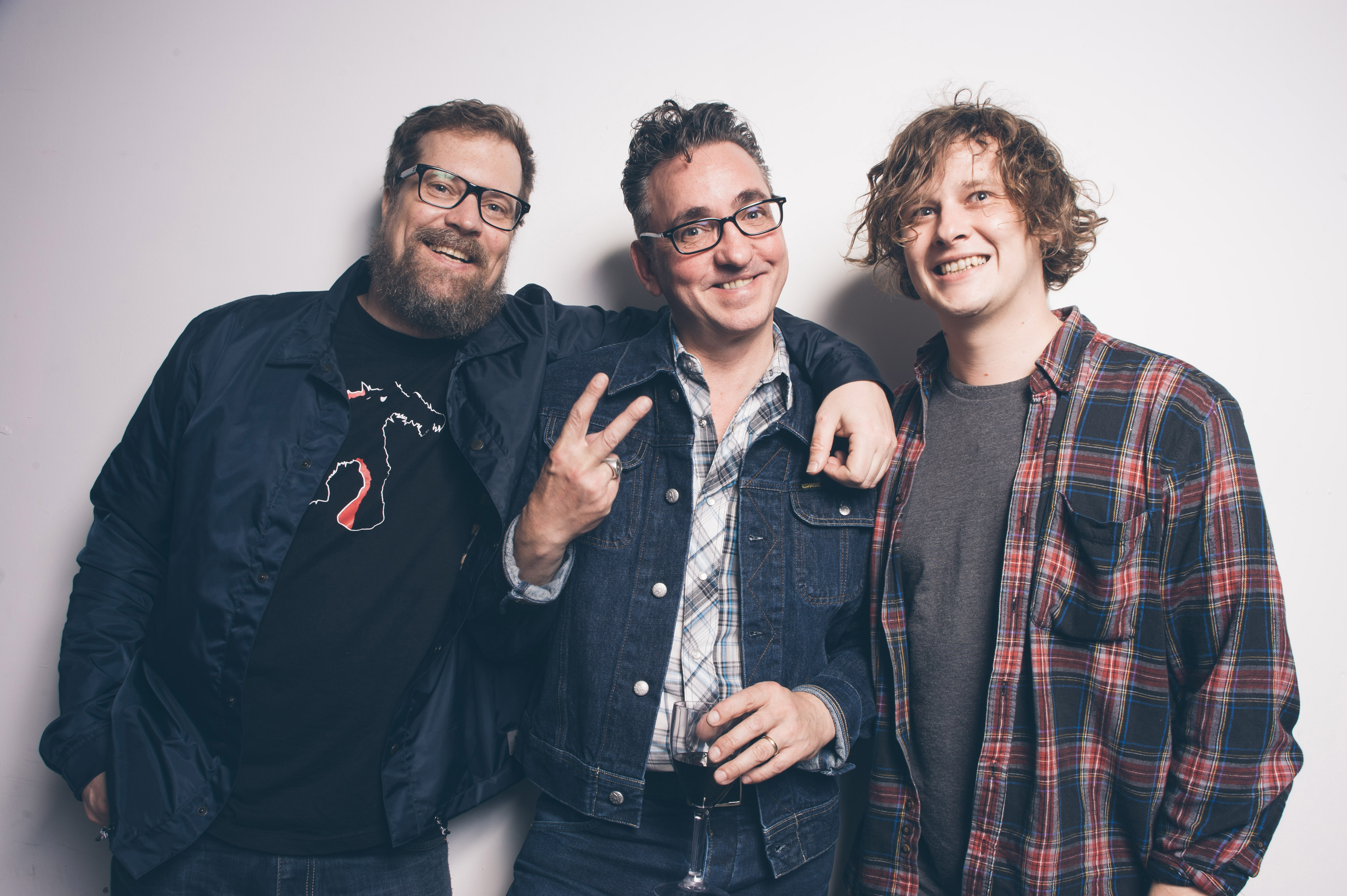 Three days after the circus leaves Paris, Hawley and Doillon will be joined by Manic Street Preacher’s James Dean Bradfield, as the event comes home to Sheffield for the second annual 3 Ring Circus in association with Sensoria Festival.

Each artist acts as the opening act in a venue, plays a 40 minutes stripped down/acoustic set then jumps into a waiting car outside which will speed them to the next venue – so they rotate with each other. And the same again to the last venue, so each artist becomes the opener, middle act and headline – and they say democracy doesn’t work.

For the uninitiated, Sheffield’s Richard Hawley has become synonymous with the city through his eight solo albums. The last of which, Hollow Meadows, was released in 2016. As well as his own solo career he has worked with a myriad of artists such as Tom Jones, Shirley Bassey, Nancy Sinatra and Duane Eddy. One of the most versatile artists of a generation, he has also worked and recorded with bands such as Arctic Monkeys, Elbow, Manic Street Preachers and Pulp.

James Dean Bradfield is of course best known as the lead singer of Manic Street Preachers who have become one of the legendary British bands of the last 30 years. His first solo record was  2006’s  The Great Western. 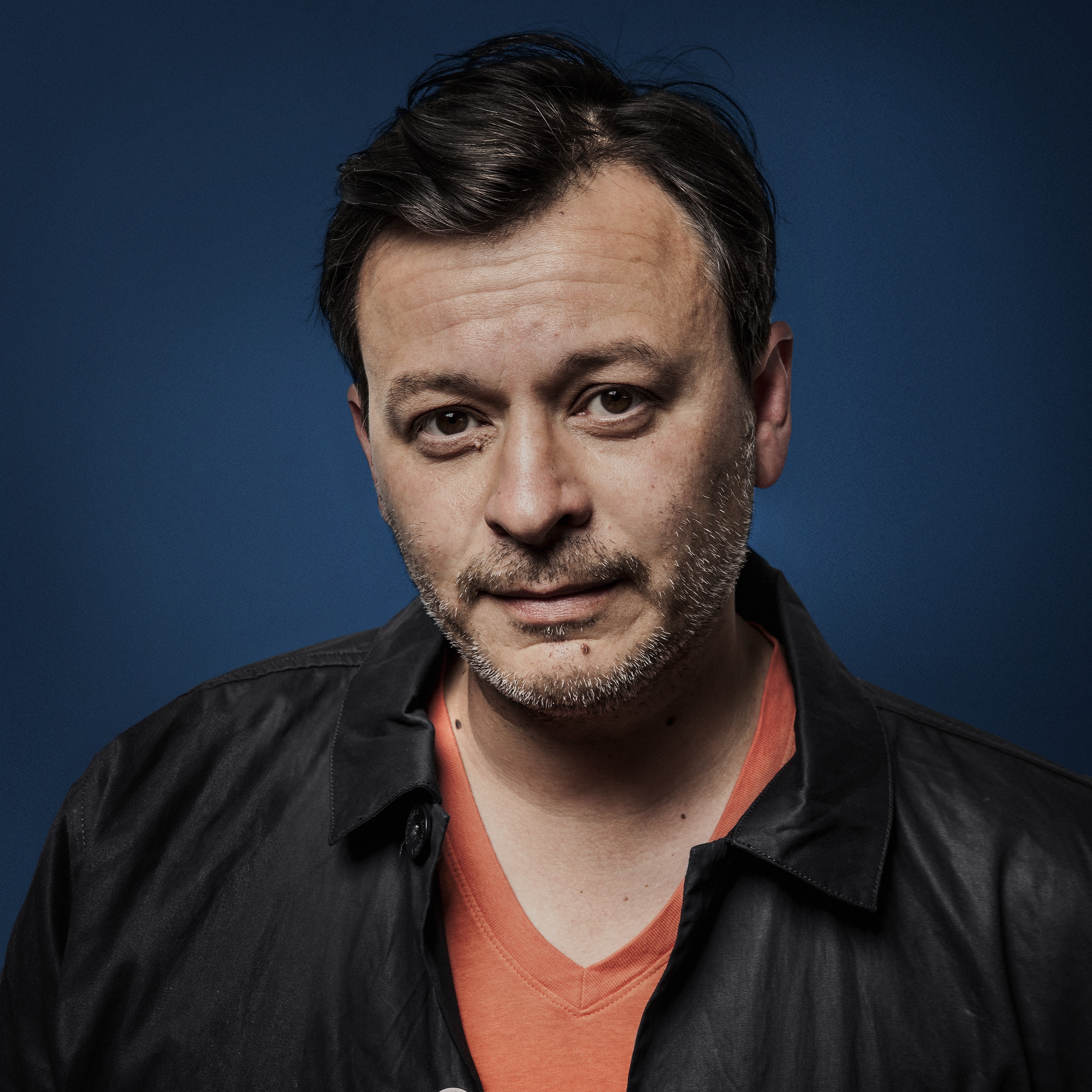 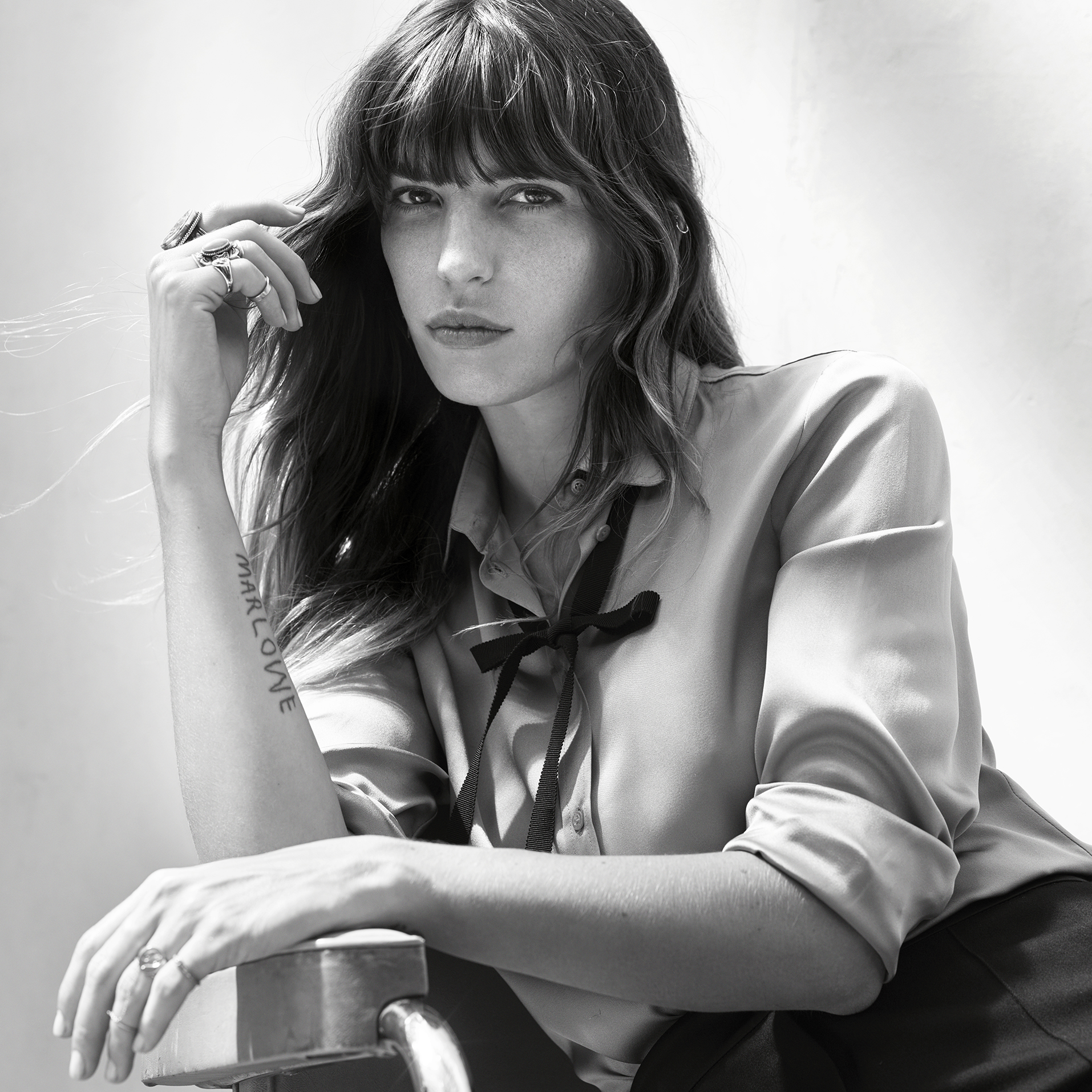 It’s difficult to talk about singer Lou Doillon without acknowledging her family connections in the French movie and music industry. Daughter of film director Jacques Doillon and actress Jane Birkin and half-sister of Charlotte Gainsbourg, her first album Places won her Best Female Artist at Victoires De La Musique (the French Brits) in 2013 and her 2nd album Lay Low was released in 2015 and went Gold soon after.

So the audience sits still, maybe has another pint, has a chat in between whilst the artists break all speed restrictions in order to get to the next show. The only catch is that no one knows in what order the artists will appear at which venue. So it’s pot luck. But the important thing is that you get to see: Richard Hawley, James Dean Bradfield and Lou Doillon all on the same bill in the most intimate surroundings.

Ahead of this year’s events, we chatted to Richard Hawley to get a view of the performers but first with manager Graham Wrench who dreamt it all up in the first place as he  explained the spark: “I was fed up of the way I feel when I go to a gig as an audience member. It can be like going to the cinema – everything is really safe and the whole experience isn’t like when I was a lad! My favourite gig on the planet was the Manchester Roadhouse where it felt like the roof was going to fall on your head as you watched the band. I just wanted to make things more interesting and exciting for the audience and like we’re interested in their experience and this is what we came up with.”

It’s the whole idea of the logistics with “the artists rushing from venue to venue ram packed with adrenaline so what Richard said to me, instead of sitting round in a dressing room for hours, you’re almost running down the street and they go onstage completely wired. Last year John Grant was brilliant and launched himself into the whole thing. He was recording an album and wasn’t able to commit to Paris this year, but he rang up and said he enjoyed it so much he’d break from the album and go for it. The artists enjoy it that much.”

“It takes away the safety net that’s been built up and “it’s better for the artists and better for the audience with the energy and the excitement, rather than the usual routine and format for a gig. The thing with Richard having worked with him for so many years, he’s always up for trying to do something different live rather than going again to the nearest O2 Academy.”

The Upper Chapel, as Richard mentions later, was one place he’d wanted to play for ages, that was targeted as one venue, “so we just had to find two more that were a maximum ten minutes’ drive and there are loads of venues in and around Sheffield that you can go and see bands in.” There’s also some excitement about having Lou Doillon on the Paris bill. The daughter of Jane Birkin (“she’s very cool and for me she’s like Patty Smith with the look and the sound”) hasn’t played in Paris for a few years and we also asked her to come to Sheffield as she doesn’t do many shows over here and it’s also good to bring her to Sheffield where she wouldn’t naturally be able to play.”

“I looked at loads of place in Paris including churches but we’ve found an old strip club that’s small and intimate with loads of history in it and the first place that Blur and Oasis played in Paris. There’s also a small cinema space and also a brand new venue called the FG Barbara. I’ve been looking at avoiding main roads and using backstreets to get around! We’ve done the run already! We’re doing Paris again next year but we’re doing the same thing in New York and artists lined up, and possibly Belgium as we all like playing in Brussels for some reason.”

Sheffield will always be the constant but Graham was toying with the idea that if James Dean Bradfield enjoys it, there might be an away leg where they all head off to Cardiff. Plus there’s the fact that Richard later commented on that the artists don’t get to see each other’s set with dashing round. The thought occurred that maybe after the final gig, everyone could head down to one venue although as Graham said “I want to make sure everyone gets the same experience or have one audience get something another audience didn’t.” However, watch this space… 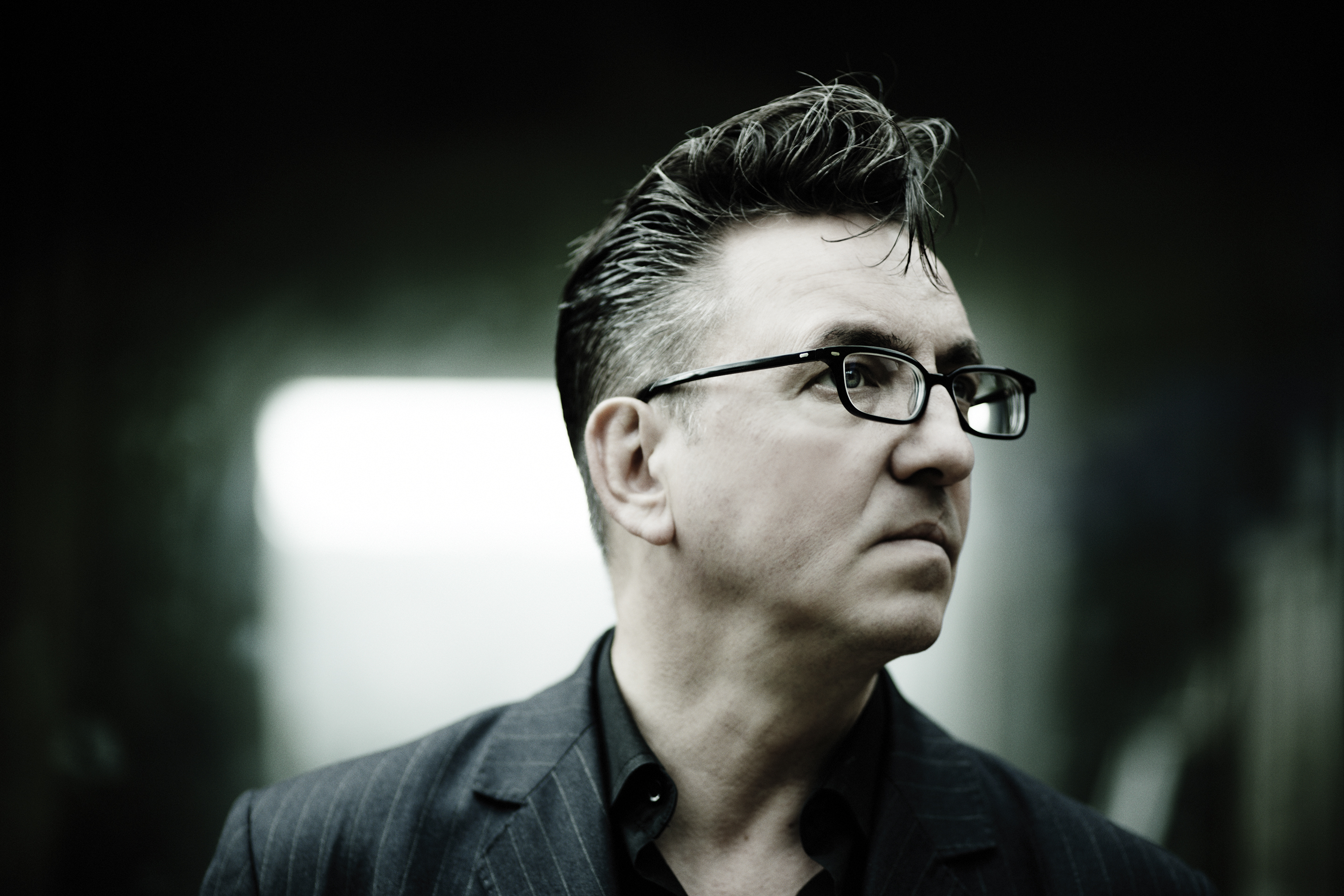 Aside from a wandering chat about various topics including an appearance at the Ramsbottom Festival (“it were f**kin’ freezin’”) Richard was keen to explain why racing round Sheffield (and Paris) from a musicians point of view was something that grabbed his enthusiasm.

“It was meant to be a one off that emerged from my Grandad’s phrase. And also at the end of touring the last record we’d got to the stage with two tour buses and an articulated truck which was brilliant, but me being me there’s a part of me that’s the ‘post punk rockabilly’, an indie kid at heart. I did a little acoustic show for Mark Kermode at a film festival in the Shetlands with the upshot that it was really enjoyable as it was the antithesis to the back of ‘Ummagumma’. The fact that it was stripped back to the basics of where I started as a kid and playing folk clubs with my dad.”

Loads of people do acoustic gigs all the time, but he explained once the flame had been ignited, “I got Graham to get me some more gigs which was totally the opposite of our relationship, me ringing him, so we did some gigs that I hadn’t done since the beginning. When he went through the three gigs in one night idea what I immediately liked about it was that you could get an artist of the stature of James Dean Bradfield or whoever to engage with something that’s a musical and political (with a small ‘p’) leveller, where you act as opening act, middle and then final act in a musical socialism that I thought was f**king mint!”

“I also like the punk aspect – the fact that it might not quite work, the unpredictability – that’s always the thing that’s kept me interested. The circuit for ever and ever doesn’t interest me, if you get bored you become boring and folks who are interested in what you do will go to something else. I’m an old scrote and I don’t want to do what’s predictable so the minute Graham came up with that I was interested.”

But can an idea that works so well have any longevity? “The first one was so great that he then suggested doing it again but although the idea that lightning doesn’t strike twice, the suggestion about taking it to Paris – one of the most chaotic cities in the world – kept me interested. The proper mad panic, like watching a swan with all the chaos under the water. The blind panic aspect was the thing that attracted me and also the sadistic side of me at seeing my fellow artists run round like blue arsed flies amuses me.” Having said that, he did confess that the first three ring circus was mayhem. “We felt like three musketeers, me Shez and our tech piling into a van and flying to the next gig on a wing and a prayer, but then you get five minutes literally to find your space and be calm and go and do your stuff. I like that – boiling down to very basic things like the fifties tours with loads of artists on the bus travelling hundreds of miles to play one song in a revue. That’s what appeals, you’re not hiding but with a randomness also for the audience. Complicated in a way but not complicated at all!”

Of the three venues, the Upper Chapel was a place where Thomas Jessop was originally part of the religious community one that was on the ‘to do’ list “I passed it for years and I was curious about and I’d never seen inside. Graham managed to wangle that but that’s a fantastic space to play. It’s the oldest of the three venues and very much a part of Sheffield history.” What he described as “A proper vibey gig that caters for all ages! But for Paris, there’s time to soundcheck for the first one and then wing it as I’ve also got this thing to do for TV with Antoine de Caunes who’s a fan.”

The sprawling chat went on to cover the recent gigs at The Devil’s Arse in Castleton (which incidentally should be coming out as a live album), the audience in Belgium where most of the audience were holding up their ipads to film the gig (“like the pictures you see of audiences with the glasses on looking at the old 3D films”), football and the Steeltown derby that didn’t end well for Richard’s beloved Wednesday, but ultimately Ricard’s  pleasure and honour to still be able to play in front of people who still turn up. Humble words from a genuine fella and splendid raconteur.