Home Blogs The Three Johns: Brudenell Social Club, Leeds – the return of The... 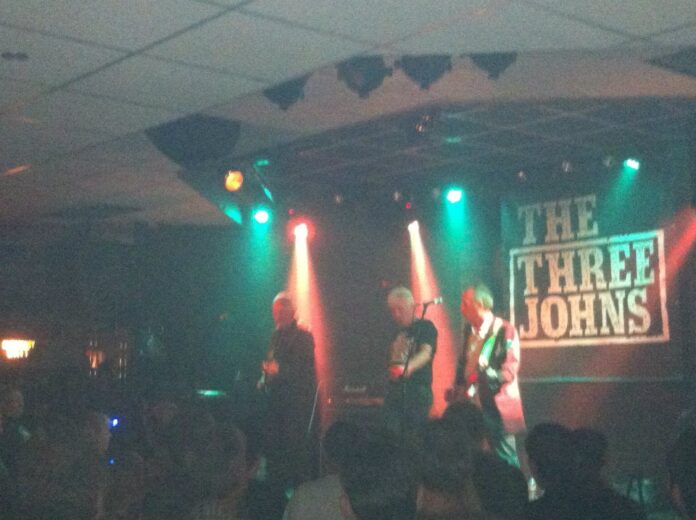 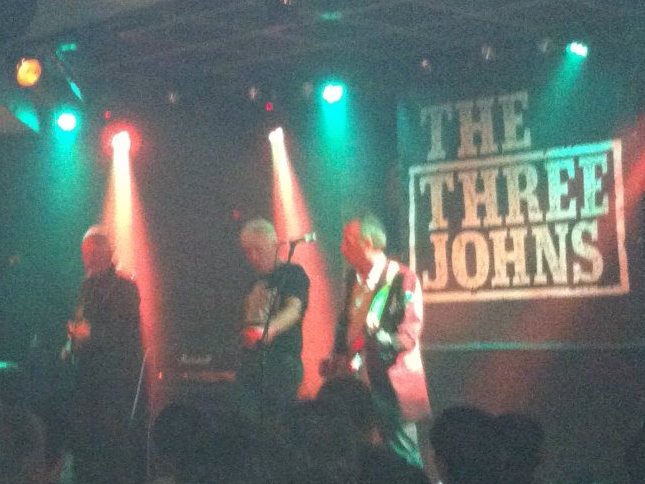 Leeds 80s post-punk heroes The Three Johns (Jon Langford (co-founder of The Mekons), vocalist John Hyatt and bassist Phillip “John” Brennan) made a triumphant return in Leeds last Wednesday. Louder Than War’s Sean Diamond was there to see it.

It’s happened again. Like a ‘Coal Not Dole’ badge wearing alien jumping from the rotting corpse of unprincipled gangster capitalism, Leeds’s best known boy band The Three Johns are back.  They are here to trouble the charts and melt the hearts of the young in their own, inimitable fashion. To make up for lost time, with 2014’s planned tour cancelled thanks to frontman John Hyatt’s prolonged battle with throat cancer, The Three Johns are back armed with a long overdue merchandise stall; T-shirts, DVDs and box sets galore! Oh, and a hometown gig to mark the occasion. Be There or Do The Square Thing.

First up is Martin Bramah, a founding member of The Fall (another well known boy band) and vocalist in cult heroes The Blue Orchids. Armed only with an electric guitar and a heart full of sorrow, Mr Bramah proves a truly intoxicating prelude to the rock ‘n’ roll insanity which surely lies ahead; a quiet riot of love, regret, uncertainty and fear. Not always easy to digest but all the better for it, the music of Martin Bramah is guaranteed to linger in the heart and soul long after last orders.

The lights go out, smoke silhouettes the impressive giant band logo etched on the wall behind the stage, and the unmistakable spoken word intro to the Alice Cooper jamming with Iggy and Elvis Costello anthem AWOL fills the venue. The world of the workers is wild, the world of the Three Johns even more so!  Never has this gloriously unrefined, breathtakingly melodic, awe inspiringly spiky hymn of the feral underclass sounded so alive, so fierce, so tight!  Never has Do Not Cross The Line sounded so funky!  Never has the yuppie-baiting Brainbox (He’s A Brainbox) sounded so prescient; Hyatt’s line “How many do we pop on our way to the top” taking on new heights, a chilling echo of the ruthlessly consumerist, opportunistic culture of the Thatcher/Reagan years, a culture that many different sectors of society (workplaces, institutions, members of our communities) have yet to recover from. Throat cancer can be a pain, but it doesn’t appear to have had any lasting effect on John Hyatt’s vocal chords if this is anything to go by.

Of course, in lesser hands too much politicking can fall into the realms of self parody. As well as having the tunes to back up the statements, The Three Johns have always injected a healthy sense of humour into their live shows (and on their records), their gloriously surreal onstage banter is the stuff of legend!

There are some hilarious anecdotes from lead guitarist Jon Langford tonight, including the denial of being in a certain place at a certain time “I was in the army, stationed in Korea selling cocaine to the natives” and the hazy recollections of a German tour “I remember urinating on the Berlin Wall at six in the morning.”

After a glorious triple whammy of an encore, comprised of the thrilling punk barnstormer English White Boy Engineer, the proto baggy psych-pop groove of Lucy In The Rain, and a Men Like Monkeys which manages to be both apocalyptic AND hilarious at the same time (no mean feat) we are left with one final parting shot; some food for thought courtesy of Bassman Philip ‘John’ Brennan (Brenny to those in the know). “Thank you for coming. Go back to your constituencies. Don’t watch the news.” You’d be better off buying the forthcoming Three Johns box set, Volume, instead, it’s of greater cultural importance and is far more beneficial to the education of your children.

The ‘Volume’ Box Set is released on 14th August. It is available to pre-order at Jumbo Records and Amazon.

It will also be available to buy from Louder Than War’s shop, as will the t-shirts and DVDs of the band’s Brudenell show of 2013.