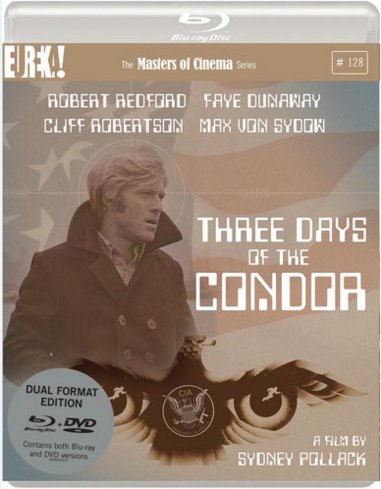 Jamie Havlin reviews one of the classic American conspiracy movies of the 1970s.

In the wake of the Watergate national scandal, America was certainly ripe for the conspiracy thriller; think The Conversation, All the President’s Men and Blow Out. Three Days of the Condor was originally slated to star Warren Beatty, who instead chose to make a similar project, The Parallax View, Robert Redford replacing him to work once more with director Sydney Pollack, who he’d first met when both were young actors on the set of the 1962 movie War Hunt.

Fresh from three straight box office hits – The Sting, The Way We Were (directed by Pollack) and The Great Gatsby – Redford here plays Joe Turner, employed as a reader/researcher in a Manhattan building that masquerades as the American Literary Historical Society but which is really an outpost of the CIA. His job is so secret that he can’t even tell people he trusts about it, even though he is very low level in this world, his daily task being to search for patterns, codes and hidden meanings in books, newspapers and magazines like the one he has just filed a report on that has been translated into Arabic but not French; Dutch and Spanish but not Russian.

So rather than some supercool spy, Turner is pretty much a regular guy. Still, he does have a rather cool codename: Condor.

Turner is also the office maverick, he repeatedly comes into work late on his bike and when he is sent by his co-workers to collect their lunches from a local deli he leaves – much to the annoyance of the security guard – by the unofficial rear exit.

This last part is a very important detail.

While he is away fetching the food, an event that will have a seismic impact on his life takes place – a group of assasins led by a man we later discover is called Joubert (Max von Sydow) enter the office and kill every one of Turner’s co-workers including his girlfriend Janice Chon (Tina Chen). If he had exited through the front door, the killers would presumably have waited for him and gunned him down too on his return.

The CIA are called and Turner is instructed to meet his Head of Department, who will bring him in from the cold. This, however, is a trap and forces Turner to go on the lam, never knowing for the rest of the film who he can trust.

Needing a place to hideaway, he kidnaps a passer-by, Kathy Hale (Faye Dunaway), who doesn’t believe his account of events fully, especially after a later news report contradicts much of what he has told her.

If you have watched the Steven Soderbergh movie Out of Sight, you might remember a scene where the George Clooney and Jennifer Lopez characters discuss the Turner/Hale relationship, Lopez complaining: ‘I never thought it made sense though, you know, the way they got together so quick, I mean romantically.’

She has a good point. The subplot involving a romance between Turner and Hale does look to have been shoehorned in purely to please the paying audience, although Pollack has made more than his fair share of love stories.

In the director’s defence, people can act dramatically out of character after suffering a post traumatic shock but when the audience needs to root for someone, it makes little sense that on the same day that your girlfriend has been shot dead that you end up wanting to sleep with anybody else, even if she does possess the chiseled cheekbones and all round good looks of Dunaway.

The sex between the pair, though, is handled wonderfully, intercutting between shots of them together and a series of her bleakly beautiful photos of empty streets and locations – which Turner admired, helping to establish a bond between them and which convey her essential loneliness.

This is a fascinating film that keeps you gripped throughout and, unlike most thrillers produced by Hollywood today, Three Days of the Condor doesn’t over-rely on technology and deafening sound effects – here a rumbling heater can make more of an impact.

Its theme is still relevant today even if the Dave Grusin supplied jazz fusion score and very seventies futuristic graphics haven’t dated too well. Three Days of the Condor also has one of the finest endings of any film from the era, though, of course, I won’t give that away.

Extras include an exclusive new video interview with film historian Sheldon Hall, a documentary charting the career of Sydney Pollack and a 32 page booklet featuring an extensive interview with Pollack, and archival images.