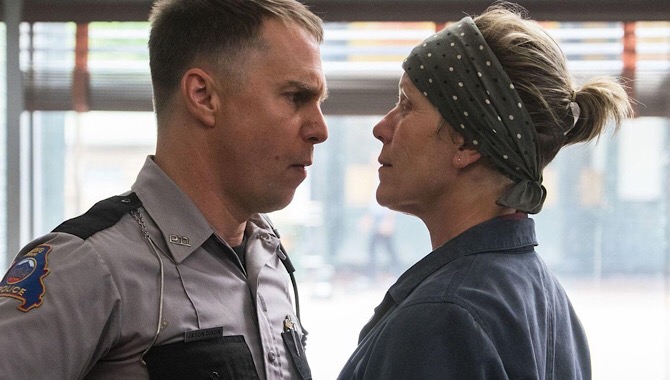 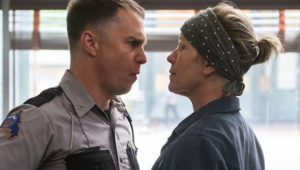 I write this in Tony Wilson Place beneath ice cold, barely blue skies and a fluorescent glaze on the towers that surround me. As bright as the late winter sky is, there is little illumination. The square is a tangle of shadows, greys and dead-eyed colours beneath the plinth of Engels’ recently erected statue. He presides over Pizza Express, a bike rack and the artistic extravaganza zone that is Manchester’s Home. Over a coffee, I ask him what he thinks. He has yet to reply.

During his silence, I’m thinking about stories old and new. There is nothing new in Three Billboards. But this, at least, is now. The film feels, somehow, like it could not have been made at any other time yet Martin McDonagh, the writer and director of Three Billboards, says he wrote the screenplay eight years ago. There are no new stories, just the old ones, the ones that we realise and rediscover, across millennia and in every conceivable language, time and time again: the ones that make us. So who’s really writing these stories? Is the writer a prophet or does nothing really change? Is the writer the beetle, burrowing in the skirting board, scooping an unconsciously perfect sized hole in which to crawl, gestate and give birth – all of which was inconceivable to the tiny creature in the dust and the dark?

There are massive tectonic forces at work beneath the surface of the narrative. They grind and splinter as knuckles break and patience wears thin, as day after endless day there is no justice, there is no relief, there is no resolution, there is only intensity, a boiling primal intensity. Three Billboards bearing slogans in response to the rape and murder of a young woman, the billboards all out on a highway which no-one ever uses anymore. Piffle. A slight yet wrong-shaped stone slumped into a lake, to disappear forever below the surface, the ripples only momentary, surely? But no, every subsequent event in the film is the widening of one such ripple, a vibration on previously placid surface tension, the crest of a wave. Through these vibrations, the characters are formed and deformed, sculpted like the claw handed branches of weathered moorland trees. Rifts open up beneath their very feet and Mildred (McDormand) and Dixon (Rockwell) step back and forth across from one side to the other, endlessly overlapping in their increasingly crazed dance. In this late winter light, they flicker, blink and one becomes the other. They traverse the territory with maddening ease, exchanging roles as though they are just place holding vessels, violently interchangeable.

But this terrain is not the lava fields of Iceland, it is of course, the USA, the UK, Austria, Hungary etc etc. A meditation on natural states, choose your team: Rousseau or Hobbes? The interesting thing about both Mildred and Dixon is that although they become rivals, spinning towards poles of diametric opposition for much of the film, both characters embody that Hobbesian assertion, that in the absence of an effective State, life is short, nasty and brutish. However, it is suggested that in both cases, the characters’ perspectives are not simply their natural, unrefined dispositions but the sum of their formative experiences. For Mildred it is, obviously, the loss of her daughter and the judicial vacuum that followed, whereas for Dixon, we are offered glimpses of his dysfunctional ale-bound home life with his mother.

Three Billboards Outside Ebbing, Missouri is a film about people who don’t seem to matter, in their lives and in their deaths. It’s a film that stares you in the face and demands an answer as to how you can be really surprised by a Trump victory, by Brexit and all the rest. This is such a timely film because of what the viewer brings to it and the fact that the viewer is exactly that which could not have been made at any other time. I wonder what posterity will make of this film? Outside, in the square, the light has dimmed and Engels’ shadow has grown long.

Three Billboards Outside Ebbing, Missouri is on general release now.

Watch the trailer for the film here: