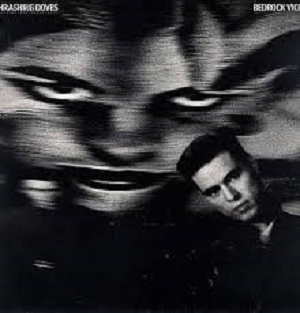 A re-release of the London based quartet Thashing Doves’ 1986 album. Louder Than War’s Paul Scott-Bates reviews.

Like it or not, there can be little argument that the early 80s spawned an unprecedented number of what are now termed ‘classic’ singles. Take a look at the charts from 1980 to 1984 and it will guarantee at least one such track on every week of the Top 40. It was in the late 80s that this changed, the amount of lesser known but critically acclaimed acts who failed to whet the appetites of the UK public were many – The Bible and The Big Dish were prime examples as were Thrashing Doves.

Thrashing Doves (in)famously signed for A&M after a flurry of activity involving many of the majors to obtain their signatures. Not unheard of, but the group hadn’t even recorded a demo at that stage and the interest was purely based on their ever growing reputation as a live band. Recording the promised two albums for the label of which Bedrock Vice was the first, they had just one sniff of chart success when third single Beautiful Imbalance reached the dizzy heights of number 50. The single brought about the phrase ‘the curse of the Thrashing Doves’ after a certain Margaret Thatcher expressed a liking for the song on Saturday Superstore and has been used ever since to indicate a turn in fortunes for any band endorsed by politicians.

Containing five singles, the bands debut album somehow managed to attract the talents of the eras most in demand producers and remixers – Chris Thomas, Bruce Lampcov, Jimmy Iovine and Bob Clearmountain – who between them had the likes of The Sex Pistols, Bruce Springsteen, Tears For Fears and Simple Minds on their CVs.

So what of Bedrock Vice? The stark truth is that it was a stunning album. Coarse but clinical drums, sumptuous jangly guitars and unforgettable keyboard hooks with the semi-punk vocals of Ken Foreman, coupled with impressive quiffs and highlighted cheekbones were a perfect combination. Album opener, Beautiful Imbalance despite its ‘fan’ provides one of the finest alternative singles of the 80s.

Thrashing Doves weren’t airy-fairy lyrically either. Listen to Matchstick Flotilla and its veiled comments on immigration or Rochdale House with references to drug abuse. The thing with The Doves (as they were named for their USA only album Affinity) is that they were probably ahead of their time. Like On-U Sound, they turned regular sounds on their heads and pumped out something that absconded fans of the early 80s charts craved.

Despite supporting the likes of the Ramones, Big Audio Dynamite and Squeeze the UK’s loss was the USA’s gain as the band embarked on a headline tour as Je$u$ On The Payroll entered the Top 20 of the Billboard Dance Chart. The remaining singles The Grinding Stone and Biba’s Basement (ironically referencing the Iron Lady) provided further evidence of the bands prowess.

Admittedly, the album isn’t all killer, as Rochdale House demonstrates, but it’s far from filler too. Northern Civil War Party was another track screaming for single release. Giving way to Balearic beats and loops, Bedrock Vice is a largely undiscovered gem. Has it aged well? Perhaps, but that’s mainly down to the fact that the 80s weren’t ready for it.

The bonus tracks include remixes and stunning b-sides (check out Self Infliction Crew) together with a superb live version of The Rolling Stones’ Sympathy for the Devil making the cd an essential addition to any music collection.