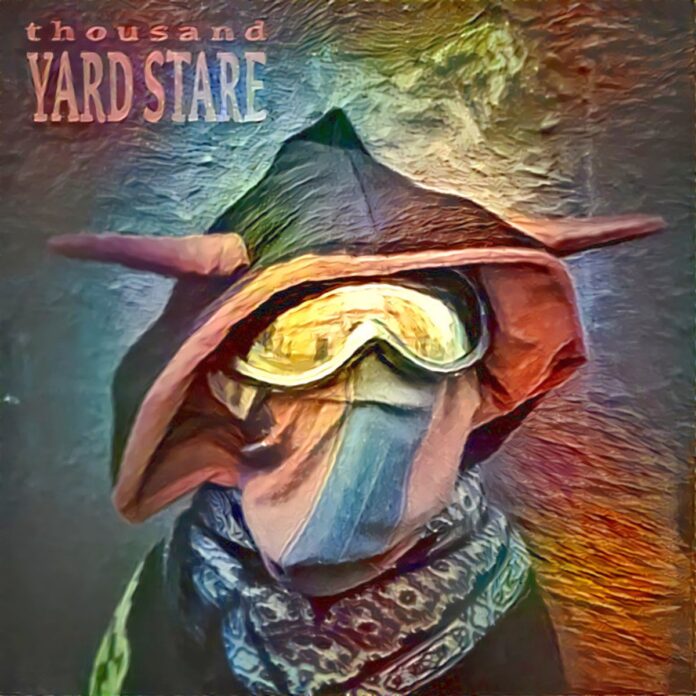 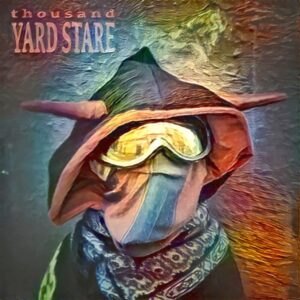 There’s plenty of 90s bands reformed over the years – Thousand Yard Stare were one of the most unlikely, but they’re back, after a live record and two EPs – with their new album The Panglossian Momentum that’s a fine addition to their underappreciated history.

Thousand Yard Stare were the right band at the wrong time in the wrong place. Lumped in with shoegaze because of timing, with Ride because they were vaguely close, their singles were lauded by parts of the music press in 1991-2 but they were never truly championed and given the exposure they deserved.

Despite a slot on James’ big Autumn 1991 tour, by the time their impressive debut album Hands On came along, its quintessential Britishness was seen as out of place, although Blur were about to start trading on just that a year later and then Suede and others made British music fashionable again as grunge’s flame flickered and burned out. By the time their second album came out they were close to calling time, and despite the strength of Mappamundi, it was met by most with the enthusiasm of a Monday morning alarm call when it’s a Bank Holiday.

Apart from dark corners of the internet that retained a love of under-the-radar nineties indie there wasn’t a massive clamour for a return, but their surprise reappearance in 2015 with a sold out Borderline show in London and 2016’s Live At Electric Studios reassessment of their catalogue with a few new tracks thrown in whet those appetites and saw a nationwide tour ensue. This was followed by a 2017 double EP (to all intents and purposes an album) entitled Deep Dreaming / Star Grazing that tugged at the same heartstrings their early material had but which showed that Thousand Yard Stare still had new ideas aplenty and weren’t just doing this for the money. Mainly, because there wasn’t really any to be had. Like all the best reunions, this was about making music and sharing the joy of that music in a room full of like-minded souls.

Fast forward three years and we have The Panglossian Momentum which, like Deep Dreaming / Star Grazing, is eight tracks long but this time labelled as an album. It recalls much of what made people love them and still hold a candle for them, the lead single could have been lifted from Hands On, or more accurately one of those majestic EPs that bands seemed to reserve much of their best work for in those long lost days. Yet, for all the references to tailenders and boxers clinging to the ropes, three minutes in the guitar solo throws a curveball that says they’re not just here to recast the stones that they’ve picked up when they reformed. We’re already aware of this from opening track Cresta (Seachange) that feels like an exploration of new ideas, touchpoints from their favourite bands in a dreamy opening where Stephen’s vocals feels like it’s emerging from a fog-laden distance to rescue us.

Schism Algorithm feels and sounds familiar, but hard to place. Stephen’s voice is unmistakeable to those who know this band from the best part of three decades ago – and their ability to pick unusual but effective rhythming – “I concrete this, concrete this in your hearts and minds, if I repeat this, repeat this, repeat these lines” – is still very much in evidence, but the song has a looser, more languid feel to it than the tight taut rhythms of the past, like the kid who’s had years of growing out of tight skinny jeans into something more comfortable but still managing to pull off the look effortlessly.

Spandrels clocks in at over seven minutes, although once you’re immersed in it you lose track of time, and is perfectly laid-back, warm guitars, soft drums and Stephen asking “won’t you please let me know how this ending unfolds?” to try and unravel the uncertainty that’s swimming around the song.

Sleepsound is a glorious three-minute romp that will delight the old-school Weatherwatchers (the fan-group name from one of their early singles) and for newcomers it sounds like that lost track on the nineties indie compilation you picked up that has you running to Discogs to find everything and anything they’ve done and wondering which hole you had your head buried in at the time.

Precious Pressures once again feels more widescreen, like a band still exploring the boundaries of their sound even after all these years. Guitars take a back seat to a keyboard line given them the room to broaden their musical horizons without distilling the inherent warmth in what they do. As it approaches six minutes you’re involved in the song and the instrumental outro (save for delicious harmonies) has surrounded you and captured and secured your attention.

The album’s final two tracks – Sense The Panacea and A Thousand Yards (A Panglossian Momentum) – are Thousand Yard Stare at their most adventurous. The former is much more melodic and with experimental sounds entwined in there whilst the close to nine minutes of the latter take the listener on a journey. It takes you through numerous states of minds and thoughts in a way that they’ve hinted at on previous releases (Wideshire, Comeuppance) but haven’t quite achieved with the same level of success – the benefit of older and wiser heads.

The Panglossian Momentum is a genuine joy to listen to, a record that’s been made out of love and the need to indulge themselves in the creative process with long-lost brothers. The tension that was evident in their second record Mappamundi has fully dissipated here and that relaxation of the muscles, the flowing of the creative juices and reconnecting of the spirit of the earlier years of the band are very much visible above the surface of these eight songs.

The album is out now and can be ordered on vinyl, CD and digital from their shop.