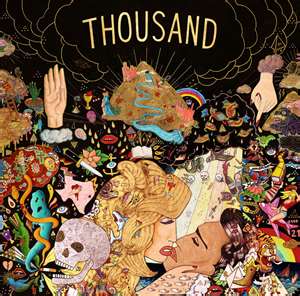 Thousand is the project of young Frenchman (although he spent most of his formative years in Texas)  Stephane Milochevitch. This is his second album proper but he has apparently been bunging out self-played and produced mixtapes since his pre-teen years. His debut album, Flying Pyramid, sat under the radar for the most part but received quite considerable critical acclaim by the music press and fellow musicians. Josh T. Pearson covered one of the tracks from this new release (Song Of Abdication) on his recent The Singer To The Crowd EP.

This is one very assured record; it has a bitter-sweet feel to much of the rather clever wordplay. Other than the above-mentioned Jeffrey Lewis, there is a hint of Luke Haines’ caustic lyricism beneath the sun-dappled psych vibe of the playing. Calling this folk or nu-folk or whatever other old bollocks gets attached to singer/songwriter stuff these days is doing it a disservice; this is sharp, modern and most definitely facial-hair free. If modern pop music wasn’t generated from some Orwellian/Cowell computer programme it might actually sound a bit like “Thousand”; clever, articulate, existentially catchy and breezy with just the right amount of pretty poison chucked in.

Joining Milochevitch on the self-titled album is Olivier Marguerit on bass, keys and vocals, Raphaël Séguinieron drums and Emma Broughton and Maud Nadal on vocals.

“The Break Of The Day” is a gorgeous, swooning piece of pop class and the aforementioned Pyramid Song is an obtuse earworm that’ll brighten your day exponentially.

Listen to the songs from “Thousand” here on Bandcamp.