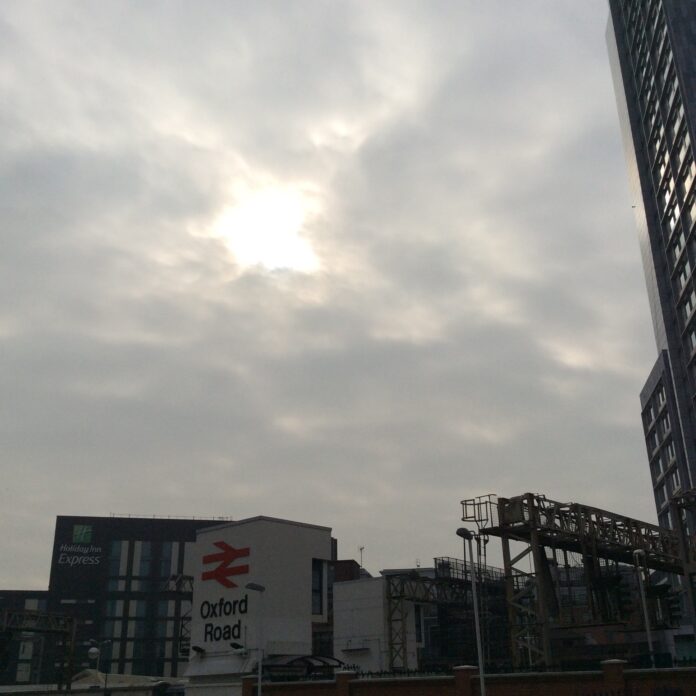 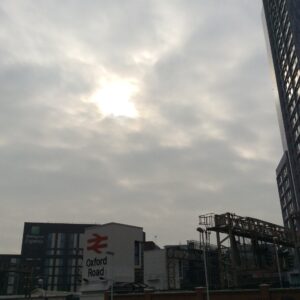 Even behind the perma fuzz of the endless Mancunian grey clouds you could feel it even if you could only see it in fleeting and flirting solar moments..

The threat of the total eclipse of the eclipse by the blanket of murk that cloaks Manchester like a damp sleeping bag couldn’t stop nature at its grandest. The city’s grey skies couldn’t resist letting you get several peeps of the stunning eclipse that was emotionally, spiritually and physically powerful and affecting.

When you went outside your flat and into the hanging stale air you could feel a strange brew, a strange atmosphere. The birds had fallen near silent confused by the new dawn and there was a muggy and strange atmosphere like a spectral droning in some kind of Indian Holy town- it reminded my of the last eclipse I witnessed in the Indian city of Varanasi, an evening when time seemed to stop for ever in a city full of time and whispers. The holy men danced crazy skeleton dances and jumped into the gunk filled Ganges as they lit huge bonfires and played the Ramalaya on droning instruments. It was New Year’s Eve and there was a strange and powerful mystical electricity in the air as the fog swirled off the holy river and the madness of the beyond filled the smoke and prayer laden night air.

Of course Manchester never does this kind of exotic but it had it own holy moment this morning even in the front garden of my block flats. There I could feel time stand still whilst peering through the clouds at the crescent shape of the sun and the huge bad tempered moon barging in front of it and hung in the morning sky like a reminder of the sheer ancient power of these things.

It was a profoundly and stunningly moment – not like a so called religious experience but far bigger than that. The weird silence and the power of nature and the eternal power of the hidden sun king hung in the crisp, yet muggy air. An air still filled with the pollution cloud that sat over Europe which added an extra glow to the holy glow.

The timelessness and powerful energy of it all was quite oddly over whelming. In the city centre people were trying to grab the money shot on their mobile phones – the perfect modern reaction to the ancient. Meanwhile most other people were disinterested and even bemused by this fascination with the power of nature, some even laughing at those who had awoken from the celeb strewn stream of piffling modern consciousness to peer through gimlet eyes at a real star.

For a strange and brief moment emotions welled up and that odd timelessness you get when the powerful forces are in action happened. It was one of those primal moments that locks you back into the forever. Back to moments of druid madness and the sheer pinprick tinyness of human existence.

The eclipse was so much more than you could expect.

Even for a brief half an hour before normal service was resumed something so ancient and so powerful made you stop in your tracks. As I raced around Manchester city centre looking for the grinning sun I could feel the madness and confusion of the ancient henges as they grappled with this bizarre moment and you peered into the sky and that moment when everything stood still hung in the gunk filed morning air like meditative magic.

As normal life resumed and the world awoke for the second time in two hours the birds started howling again and the sun slipped behind the clouds and away from the moon.

The moment was gone for another lifetime.