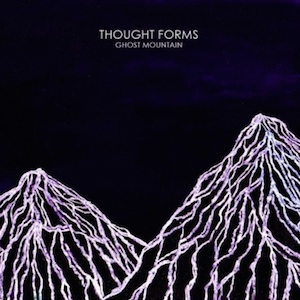 This Invada lot know what they’re doing aye! After releasing some of the finest albums of last year with the BEAK>, DROKK, and the Drive OST, they’ve gone and released Ghost Mountains by Thought Forms and have instantly got a stone cold classic on their hands.

Bristol band Thought Forms (Charlie Romijn (guitars/vocals), Deej Dhariwal (guitars/vocals), and Guy Metcalfe (drums) have, on their sophomore effort, made an album that will by the end of the year be in a lot of music critics ‘end-of-year’ polls (and if it’s not I’ll eat my hat…. Literally)

Ghost Mountain is the sound of a band brimming with confidence, ideas, and sheer talent putting a lot of other guitar based trios (I’m looking at you Joy Formidable) in the shade.

Being on Invada, getting support from Geoff Barrow, and being produced by Jim Barr, might lead you to have a preconceived notion of what this album will sound like. Well guess what? You’ll be wrong! The only nod to what people once lazily coined the Bristol sound is the sheer amount of different musical genres that have been thrown in the pot to create a magical new whole.

The album starts with the track ‘Landing’ (although it more resembles take-off) which comes clattering in on a snare roll before the guitars hit and a scream breaks the years. This is sludge metal with added pop. Like a Bleach-era Nirvana with added guts, this is as strong an opener to an album you are likely to hear which makes the impact of second track Sans Soleil even more profound.

Coming on like Goo-era Sonic Youth, this track is pure garage fuzz punk with great dual (and sometimes dueling) vocals that can leave your head spinning whilst still retaining that pop edge to keep your head from spinning. But this is just a tease because up next we have…….

‘Burn Me Clean’. A twelve-odd minute tour-de-force and the centerpiece of this album.

Starting with drone and low feedback, the solo chant like vocal that kicks things off is more chant/worship than rock performance. It invokes the feeling that True Thoughts are summoning up something otherworldly and leads us into the darker side of the band.

Burn Me Clean is chaos theory in affect and a perfect example of a band knowing how to add dramatic dynamisms into their songs. A perfect song.

Following a track like this can be daunting, and many albums which have an epic centre piece normally fade away after, so it’s a clever use of running order skills to place ‘Only Hollow’ next.

Only Hollows’ title is a nod to My Bloody Valentines’ Only Shallow and is a very apt title for this concise piece of noise-pop. A gentle but effective landing after what has gone before.

‘Afon’ (Welsh for ‘River’) is Celt doom-folk at its finest and contains an absolute stunning vocal performance and is a lovely dip back into darker terrain before the (I’m not gonna say the ‘G’ word but it was a music genre in the late 80’s-mid 90’s given to bands predominantly from the Seattle area) type of sound of ‘Song For Junko’. A delicious guitar song that will have any teenager, with any sense, learning all of the guitar parts before the end of the year. Junko fades straight into final track O. O is the only track only album that reveals Thought Forms fondness musically for label-mates BEAK> so when, just around the mid-point, the track explodes into pure carnage, the effect is even more startling. Fans of Dry-era PJ Harvey will love this.

I cannot overstate how much I enjoyed this album. With so many shifts in ideas and feel, it was great listening to a band just put it all in there with disregard for chart sales etc and come out with such a complete and masterful album. The title itself is a reference to a large mountain range the size of the Alps that is hidden under the snow and ice of Antarctica. This metaphor is not only extremely apt for the music within but for the band themselves as I have a feeling that once people start connecting with this album, Thought Forms will not be hidden for much longer.

All words by Simon Tucker. More work by Simon on Louder Than War can be found here.