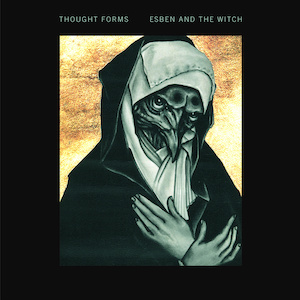 Chris Holding reviews the brilliant split album by two artists Louder Than War have a lot of time for, Thought Forms and Esben and the Witch.

There are so many positive things are there to say about this split LP by Thought Forms and Ebsen (released through Bristol’s Invada Records), but I must get the negative bit out of the way first: the lyric “open your eyes”.

Bands of all persuasions have been insisting listeners either keep their eyes open or, God forbid, “hold on” for time immemorial and it needs to stop, because it’s lazy writing.

The offending gambit comes a few seconds into Thought Forms second salvo “Sound of Violence” and it’s the only misstep in their contribution to the otherwise dynamic and bruising Split LP.

Thought Forms (taking the first four of six tracks on offer here) open with Your Bones which echoes Warpaint and MBV but takes the woozy, shoe-gazey unease to their own space. It’s a perfect introduction and indicative of the reasons I loved split indie releases, as a teen, during their last bout of popularity. Sound of Violence, lyric aside, is musically the least arresting track on the LP, but it’s still a solid conjunction between Your Bones and the joyous For the Moving Stars: with its riff bouncier and more effervescent than Tigger at a Bis (Google ‘em kids) gig. It’s an absolutely brilliant track that recalls Pavement, Dinosaur Jr and The Breeders all at once while still remaining, thoroughly in Thought Forms territory. Closing their contribution is Silver Kiss which, almost, makes up for the earlier lyrical faux pas and is equal parts harmony and brutality. It’s a style the band straddles brilliantly, making the prospect of a fully autonomous LP a very interesting prospect.

Ebsen and the Witch are certainly not backward in coming forward with No Dog. A barrage of bass and drums eventually give way, under their own weight, to Rachel Davies breathless intonations before building back to a rapturous climax, with unison vocals bellowing “I am no dog, I am a wolf”. It’s primal, pagan and viciously loud and it’s head and shoulders the best track on the LP. While Ebsen’s closer, Butoh, ploughs a similar furrow to No Dog it has the misfortune of simply not being No Dog and shouldn’t be judged too harshly for that. It’s nine minutes of intense, tribal mystery which, I can only imagine, sounds mighty when performed live.

Ultimately the most pleasing thing about the Split LP is the fact it sounds like a cohesive whole rather than a “to me to you” collaboration, which is more than you can say of many guitar albums currently occupying the charts. If we’re lucky Invada will release more gems like this and sharpish.

Grab a copy of the album at this Bandcamp link: bit.ly/Thought_Forms_Esben_Witch.

All words Chris Holding. This is Chris’ first post for Louder Than War.