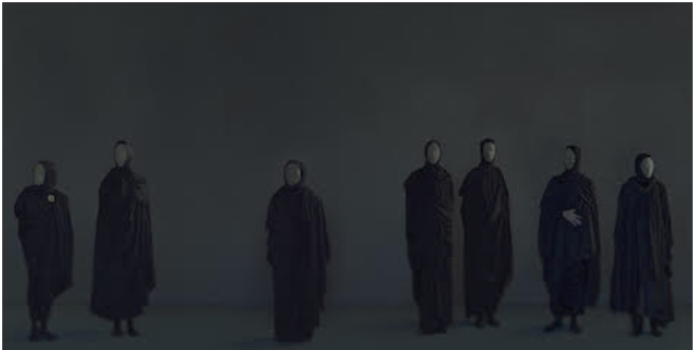 Press Photo By Craig Mulcahy | Hi Res Version Here
THOU ANNOUNCE COLLABORATIVE ALBUM WITH EMMA RUTH RUNDLE:
MAY OUR CHAMBERS BE FULL OUT OCTOBER 30TH ON SACRED BONES
LEAD SINGLE “ANCESTRAL RECALL”
Today, Thou have announced their collaborative album with Emma Ruth Rundle (appearing courtesy of Sargent House), May Our Chambers Be Full which sees its release October 30 via Sacred Bones. Its monolithic lead single, “Ancestral Recall” exemplifies the spirit of the collaboration. “It’s an easy marriage of our styles that was truly enhanced by everyone’s input during the arrangement process.” Thou’s guitarist Andy Gibbs explains. “When I first wrote the main two riffs (the first one being an homage to A Perfect Circle’s ‘Sleeping Beauty’), I didn’t know if it would fit with the vibe we were pursuing because it didn’t sound “Thou-y” enough nor did it sound like something Emma would normally put on a record. Ultimately, I realised how important that trait is; this record is all about exploring territory we wouldn’t usually explore with our own records.”
Emma adds, “Andy originally wrote the riffs and I believe I referred to it as the ‘Guitar Hero’ jam — it was hard for me to keep up and I felt like I was doing an obstacle course (in the best way). Because of the differences in our guitar tunings, it was difficult for me to match the rest exactly and I ended up coming with a single note passage to play over the most difficult section. For me this was a good example of the collaboration and that I was able to express my style despite my limitations in a way that added to Andy’s riff. Working with him on guitars was a challenge, but most rewarding, and I feel proud of our child.”
DSP / MEDIA EMBED:
https://thou.bandcamp.com/album/may-our-chambers-be-full
While their solo material seems on its face to be quite disparate, both prolific groups have spent their lauded careers lurking at the outer boundaries of heavy scenes, each having more in common with DIY punk and its spiritual successor, grunge. The debut straddles a similar, very fine line both musically and thematically. While Emma’s standard fare is a blend of post-rock-infused folk music, and Thou is typically known for its downtuned, doomy sludge, the conjoining of the two artists has created a record more in the vein of the early ’90s Seattle sound and later ’90s episodes of Alternative Nation, while still retaining much of the artists’ core identities.
Lyrically, May Our Chambers Be Full is a marriage of mental trauma, existential crises, and the ecstatic tradition of the expressionist dance movement. “Excessive sorrow laughs. Excessive joy weeps.”  Melodic, melancholic, heavy, visceral.
The visual art accompanying this work was created in collaboration with preeminent New Orleans photographer Craig Mulcahy. The faceless, genderless models are meant to emphasise this pervasive state of ambiguity and emotional vacillation, the images falling somewhere between modern high fashion and classical Renaissance.
May Our Chambers Be Full is out October 30th as part of Sacred Bones’ Alliance Series of collaborative releases which includes recent works from Uniform & The Body and Marissa Nadler & Stephen Brodsky. To pre-order go here.