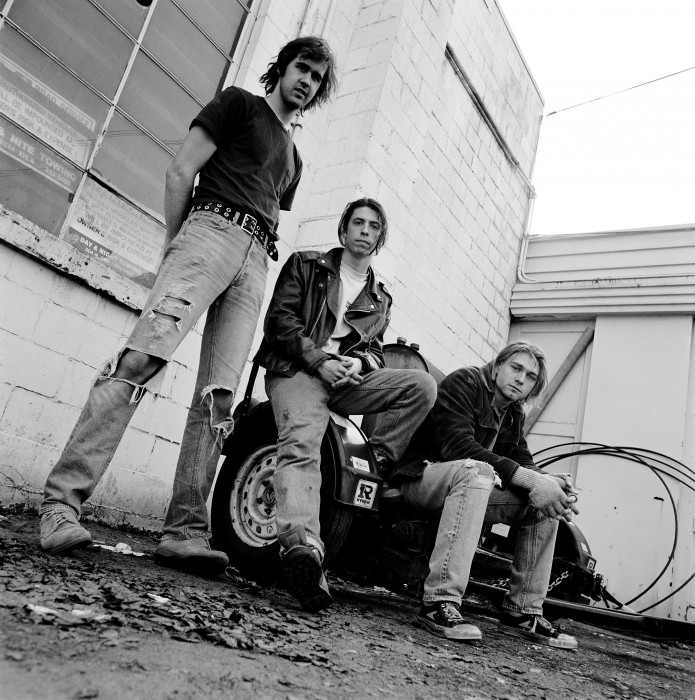 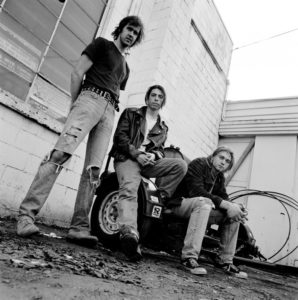 Like Nirvana’s appearance on Tonight with Jonathan Ross, there are those special moments when some of our favourite bands and singers appeared on TV shows where they didn’t quite fit. David Beer reflects on what these moments reveal for Louder Than War.

Beige Jacket. Shoulder pads. Gold shiny tie. Immaculate quiff. Smug expression. A neutral peach-flecked backdrop. Jonathan Ross slips into one of his smooth segues. It was the summer of 1991. Ross introduces Nirvana who, he tells us, are going to play Lithium “yes, sir, indeed”. A part the set lifts up revealing Nirvana – they launch into Territorial Pissings.

This has long been one of my favourite TV music moments. I didn’t see the live performance, I came across the clip on my VHS video copy of Nirvana Live! Tonight! Sold Out!!. It’s not just that they switch song nor is it simply that they play a raw version of the least commercial song on Nevermind, it is the contrast between them, their sound and their setting. They race through the song, finishing it and promptly walking off to a cacophony of feedback, unsettling a few bits of equipment on the way. Leaving the audience audibly bemused. Cut back to Ross for another smooth segue and cheeky comment. It’s the contrast between the setting and the band that makes it such a great moment. The slickness of the show is juxtaposed with the rough edges of the band. It’s a famous clip, but it still carries some of the drama and sense of disruption that it represents. Nirvana, despite being a big commercially successful band looked like matter out of place on mainstream TV.

This is far from a unique moment. There are lots of times when bands or artists have appeared on TV and looked out of place, like they don’t quite fit with the surroundings. There would occasionally be a mater-out-of-place type performances amongst the bopping glitz of Top of the Pops. A band might show up to play their single on a Breakfast TV show, a daytime magazine programme, a talk show or maybe at some awards ceremony or other, not quite belonging with the scene. We have probably all got our own lists. These moments where the music is out of place lend a heightened sense of an alternative culture. The contrast serves to make the acts feel more different. Glistening against the banality. The contrast emphasises the idea that the music is somehow subcultural – even if, like with Nirvana, it is actually not that far from the mainstream, just in a different form. The sense of alternative culture is more pronounced where it comes into the orbit of the things it is not. These are points where different cultural movements, with their own rules and norms, clash together.

These types of performances even found their way into the first episode of the spoof TV chat show Knowing Me Knowing You with Alan Partridge, which was broadcast about three years after the Nirvana performance. In that episode an imaginary punk band provide a disruptive performance that contrasts with the straight-laced TV format and presenter. The fact these moments could be replicated on a spoof TV show suggests that they were an occasional if not common occurrence. These types of moments had to be regular enough for this reference to work. With the spoof, as with the actual cases, it is the disruption and the disturbance to the usual running of culture that makes it work.

The visual parts of music culture are now much stronger and more dynamic than they were then. Artists can create and share their own videos much more easily, then there are the many live performances that are captured, and we can even go back and re-watch those old moments like the Nirvana TV appearance – we now have vast audio visual archives of music cultures past and present. This enables a much more vibrant and diverse visual side to music culture than we have had prior to the last few years. Alongside this, music on the main TV channels has changed its presence. The talk show format has changed, either going late night or excluding live music performances. The rare occasions of live performances on TV are unlikely to go beyond quite choreographed performances from carefully curated artists – either that or they are restricted to dedicated live music TV shows where such performances would belong anyway, and which are again late night watching. As a result, it seems we are less likely to get these rare moments of contrast, of matter out of place. Cultural consumption has become more fragmented, with greater diversity but with fewer opportunities for crossovers between these cultural streams.

The visual side to music has evolved and adapted as it has become much more decentralised, opening opportunities for creativity and for different ways of complementing music with the visual. The erosion of the presence of dynamic cultural forms in mainstream, prime-time TV means though that those matter-out-of-place moments seem less likely to happen. I’m sure they will still occur, probably very rarely, but the conditions are not really conducive. This is reflective of the broader fragmentation of media. We can pursue our own interests and be immersed in the visual dynamics of music cultures in ways that just weren’t previously possible, the question is whether those sudden jolting moments of movements clashing are still possible. Because people are consuming in their own different ways, if these moments do occur they might be more pronounced and carry even more power than Nirvana momentarily infiltrating the prime-time talk show seen.

Words by David Beer. You can find out more about his writing on his website, he is also on Twitter.