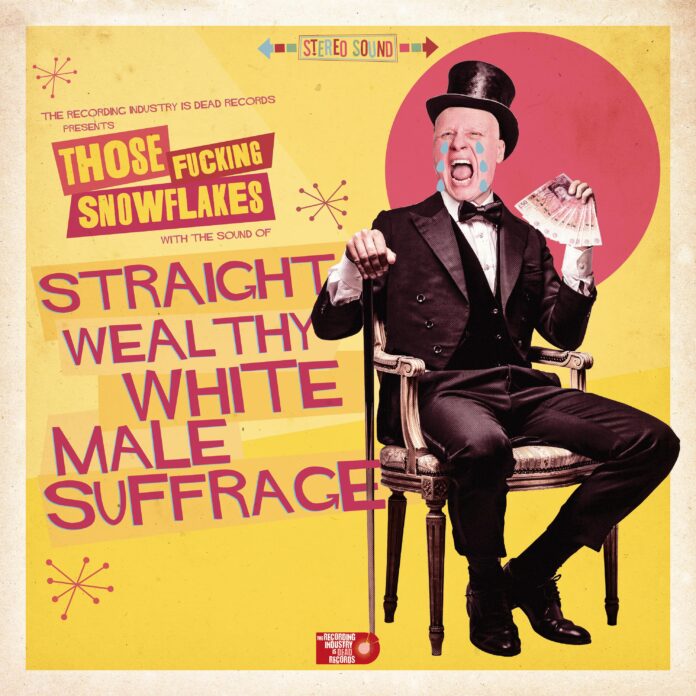 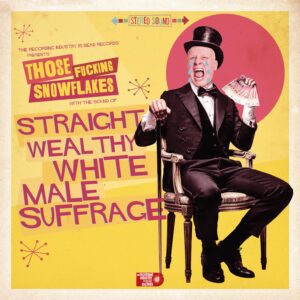 The Record Industry Is Dead Records

Blackpool punks TFS return with an EP of (comedy?) punk politics to shake down those lockdown blues reckons Wayne Carey….

Formed in November 2018 just as a way to get all the anger about the terrible way our society currently is off their chests. They picked a name that meant they were never destined for Radio 1 because they were just playing the songs as a form of therapy, they never thought anyone would pay attention to them so having an expletive laden name didn’t matter.

Those Fucking Snowflakes released their debut song Stop Being Dickheads To Each Other in October 2019 which quickly gained a massive amount of support from Tom Robinson at BBC 6music. Tom fought hard to get an otherwise ‘unsuitable for radio’ band onto the airwaves via 6music. He even invited them down to the BBC Introducing Festival in London to do a quick guest spot with Jason Williamson of Sleaford Mods during his panel.

The band really come into their own in a live setting though, having played a huge amount of gigs across the UK since first making their live debut in April 2019. The recent Corona-virus problem put a stop to their live plans for the year, with the highlight of playing at the massive Rebellion Punk music festival at the Winter Gardens in Blackpool also being put to bed due to the festival being cancelled.

Straight Wealthy White Male Suffrage is the second EP from TFS, recording finished just before lock-down so it was able to be mixed over the course of helping keep the virus at bay by staying inside.

It contains five rants – opening song Only Weak Men Fear Strong Women is a call out to the chauvinistic cavalcade, who seem to think they are superior to women due to having testicles – whilst in actuality all they are doing is exposing their own insecurities and weaknesses. It’s a nice start to this art punk rollercoaster. A sharp young angry blast of a tune.

Boris Johnson and the Big Red Bus of Bullshit is about, well what the title sounds like. Bojo’s Brexit Clown-Show and his inability to actually say something that is true – all screamed over some jazzy beats before getting all proggy for the ending. It’s the oldest song on the EP and was one of the first written by the band.

Third track Meat Is Murder, But Morrissey’s a Dickhead is a tongue in cheek expression about being continually disappointed by Morrissey, such a great artist expressing such distasteful views on a constant basis. An hilarious rant and moan put into two minutes of madness. An angry shouty song that tries to explain what most people think about him these days. He probably wouldn’t give a fuck anyway…

Carnibores is about the boring things people say to Vegans and Vegetarians, tired old jokes and clichés they hear just because of dietary choices. It’s the newest on the EP, a complex furious hardcore commotion. Probably the loudest thing on here and the only song I’ve ever heard with the word “Bacon” getting a fuck-o-meter count. Hilarious.

The EP ends with Tangerine Pirate of the NHS as jaunty pirate punk song about how Donny is licking his lips at the thought of getting his ‘tiny orange pussy grabbers’ all up in our healthcare system. Another rant yet with added sea shanty punk folk noise for all you grubby land lubbers.

Who says music and politics don’t work? This is a fun blast of lefty views written before lockdown (expect a COVID19 / BLM EP shortly) covering subjects talked about in general when we were allowed to go to pubs (remember them?). It’s not controversial, yet it won’t be played on the radio. They are in some ways like a fuzzed up shouty Half Man Half Biscuit, touching on real matter with a tweak of comedy. It not earth shattering but it hits the spot for the punks in us out there!

Song explanations by TFS. Other words by Wayne Carey who writes for Louder Than War. His author profile is here.