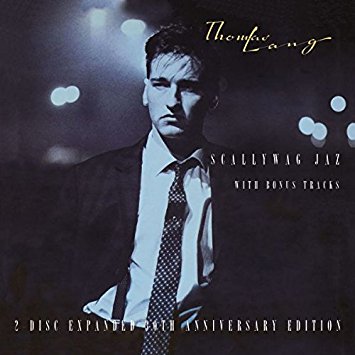 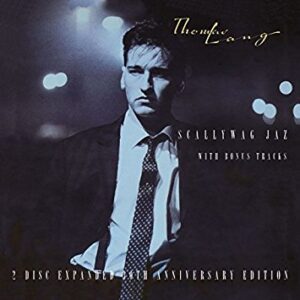 With his debut album, Thomas Lang was just a heartbeat away from stardom. His chiselled good looks would have seen him grace many a magazine cover and his gentle soothing voice should have featured on many a mainstream radio show. Sadly, it wasn’t to be, as commercial success eluded the release of his debut album Scallywag Jaz but, critical acclaim was and still is bountiful. What made it so wonderful was its seemingly anti-pop content. Sure, we had witnessed pop-jazz before but this was a whole different kettle of fish as it concentrated on a far more mature sound further down the Jazz road.

Co-written and co-produced by David A Hughes (OMD, Dalek I Love You, The Lotus Eaters) and Pete Smith (Squeeze, Del Amitri, The Police), Scallywag Jaz was notable for its inclusion of a cover of the Billy Paul classic Me And Mrs Jones which became somewhat of a ‘Major Tom’ for Lang as the character appears in no less than four titles on this edition. His treatment of the original is nothing short of superb, stunning bass and lazy hazy saxophone compliment a tenor voice which is warm and inviting in the same way that contemporaries like Sade and Alison Moyet gained incredible success from. Addictive and impressive, Me And Mrs Jones is a fine example of a singer with much to offer.

Shoelaces (Mrs Jones Part 2) sees the main character encouraged to leave her abusive husband in favour of Lang and is a misty, swinging piece of drama if ever there was once. Vocals echo and disappear into the distance as the track closes and the instrumental Mrs Jones Meets Godzilla and Have You Met Miss Jones? compliment the quartet of tracks influenced by a clearly amazing lady. The later details a chance meeting with the young lady and his clear instant infatuation.

But, Scallywag Jaz is far more than a cover version as can be seen from the thirty-six tracks included on this edition. The album opener, Fingers & Thumbs begins with a piercing piano and a wonderful bass sound sliding unconventionally throughout the album, with torch vocals that hint at what is to come later down the line. Lang is in control instantly and for a young man displayed a talent and gift which was rare to find.

The Happy Man gave Lang a taste, if somewhat limited, of chart success as it crept into the Top 100 singles chart and proved to be one the most commercial tracks. Again, greater success eluded Lang and must have been disheartening as its poppier approach could quite easily have nestled its way on to Radio 1 at the time. Injury showed a darker side and was superb for it and Spirit continued the torch theme that he seemed so comfortable with. Further additions from the package of The Happy Man and the extra tracks from the original release of the album complete disc one.

Disc 2 provides alternative mixes, live versions and two brand new tracks in Scared (a six minute jazzed up affair) and I Believe (a poppy pan-piped radio friendly track). As you’d expect, three versions of The Happy Man grace this disc, the live versions of which form part of nine tracks recorded in Tokyo in 1991 and Liverpool in 2011, and confirm Lang’s ability to perform faultlessly live.

Scallywag Jaz is undoubtedly one of those great albums that seemed to slip through the net and consequently off many music fans radars. This special edition gives the album another chance to prove what a fascinating and enjoyable piece if work it is.

What Would Gary Gygax Do? by Tim Cundle & Rachel Evans...