Eights songs, that’s all it took for Thomas Cohen to mesmerise the audience and leave his mark on the Crowd. Louder Than War writer Vanessa Lourenco and photographer Melanie Smith report back from the live show in Manchester where they too, were captivated.

Former frontman for the experimental punk band S.C.U.M. has just released an album that was 3 years in the making. Between retreating to Iceland to immerse himself in the creative process for the new tracks, and the grief of becoming a widower after the tragic death of his wife Peaches Geldof, at the early age of 25. Therefore his debut solo album is about the rollercoaster he experienced throughout this tumultuous part of his life. He is touring the UK to promote the album to which he is gaining a lot of critical acclaim.

Cohen’s first supporting act “Native Kings”, are a Liverpool male trio that have all the right ingredients to become an overnight success. It’s a beautiful mixture of pop punk nuances under an indie-rock-meets-funk vibe. It sounds like Arctic Monkeys met Paramore and they’ve created a well balanced band with a very energetic and charismatic frontman. They’ve just recorded 3 new tracks and are on the move, so keep an eye open for them, definitely worth seeing them live.

The second support act also worthy of a mention, are a trio called “Blooms” who hail from Manchester. They have a Nirvana spark about them, well the singer does tell us awkwardly that he doesn’t normally wear hats, but he’s been listening to a lot of rock lately, especially Sonic Youth. And no band can go wrong with those references. 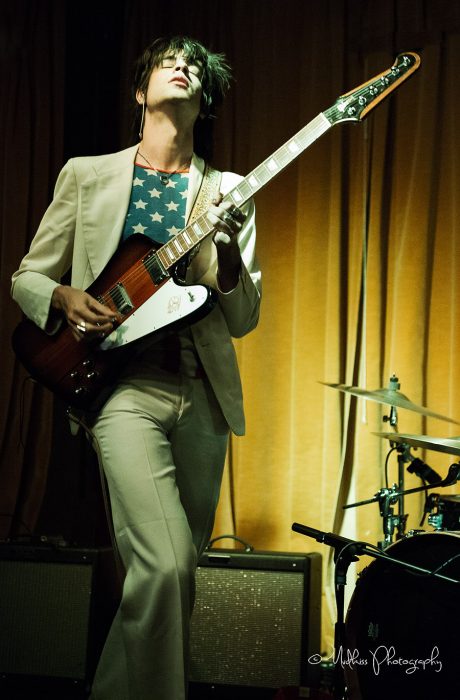 When seeing an artist such as Thomas Cohen, you have to expect glamour and a sprinkling of superstar attitude and Cohen delivered. As soon as the stage is cleared by the support act, his entourage storm in with their equipment, set lists and gaffer tape to make it the perfect set. Four musicians complete his band: drums, bass, guitar and keyboard. Thomas is the frontman, the face, the voice and he also plays a mean Gibson.

There are some diva moments where you can see him pouting over the microphone stand not going as high as he wanted, the feedback on the guitar not being as loud as he wants, or even when his baseball cap falls off his head. But that is merely part of the true artist he is.

In his straight out of the 70s American style, wearing an ivory white suit, a well worn t-shirt with the American flag emblazoned, aviator style sunglasses, baseball red cap and (just when you think the finishing touch will be a pair of cowboy boots), he steps on stage simply barefoot and stunning. 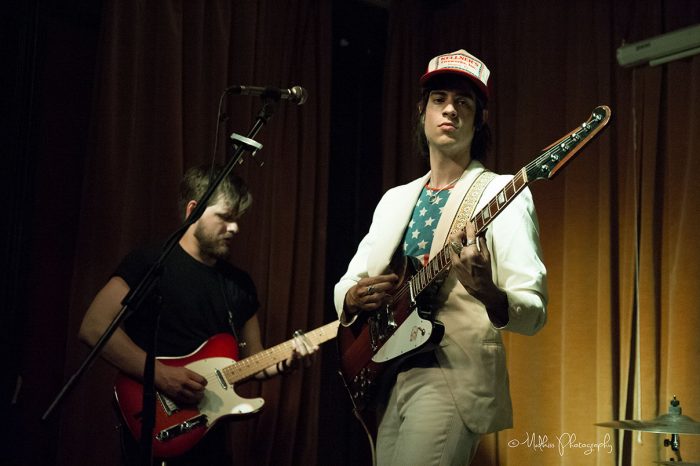 He doesn’t engage much with the audience until halfway through his set, with a shy introvert voice he introduces himself, the band and the name of the next song. It’s simple and plain. He tells us a story about how the song “Country Home” is misunderstood because it’s actually about melted Countrylife butter. You can tell he’s starting to feel a bit more at home and warming up to the small but star struck audience.

He has a stage presence that is impossible to ignore – he is a question mark of mannerisms with his smooth hip swings, his skin covered in jewellery, his unexpected back lashes; it feels as though he carries an androgyny that makes him even more intriguing and unique. Even though he is over 6ft tall he moves delicately and smiles shyly, sings into the microphone with his eyes closed, as if he is savouring a sweet memory. 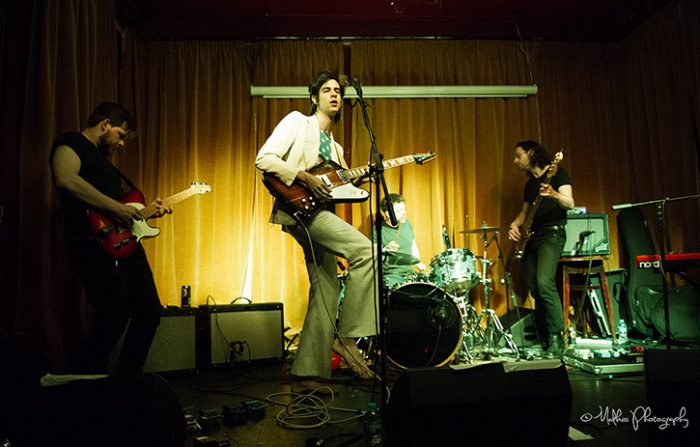 Which brings us to the piece-de-resistance, the penultimate song “Pissing In A River”, which he announces by saying, “This song is called incontinence and I am the friendliest psychopath in the music industry” and this fits his performance during this song perfectly! There is a waterfall of emotions attached to this song, like a strong rumbling of water that tumbles down a cliff and crashes vivaciously and brutally onto the emptiness beneath it.

The song starts with a quiet melodic intro, but quickly evolves into this raging savage of a man possessed by his uncontrollable emotions. He rolls onto the floor, he crawls from one side of the stage to the other, he jumps on the speakers, he pretends to launch himself to the crowd – he’s there, he’s raw and truly dramatic in his performance. He gives us a mystical moment of emotion and naked feelings. It’s an incredible version of a classic Patti Smith number taken from the ‘Radio Ethiopia’ album. Thomas made it entirely his own and that is no mean feat. 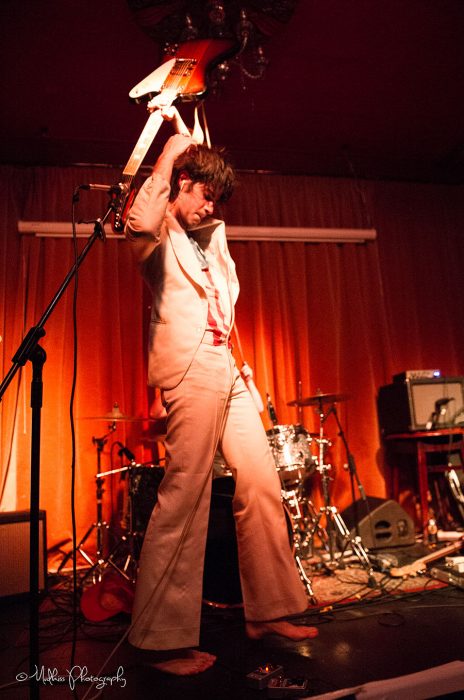 And finally he wraps it up with “Mother Mary” that reminds you why indie pop is more of a spiritual soundtrack and gives you that ethereal feeling of “it’s all in the moment”. He exits the stage after almost throwing his guitar up in the air, a bit of a rock n roll moment, and leaves us all breathless.

Even though the venue is only a small room for about 100 people, it wasn’t a full room at all and it’s a shame, because the people who didn’t turn up missed one hell of an artist. On the other hand, it’s an act of bravery going out to small clubs with barely any crowd, seeing that he doesn’t have to. This is his message to the world that he’s been through a seriously rough period and yet, he manages to summon the best in him and deliver it on stage, to whoever wants to see it.

His album is called “Bloom Forever” and is out there. Go and get it, it’s a keeper.

You can keep up to date with Thomas on Facebook, he also Tweets here
Catch up with Blooms on Facebook and Native Kings you can find on Facebook