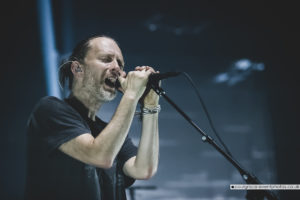 Thom Yorke has responded to criticism by film director Ken Loach over the band’s upcoming in Tel Aviv. Ken Loach had asked for a meeting with the band to discuss the issue (apparently some of his own films are being shown in Israel which the band could discuss with him…)

In the Independent Ken Loach had written: “Radiohead’s stubborn refusal to engage with the many critics of their ill-advised concert in Tel Aviv suggests to me that they only want to hear one side – the one that supports apartheid… Radiohead need to decide if they stand with the oppressed or with the oppressor.”

“Playing in a country isn’t the same as endorsing the government. We’ve played in Israel for over 20 years through a succession of governments, some more liberal than others. As we have in America.

“We don’t endorse Netanyahu any more than Trump, but we still play in America.

“Music, art and academia is about crossing borders not building them, about open minds not closed ones, about shared humanity, dialogue and freedom of expression. I hope that makes it clear Ken.”

Loach is one of those supporting a cultural boycott of Israel over its actions in Palestine; he, along with the likes of Riz Ahmed, Brian Eno and Caryl Churchill refuse to perform in the country, or take funding from their government or institutions linked to it.