Home Film Reviews This Much I Know to Be True (Nick Cave & Warren Ellis)... 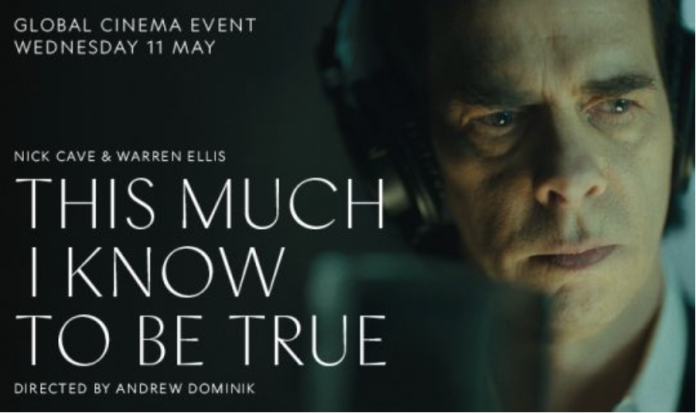 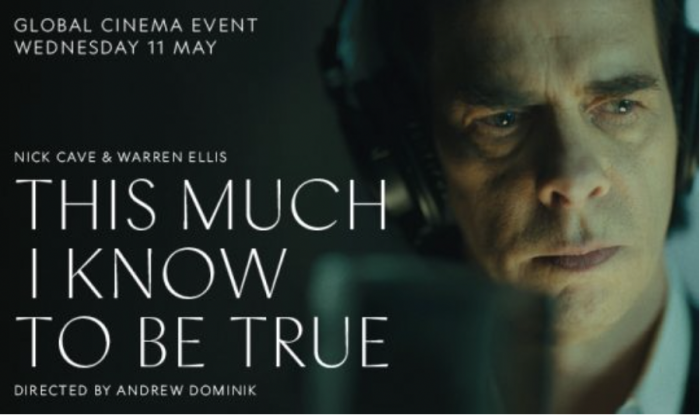 This Much I Know to Be True (feat. Nick Cave & Warren Ellis)

A Nick Cave and Warren concert film of creation, captivation, and redemption, featuring songs from Ghosteen and Carnage.

On the one hand, you might describe This Much I Know to Be True as a concert film: it features onstage performances from Nick Cave and Warren Ellis that move through a catalogue of songs from their two most recent albums as collaborators (Carnage, 2021) and as Nick Cave and the Bad Seeds (Ghosteen, 2019). On the other hand, it’s something else entirely: an exquisite collage that draws the viewer’s attention to the often indiscernible line between creation and fabrication, the false binary of devil and god, and as Cave says in the documentary, “the great act of insubordination to the vagaries of life.”

This Much I Know to Be True opens with Nick Cave explaining, with irony, how he responded to the absurd government suggestion that musicians impacted by the pandemic train for another job. He “retrained as a ceramicist,” he tells the camera, and invites the viewer into his studio. Initially pointing out various Staffordshire flatbacks from ages past (some kitschy, some peculiar, some even banal), Cave begins to present his own works of creation: 18 figurines that together tell “the story of the devil.” As a collection of objects that narrate a life in succession, the ceramic works present a kind of antithesis to the Stations of the Cross. They invoke, perhaps, an unnerving flipside to artist Barnett Newman’s secular paintings “The Stations of the Cross: Lema Sabachthani” (1958-66). Both invite the viewer to reflect on the relationship between aesthetics and the human condition. Toward the end of his series, Cave’s figurine entitled “The Devil Bleeds to Death” recasts the image of the pietá, substituting Jesus for the devil.

In Cave’s ceramic work, he’s the creator, but he’s also quite clearly the devil figure. In inhabiting both roles — or at least leaving open the possibility — he questions the idea of godly creation, blurring the line between who creates and offers redemption, and who evacuates those endeavours. Conjuring Mikhail Bulgakov’s character Woland (in his novel The Master and Margarita), Cave ultimately suggests that the devil is a mischievous figure who is also capable of bringing about deliverance.

Dominik’s direction in the film, and director of photography Robbie Ryan’s camera work, draw on this opening framework throughout This Much I Know to Be True. Complementing the music, the formal cinematic techniques ask us to question the binaries we believe to be true in order to find ourselves in an evanescent in-between that offers a kind of grace.

Creation is, of course, at the root of This Much I Know to Be True: Cave and Ellis’s music, the film itself, and the idea of making life anew in the near aftermath of the pandemic. Dominik and Ryan point to the ways in which creation is at once miraculous and, at the same time, a product of careful fabrication. The performance scenes in the film were shot on a single stage equipped with a circular camera track that often appears in frame, demystifying the magic of moviemaking. This film is the product of a technological setup. At the same time, when the cameras cut in and sweep around Cave, the illusion returns and Cave becomes a figure at the center of the cinematic universe. Some of those sweeping, circular shots also recall flashbacks in prominent film noirs like Jacques Tourneur’s Out of the Past (1947), tethering this documentary to movie history and marking Cave as a protagonist.

Some of the most stunning visual moments in the film occur when the lighting and sound engage in interplay. For example, at moments across the documentary, as the volume increases in a song, the lighting too crescendos. Lightbulbs on the stage, at other moments, pulsate to the beats of a Cave and Ellis performance. Dominik reminds us that Cave’s work is deeply aesthetic, and that sonic material is inherently visual.

Music fills the majority of the film’s length, including twelve tracks from the recent records. Songs featured include Spinning Song, Ghosteen, Hollywood, Hand of God, Albuquerque, Lavender Fields, and Balcony Man. The performance of White Elephant is especially delicious.

Moments of levity abound, as well. Interview material with Ellis reveals that his computer background is completely overrun with downloads and saved files. “I don’t really have a sense of form and order,” Ellis laughs. The documentary starts to cut between Cave at his home and Ellis at his home, each discussing their respective creative processes. Editor Matthew C. Hart allows this interlude to become a scene of banter between Cave and Ellis — the musicians speak to one another in warm repartee through the sorcery of movie editing.

As Cave begins to discuss the Red Hand Files (the website through which anyone can submit a question to Cave and receive an answer), the documentary reminds us that Cave occupies the role of both devil and god. Fans use the electronic interface to ask what Cave describes as “desperate questions” like those posed to a deity. They “keep me at the better end of my nature,” he remarks, and graciously considers the small role he might play in offering a kind of salvation through his replies. That version of Cave appears on the stage as white light overtakes his face, cloaking him in a cinematic glow.

I find it difficult to imagine the moviegoer who couldn’t be moved by This Much I Know to Be True. The film opens worldwide 11th May.