Home Blogs This Is Manchester…Now 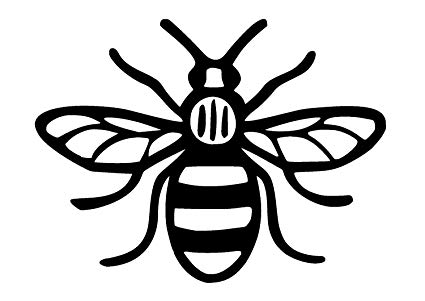 An opinion piece about the changing culture within Manchester – Will Metcalfe

Even on the rare occasion of sun in Manchester, there is always a greyness lurking over FAC251. At one time, it was the head office of Tony Wilson’s Factory Records. Now, corny student nights and questionably priced gigs somehow keep FAC251 afloat. Yet this sorry state belies the cultural boom currently occurring. There is a constant crane-shaped shadow over the city. The old is being outed by the new on a daily basis. From Market Street to Oxford Road, the city’s cultural evolution is clear to see.

Such a buzz hasn’t just been created by chance. Manchester has been crowned one of the fastest growing cities in Europe, with a 149% increase in the population between 2002 and 2015. As well, the number of active businesses rose by 18% between 2015 and 2016. Arguably, Manchester is also the city of preference for young people; 69% of its graduates choosing to remain in the city, with those who left the city, choosing to return. It seems that as the average rent of London property increases, so does the opportunity offered by Manchester. 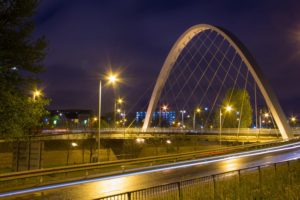 As deep as we are into the age of hyper-communication, it’s baffling how such an active underground music scene within our city has been left in comparative tranquillity. 15 years ago, things were just as any outside perspective of Manchester still gives it credit for today, as Dave Haslam provides; “A lot of younger bands were being held back a bit by people’s perceptions of what a Manchester band should sound like. Outside of the city, journalists and the media would always be harking on about Stone Roses this, Oasis that, Hacienda etc. And if they didn’t fit a particular perception then it was a struggle for them.” It would probably explain the success of bands such as The Courteeners, following the pre-established through line of lad-crusted, football-adopted indie bands, currently resting on the plectrums of Blossoms and Cabbage. White, male, and boxed products of the ever-dominant SJM.

But there’s always an alternative. Not everyone takes a liking to what’s being broadcast on festival bills and mainstream radio. To the edgier individuals, expressing the alternative opinion is a trait to mould one’s entire character around. Shaping the counterculture of Manchester, bands such as PINS and Everything Everything existed alongside start-up promotion company Now Wave, Haslam recalls; ‘(Now Wave) were putting on bands that promoters like SJM weren’t picking up on and didn’t have time for. They were just following their passion and weren’t following a trend. They were booking DJ’s, as well as live bands. If they did put on a local band, they’d treat them the same as a band from Canada or Berlin.’ The influence of PINS can already be seen with the increased female presence within the band circuit, with the likes of LIINES and Witch Fever also having a significant reputation. The international vision of Now Wave has done untold amounts for various alternative scenes within the UK, being the first to book the likes of The XX, Parquet Courts and Death Grips to name a few.

10 years and the visionaries of Now Wave, Jon Wickstead and Wesley Jones stand triumphant, having successfully opened YES, a venue which has quickly become central to the cities live scene. Step through the door and at no point are you reminded of a past of glorified nostalgia. No Wonderwalls. No Blue Mondays. No I Wanna Be Adoreds. Just a winning example of what is required of a venue in 2019; cleanliness, value for money, and diversity of choice. 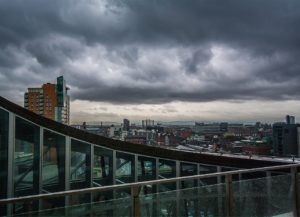 Now Wave are by no means the only promotion company expanding their visions to opening venues instead of just booking them out. Long term Now Wave collaborators, Strange Days, have teamed with the recently opened Fairfield Social Club, another recent addition to the gig circuit of Manchester. “Strange Days and the team at Fairfield Social Club have a shared vision and recognise the importance of support the UK’s live music scene, which plays a vital role in the cultural and economic vibrancy of our city.” Says Mark Dunn of Strange Days. “This opportunity gives us a greater platform to share bands in one of the most remarkable and atmospheric of venues and we hope we can use our collaborative experience to help other event organisers to do some amazing things here as well as hosting our own events.”

The perspective as an active promoter on the local music scene couldn’t be closer to the front line of what the cities music scene has to offer, and where our attention should be. Is the infamous, nostalgic shadow Manchester still prominent?

“No. I think it (the local scene) has huge respect for the past; The Smiths, Oasis, The Stone Roses etc, but I feel the current live music scene in Manchester is firmly looking to future. We’re seeing bands such as W.H.Lung, PINS, Working Men’s Club, The Blinders (to a certain geographical degree), all doing a different kind of thing. I’m very excited for the future of music in Manchester and have absolute faith. It’s only going to get better.” 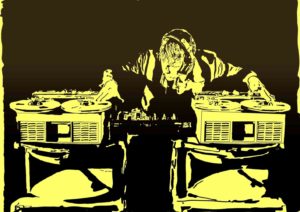 The student population of Manchester is currently estimated at 350,000. Being such an active centre of gravity for further education, the diversity of artists currently based in the city is wider and more inclusive than ever. Such artists include the likes of Irish singer-songwriter Solis; ’I’ve found that Manchester, in general, is quite open to change and new sounds. Synth pop/ rock is quite prominent at the moment, whereas everyone was playing psych music when I first moved here.”

It is also the current home for post-punkers, IST IST; “We can see so much amazing independent work being done in the city. It could be said that we’re living in an era similar to the early ’80s. We’re in a political mess, which gives creatives so much ammunition with the correct vision.”

“It seems as a city we’re at the precipice of abandoning nostalgia and audiences/ artists alike are genuinely excited about new sounds, new influences and pushing the envelope in a way that challenges the preconceptions of ‘Manchester music’ on a fundamental level. It’s that potential for growth that excites me” provide the quirky, wonk-pop 6-piece Mealtime.

That bloody underground ey? It’s always lurking around, completely oblivious and uncaring to what’s being force-fed into the world. There is the entertaining story that The Chemical Brothers started out as a middle finger to what was going on at the Hacienda. The era of Now Wave’s dominance in modern Manchester is flying high, and there’s already a few amplified whispers in the YES smoking area calling about the venue’s uncanny resemblance to Leeds’ Headrow House. Create a mental image of the character you can imagine such a line coming from, and you would bang on perfect. Alternative opinions. Hipsterism. It’s how it all begins. You’ll sound like a twat at first. But no-one else will see the world through your vision unless you’re the first firm believer of it.