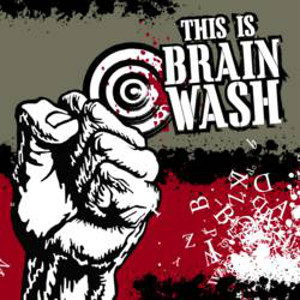 Nathan Brown checks out This Is Brainwash – a UK/Spanish collaboration for fans of Dead Kennedys, Lard, NYHC and 80s European melodic hardcore.

This Is Brainwash recorded this 16 track CD in nine different locations in Malaga, Mallorca and Southampton between 2009 and 2013. With 4 different vocalists and a time span of 4 years gestation it’s no surprise that there’s a fair amount of variation.  I was pleasantly surprised that it sounds like a coherent album rather than a compilation of different bands.

The sound is most definitely at the hardcore end of punk rock and This Is Brainwash draw on influences from across the spectrum of punk.  There are songs of the mid-paced rocky Rancid style, there is some 80s European Hardcore, there is a NYHC influence on a couple of tracks, a definite Dead Kennedys influence in both music and vocals on a fair few songs, a couple of songs that could have been lifted from Lard, and some that could be mistaken for Dee Dee Ramone‘s later solo output.  One track features some Motorhead worship in the vocals and consequently reminds me of Canadian punk-Motorhead wannabes, Inepsy so there is a wide sweep of diversity.  There is some excellent guitar work throughout – a Black Flag style discordant solo will pop up, some metallic guitar riffs and leads will seep through and I swear there is a bit of Killing Joke in the mix.

The lyrics have a general seething undertone:  anger at society in general and more specifically capitalism/materialism with a “fight back” message, some personal reflection of the “fuck you” kind (more anger, then), boredom (which as we know can turn to anger) and putting the anger to one side, a couple of tributes to punk: Too Young laments the loss of Malcolm Owen, Dee Dee, Pig Champion and a host of others and Stay True celebrates the hold punk rock takes on your life. I might say its standard punk fare, but that’s not meant in a dismissive way.  Deserving of special mention is Riot Dog Hates The Cops about everyone’s star of the Athens riots, Kanellos.  Ya know, that dog with the neckerchief who attacked the cops?  Fuck your popstar punk pinups, there’s a real hero! (Although according to his Facebook status he “is not a hero, heroes are all the ordinary people that struggle the financial order”).

The mad genius/Doctor Evil master mind of the band is bass player Paul, who wrote everything bar the lyrics on a couple of the songs. Along with guitarist Stuart and one of the singers, Mike, he played in the hardcore band Older Than Dirt 20 years ago.  They are joined by TV21 (not the Scottish new wave bunch)/Good Time Charlies drummer Andy and 2 Spanish singers: Jaime from Spanish punk band Cerebros Exprimidos gets 7 tracks and his singing has a vibrato characteristic to them making the comparisons with Jello Biafra (and perhaps the Crucifucks or Cowboy Killers) inevitable;  Toni Ramone from Holocausto Pomada is the fella who reminds me of Dee Dee Ramone on his five offerings.

All in all a well played diverse hardcore punk disk that comes across as a real band rather than a “project”.

Available from Suspect Device, Rough Trade, All Ages Records and from the band via their Facebook page

Words by Nathan Brown. You can read more from him here