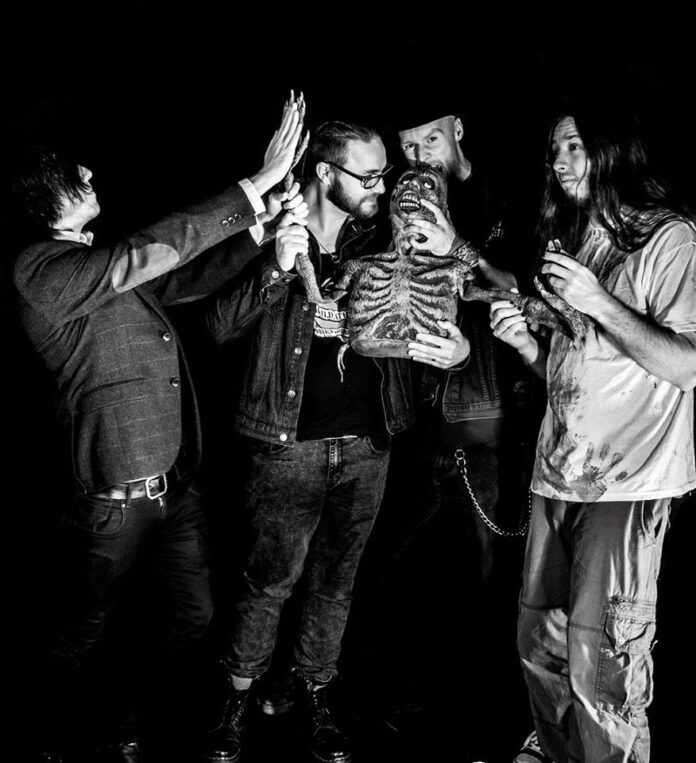 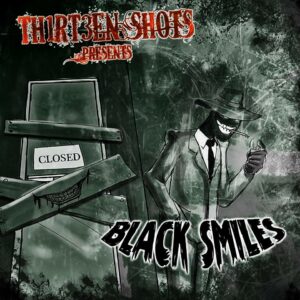 I like Thirteen Shots, they’re a noisy racket; the sort of band that your neighbour’s would bang on a wall at you for playing too loud. Except, add in the fact that you and your neighbours live in a graveyard and you’re all part of some freaky black and white b–movie. Yepp, I think I summed that up pretty well!  However, to describe Thirteen Shots as just a noisy garage style band, would be doing them a discredit. Mixing catchy, dare I say poppy at times, riffs with a punk edge and horror vibe.

Influenced by old double feature films and old cinemas, Black Smiles takes Thirteen Shots to a new level sound wise. Originally associated with the horror punk and psychobilly movement, I feel that this album takes them out of their comfort zone. Don’t get me wrong, there’s still a hell of a lot of horror – blood, guts, the number thirteen, you name it! I mean, if you’re expecting to hear songs about fluffy cats and nice boys, then you’re probably better off sticking with Taylor Swift. However, I do feel that the band address a lot more issues in this, than in their last release. They move away from what is expected of that genre. 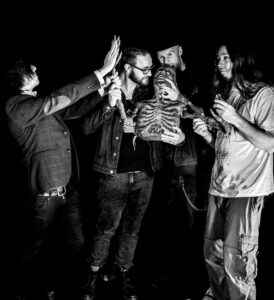 The Black Smiles kicks off with ‘Cobradeer’, a fast paced, full on punk and rock ‘n’ roll opener. The hard hitting song acts as a preview of what’s in store for people who have dared to press play on their music playing device; I don’t know what the kids have these days! Lead singer, Johnny acts as an announcer which only adds to the trailer-like atmosphere that the band wishes to create.

‘Run and Hide’ is just one of the many creepy tracks on the album. I mention this one in particular because it’s the first introduction to the horror theme that runs throughout Black Smiles.  Like Wednesday 13, the band approach horror subjects with an upbeat rock n roll vibe.  A great example of this would be the band’s ‘Werewolf Party’, which in my humble opinion is the most catchiest track on the album. Trust me, that bad boy is going to be stuck in your head for days.

However, unlike Wednesday 13 they’re a lot more punk, grittier and raw. Johnny’s vocals even  hints to me of Mark Arm. So imagine that him and the Murderdolls had a baby and I think you’re about there!

What I also like about Black Smiles is the variation on it. You’ve got the slow with the fast, the grunge through to the full on punk and of course, the complete instrumentation combined with the stripped back tracks. The contrast is great. The interlude is one of these more stripped backed songs. Its acoustic guitar allows listeners to have a break from the madness.

The wild card of the pack is most definitely ‘Lost Soul’. In a weird way it reminds me of The Lone Ranger and the Mexican countryside all at the same time. The Spanish styled guitars aren’t for everyone, but I thought they were perfect.

Overall my short review is: this album is good, buy it, listen to it, see them live, buy a t-shirt, love them forever. Sophie over and out.