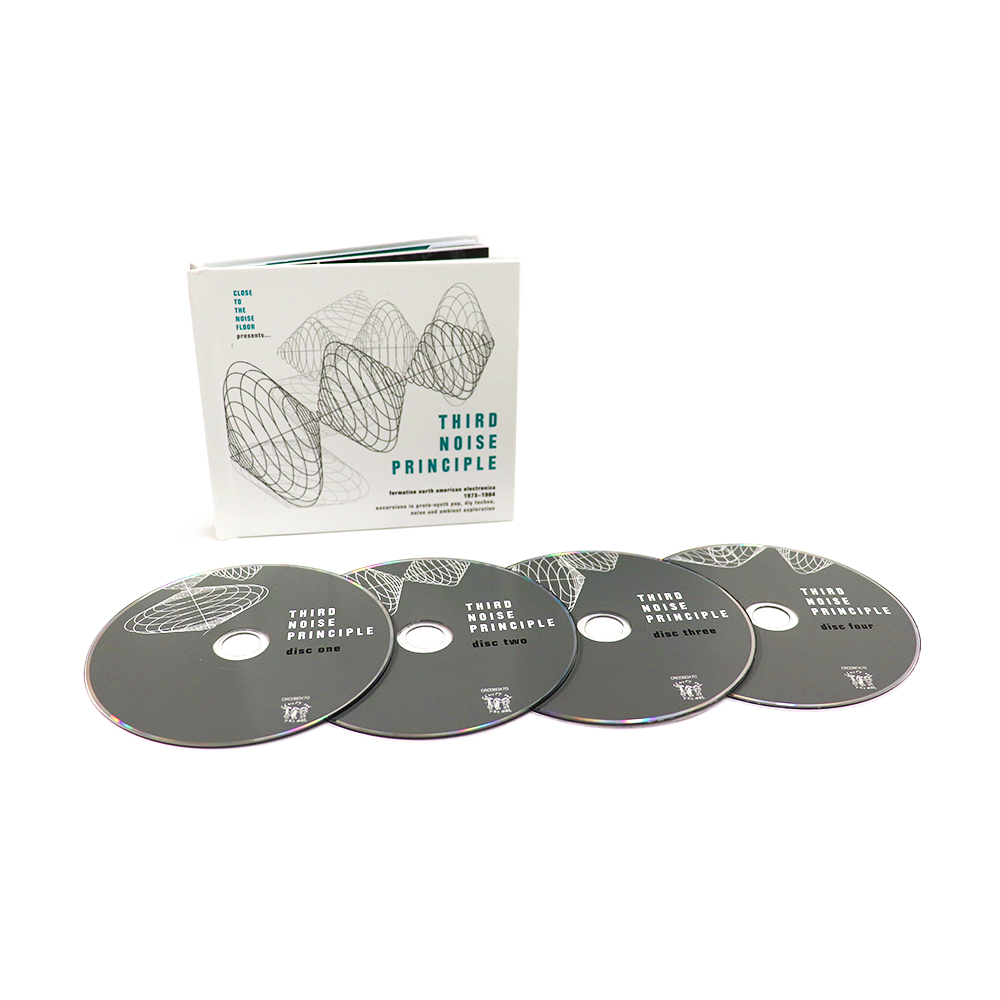 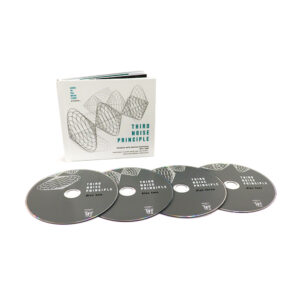 Third instalment in the Close To The Noise Floor series, this time the focus falls on the US and Canada, featuring key players in electronic music’s development, like Philip Glass, The Residents and Suicide, along with less well-known names including Voice Farm, Boy Dirt Car and Young Scientist. LTW’s Ian Canty hears the primal rumble of electronics, with the dancefloor just visible in the distance.

After the successful compilations Close To The Noise Floor (which surveyed the UK’s synth pioneers) and Noise Reduction Floor (looking at their counterparts on the European mainland), it was inevitable that there would be a third volume and it would take in the Americas. So that is what we have here, entitled Third Noise Principle. Very much in the same smart “book CD” boxset format, this is another whistle-stop tour of the sometimes frankly startling racket put together with primitive electronic equipment. The subtitle “excursions in proto-synth pop, diy techno noise and ambient exploration” does seem to suggest that the pieces contained were gently (or brutally) edging towards what would later be called “dance culture”, particularly the inclusion of the words techno and ambient.

That isn’t really that far from the truth, as although most of these tracks wouldn’t necessarily lead one to “bust a move”, what is presented here could be seen as building blocks in the foundations of techno and house. Sometimes it is only present as a mere sliver, amongst other plinks, plonks, treated voices, crashes and effects. Like on Dog And Master’s stuttering Slimy Stew And Pussy Gruel (extract), where a clomping beat barely breaks through for a couple of seconds before it is gone again. Elsewhere it is much easier to discern, for example on Data-Bank-A’s Creators, which could get people moving on an electro night today.

But perhaps the true worth of a lot of of the creations here isn’t just what they helped set in motion; it is much more about what they actually represented and sounded like. Quite often it resembled an electronic howl into the void, hoping to leave a mark and give any listener a glimpse into a harsh, machine-driven future that they mapped out in their minds. Though it has been stated many times before perhaps this was the real punk. You didn’t have to spend time learning a guitar or drums; you flicked a switch and you had music.

Scene godfathers Suicide are here with Ghost Rider and they alone perhaps really opened up the possibility of fusing synthesisers with punk attitude. Quite a few others here followed their example and the UK’s Cabaret Voltaire and Throbbing Gristle were also quite influential, along of course with German bands like Kraftwerk, Can and Neu!. Also you would have to consider the vision of classical composers, the art wing of punk and various other weirdos working in near isolation.

Tone Set kick off the box with The Devil Makes The Loudest Noise, with a repeated refrain tying into the rhythm that even manages to have a bit of funk about it. There’s a suggestion of a little hip-hop beat to Richard Bone’s soul electronica belter Mambopolis and Dark Day are very in the style of early Human League on The Metal Benders. Even so it isn’t a carbon copy; even if the lyric is a bit comical, this is a enough decent effort.

Smega’s Dancing Hairpiece Wears Two Left Shoes eschews the wackiness one might suspect from the title, being full of sawing sounds, treated vocals and skittering instrumentation. Voice Farm appeared on the Let Them Eat Jellybeans comp on Alternative Tentacles in 1981 with the track Sleep, a record which helped to introduce the likes of Black Flag and the Bad Brains to the UK. This brings home the link to US punk, but here they play it cool with the dream-like and oddball, AM City. Ramones producer, Craig Leon’s soaring Donkeys Bearing Cup is a highlight of this collection and the German Shepherds give us a real art punk synth heartbreaker in I Adore You. There’s lots to enthuse about on this disc in particular.

As we reach disc two, The Residents appear to go right back to the dawn of electronic experimentation with the previously unreleased 99 Space Music, very much in a similar mode to Joe Meek’s early 60s pomp. Hunting Lodge’s thunderous Simulation/Stimulation throbs and pulses with an addictive rhythm and Blackhouse’s Be Good, actually the work of one Brian Ladd, is ugly, fuzzy, but overall quite exciting to listen to.

Disc three takes us far more into the totally experimental area, miles away from the mainstream and even the more pop-orientated tracks on this compilation. This section of the boxset in particular is not easy listening. Having said that, big leaps forward in music are not often made by ear candy. This was new equipment being operated by people new unfamiliar with it, which produced not only new music, but also shifted the definition of what music was.

Having said that, Terry Riley and Michael William Gilbert lull us into a false sense of security early on. Riley, a collaborator with The Velvet Underground, offers us Across The Lake Of The Ancient Word, which has a timeless feel to its electric drone. MWG sought to make his music “more human” and as a result, Unwinding, his track featured here, is pleasingly reminiscent of the BBC Radiophonic Workshop. Things start to get a bit a little more spicy with the onset of Girls Of Fire’s Cat Vomit Punk House, which is more of a tape collage than anything else, full of savage edits, an occasional near dance beat and of course cats being sick.

Chrome are one of the better known acts on this disc and Inaccount by them mixes Helios Creed’s corrosive guitar with Damon Edge’s keyboards and effects to produce a mighty industrial dance crasher. What The Peeper Saw, inspired by viewing a film of the same name by the duo Smersh, is slow and sinister (in a good way) and Boy Dirt Car’s Catalyze (Subjection To Catalyst) crawling bass notes, anarchic mess of samples and cut-ups, somehow works. Mental Anguish sound very pretty on Sad Horror Film, with the lyrical concept alluding to the intrinsic tragedy of movie monsters and Controlled Bleeding finish things off with fire and explosions on Untitled #3.

The final disc here finds us back in a slightly more structured environment (there are some songs) and also there are plenty of efforts here that could be seen as pioneers/precursors of ambient and synth-pop. Nash The Slash, an ex-Prog Rocker done up like Claude Rains in The Invisible Man, signed to Virgin’s post-punk off-shoot Dindisc and toured with Gary Numan. He also nearly had a hit with a version of Jan And Dean’s Dead Man’s Curve. Womble (his track here) comes from his 1981 mini-LP, Decomposing and comes complete with a kicking rhythm made for the dance floor – great stuff. Sequencer People, who were linked to Young Scientist (their pulsing groove, Ice Floe is track twelve on the same disc), sound a little bit like Yello on Police Story and John Bender’s “fruit machines gone mad” sound on 36A3 is a lot of fun.

San Francisco neighbours, Tuxedomoon and Factrix come up with the goods, the former’s Cole Porter homage, Nite And Day is thrillingly frosty and the latter provide the beat-driven menace of Anemone Housing. The Ministry track here was a bit of a surprise to me, electro funk/dance not unlike Cameo in sound – a world away from their later industrial style. The following, final piece, Clerk Charade by Moev edges close to Smiths-type indie pop, and even manages an engaging bit of jangle in the machine.

Overall, Third Noise Principle more than fulfils its remit, taking us on a wild robot ride through the early years of electronic experimentation from the other side of the pond. For some, these early dabbles led to a career of mischief making; for others, what was a bedroom project took on a life of its own. Whatever the path of those involved, there is little doubt that their music assumed an importance in popular culture that could not have been foreseen at the time of recording, as they fed into the fields of dance music through trance, techno and house music. This boxset details the stories of those involved and what they produced here is never anything less than highly interesting and often much, much more.