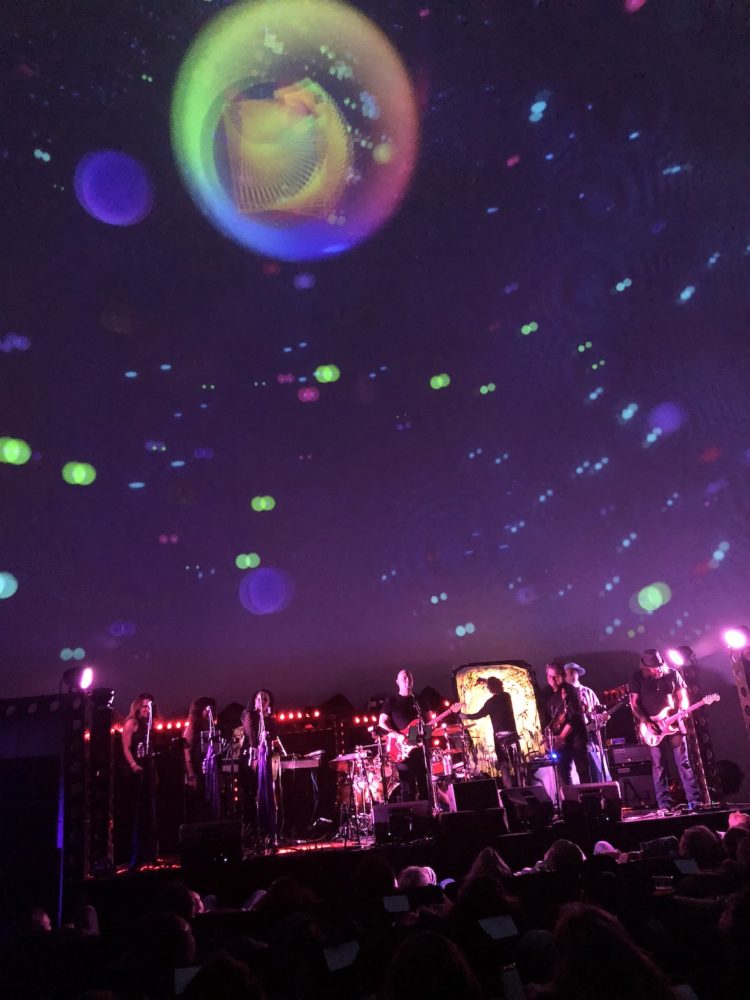 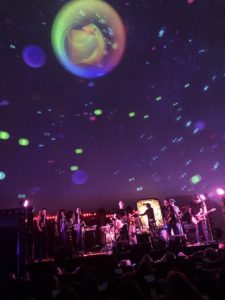 Ascension: the process of a spiritual awakening that movies you into a higher level of consciousness, best illustrates and illuminates the Think:EXP live concert. The manifestations of this awakening include: a feeling of connection, a synchronicity, an inner peace, and an increase of intuition, while rocking out to the music of some of the greatest musicians on the planet.

Think:EXP “Strives to revolutionize the entertainment industry by bridging the gap between the human spirit and technological innovation with one of a kind live, immersive concert experiences.” Taking place inside a 360º immersive dome (the LA Wisdome), a musical phenomena accompanied by virtual reality phantasm which thrilled, shocked and fascinated an unsuspecting audience.

Amidst the illuminated tapestry of the crudely macadamized sea- foam green colored turf and cemented asphalt lies a barrage of multi-chromatic fanatics of all ages waiting breathlessly in anticipation. Then suddenly the stage became a dazzling, vivid, salaciously fluorescent array of Pink Floyd music accompanied by a kaleidoscope of vibrancy lighting up the ceiling and walls, and everything else surrounding the climate. Think:FloydEXP “Beyond The Wall” was orchestrated with the sophisticated anarchy that is refashioning the music and technical industry while evoking the threat of imagination. Pink Floyd defied music and at the same time defined it. It challenged its sensibility while at the same time created it.

Matched to the sound and theme of each song, (“Money”, “Welcome to the Machine”, “Comfortably Numb”, “Another Brick in the Wall II”, “Wish You Were Here”, and more), the virtual world bequeathed the environment, suspending belief and accepting the surroundings as real for the moment. Immediately upon entering the Dome’s Art Park, the Think:FloydEXP began, culminating with the band’s live, immersive concert.

Brainchild of the “Think:EXP” concept, Scott Page, saxophonist and rhythm guitarist for Pink Floyd, is an entrepreneur, technologist, musician, songwriter and visionary. Responsible for creating companies including, 7th Level Inc, New Media Broadcasting Company, Direct2Care, and GetYourOPI, he was named one of “The Top 100 Multimedia Producer’s, by Multimedia Magazine. He was also named by Buzz Magazine, one of the “100 Coolest People in Los Angeles”, and one of the “50 New Media Innovators” showcased in Pioneer Electronics’ Multimedia Frontier. As a “Business Rockstar” Page continues to blast the music world with utopian concepts designed to rescue the unforgiving environment of the music industry, providing the ammunition for musicians to follow their dreams.

Fans of every age, and diversity accumulated inside the 360º domed venue, sitting on chairs, deployed upon beds, and even laying on the cement floor on their backs looking upwards in anticipation. The Think: EXP delivered a tight, musical explosion beginning with “Speak to Me”, followed by “Breathe.” Artists created pictures on and off stage, Virtual Reality was everywhere crashing down upon the crowd, while the music of Floyd continued endlessly. The experience can only be compared to a Cirque du Soleil times two. The grand finale, “Run Like Hell” was an unprecedented climax of fantasy and music provoking the crowd to rise to their feet.

Think:FloydEXP, “Beyond The Wall” will be featured again at the LA Wisdome on May 17th and 18th and June 7th and 8th. Purchase your tickets now as the concert sells out every time and is always saturated with repeat fanatics. Future concerts will allow Think:HendrixEXP, Think:BowieEXP, and other surprises destined to change the history of the music world. Prepare for a life altering musical, immersive encounter.