It was going to one of the great European cultural quarters, a shopping to street full of art, cafes. bars and cool stuff to rival them all.

It was going to a paved over, raved over, slaved over and turned into something that would be the talk of the continent- a Beasley boulevard as our own poet laureate John Cooper Clarke would have sneered beautifully. Experts sat on panels, brochures were printed, slide shows are commissioned websites were created- the ‘Oxford Road Corridor’, the ‘Southern gateway’  was given all those kinds of modern corporate names that looked fab and shiny in published brochures that showed a street with pedestrians and buses and endless opportunities for 21st century fun. 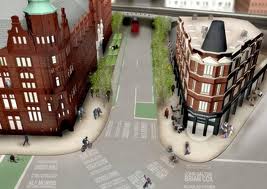 Of course it’s still packed in the winter- this is perhaps the biggest student high street in the UK but in the past few years things have started to change- what used to be a vibrant cultural quarter of music shops, theatres and venues has slowly become a strip of corporate coffee bars and rubble- the Cornerhouse is to close and move around the corner into a whole new development of an arts area that will move the people flow to No1 Street, Odder bar has been bought out by one of those soulless coffee chains and the BBC has been knocked down and moved out of the city to Salford- all that remains is a ratty looking car park.

The Oxford Road corridor actually looks more like a corridor than ever- an anonymous space hanging onto the city centre, what it doesn’t look like is the shiny new future that all those brochures promised despite still having landmarks like 8th Day and the run of bard around the Deaf Institute or the fab Gorilla bar.

Change is good- we like change but will miss the Cornerhouse when it moves- it was the focal point of the area- a heartbeat for decades slap bang in the middle of in Manchester and the best people watching point by the station- god knows what multi national chain will get hold of it now or what boutique hotel it may turn itself into.

Perhaps the No1 Street development will turn its gleaming concrete into an alternative future and realise the dream, maybe people will hang around there and create a new heartbeat and a new caffeine alleyway and Oxford Road will die or just turn itself into a conduit to rush along to get into town but the dream of Europe’s coolest street seems to have faded and died…