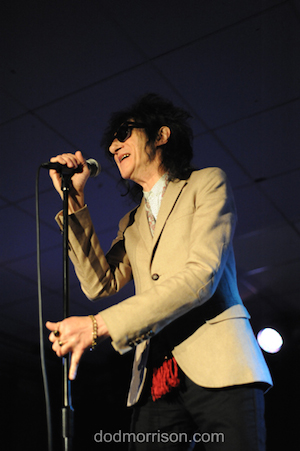 Stick thin word machine in switchblade pinstripe, the amphetamine Zimmerman in the Salford pouring rain, John Cooper Clarke is the genius poet whose guttural assault is both hilarious and poignantly brilliant.

For years we have had him as our own private court jester-a cult hero to the few but at last- and this makes your heart swell-the genius of John Cooper Clarke seems to be finally being appreciated with sell out shows and plenty of TV action for the bard of Salford.

Normally this kind of glowing love appears after the long ignored genius in question dies but for once the appreciation is coming in droves whilst the person is at the top of their game and let’s face it JCC is even better now than ever with his plastic bag full of barbed wire missives and his stand up brim full of killer quips and brilliant observations.

JCC appeared in the middle of punk and zig zagged his way across the scene like a Bob Dylan on speed. He always looked immaculate and sharp and sounded even sharper. He was funny, cutting edge, hip and cool and tuned a cynical generation onto the possibilities of poetry. Let’s faced it calling yourself a poet in the mid seventies school was like asking for a good kicking but Johnny Clarke made the form hip again.

Of course no-one could come close to his genius. He makes word spiel seem so simple but there’s a depth and intelligence to his missives that are far away from cheap gags and easy rhythms and rhyhmes. JCC’s stream of consciousness surrealism is up there with the greats and he was the hidden gem of the punk generation.

After his initial foray into the big time he seemed to wallow on the fringes, reappearing occasionally. You would see him supporting the Fall or Joe Strummer or at an ill attended solo show- a figure lost to the vagrancies of crummy culture where being the greatest machine gun hipster in a sharp suit mattered less than being flavour of the month or the latest celeb juice or hipster manipulator- in modern times tlaent is discarded by the hype machine. It took the Arctic Monkeys name dropping him to a new generation to re-establish John Cooper Clarke on the upward curve that he is now on.