Home Blogs Things we didn’t know a year ago : 2021 review 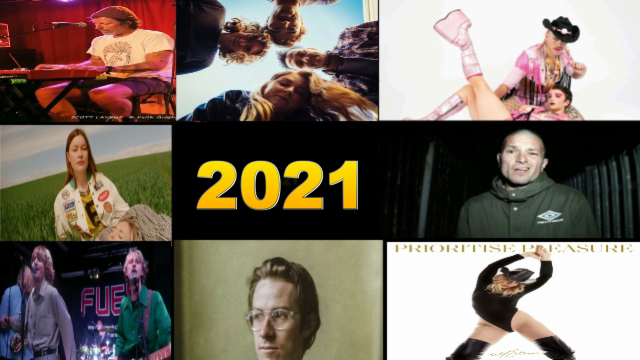 Keith Goldhanger rounds up the year with some of his highlights that have appeared during 2021.

As 2020 seemed to merge seamlessly into 2021 it’s easy to start ranting on about bands such as Yard Act, Lynks and Bob Vylan before being pulled up by the scruff of the neck by a passer-by screaming ‘2020 !!! these were new the year before last not this year !!!!’ ….and they’d be right. Once we left isolation in the summer one of us made sure these acts were on our list of performers we wanted to see and where else would be better than all in the same place in the same field over one glorious sunny (well….until the Sunday afternoon) weekend. Standon Calling became the only adventure in a tent this year for one of us which began with Yard Act and ended just as Jake Bugg began warbling on about a Lightning Bolt.

The really fresh new acts we so eagerly sought were to be found a couple of months later along a pedestrianised street in the Welsh Capital though. These are the bands the music blogs that used to be expensive magazines will be declaring the best new bands of 2024, the same ones currently declaring Dry Cleaning and Yard Act as their tips for 2022. DEADLETTER were the pick of the bunch during a non stop month of similar events and hopefully there’ll be a few gigs from them in 2022 to convince us their fabulous performance was more than a one off. The bands recent release (below) indicates this lot are worth making a note off.

2021 was less than six months long for those of us who enjoy tapping our feet whilst supping our ale but as the year ends and the threat of even more restrictions approaches we’ve still managed to add to the list loads of bands we expect everyone may like to visit one day whether it’s down the local back room of a pub or with the rest of the curious world at one on the summer festivals (or even somewhere in between).

According to an Email received recently (and ignoring the way in which this result was reached) the most played album in 2021 that came via my laptop was WILLIAM DOYLE‘s fabulous Great Spans of Muddy Time album followed closely by SELF ESTEEM‘s Prioritise Pleasure, an album loved by many and an act we expect to be seeing performed in one of those big fields with thousands of other next year. Still on the subject of albums MODERATE REBELS provided three albums and an EP this year all of which are ace and shout out’s for fabulous debut’s go to DRY CLEANING (first mentioned here in January 2019) and THE LATHUMS who one expects will soon take the world by storm and be responsible for a new generation of teens that may now decide that a guitar is what’s missing from their lives now that everyone has ran out of films to watch on Netflix.
2021 hasn’t been without the shouty angry stuff thank heavens. BENEFITS have made their mark and provided some magical audio moments during the year, PINK SUITS hollered their way through a debut album whilst DITZ, TV PRIEST, GRANDMAS HOUSE, SPRINTS, ENOLA GAY, THE LOUNGE SOCIETY and CHEAP TEETH have all fallen foul of the bloke next door who hates any neighbour playing music really loud at four O’clock in the morning.
Alongside that glorious Deadletter show top marks also went to HOT CHIP (Standon Calling) AK/DK (Are you listening? Festival) and SELF ESTEEM (Brighton- Patterns) before remembering TTRRUUCES, SFVEN, SPRINTS and MODERATE REBELS,  who all turned up at the most convenient times during the year and will be viewed again as soon as a second chance arises.
SFVEN (above) in particular was a great new find in 2021. He played in a packed tiny club on a wet Wednesday night and nonchalantly performed this in the middle of his set. There For You is quite possibly one of the most original breath-taking tunes of the year that I’ll post here seeing as though you probably all know about everything else that’s been mentioned so far especially if you’ve recently re-joined the army of people working from home with the radio on in the background for company.
2021 also managed to dish up a great selection of electronic music that when done well can keep many of us patronising night buses or dancing around the living room depending on the time of year these came into our lives.  JOCKSTRAP provided the delightful 50/50 all those GABE GURNSEY remixes we can’t keep up with, a bucket load of weird stuff that some people from Estonia kept sending over (above), 7T2 NAMES, BICEP, THE BUG and that fabulous FOALS remix by Gaspard Auge and Victor Le Masne that will sit nicely alongside any Tame Impala or MGMT remixes that have drifted towards the back of our record boxes recently.
SCOTT LAVENE turned up on a quiet midweek evening to perform much of his glorious Milk City Sweethearts album, ABBA returned, LAZARAS KANE finally went away and BAUHAUS returned for a one-night stand inside the massive Alexandra Palace.
2021 has been another decent year for new bands arriving as well as previous years favourites releasing superb albums such as JOHN, MUSH, IDLES, SHAME, SQUID and of course the prolific SLEAFORD MODS.

The year has continued to provide enough acts and tunes that all became different people’s favourites yet again. Did anyone see The Christmas Top of the Pops? That seems as far away from some of our lives nowadays as Songs of Praise. Thanks for reaching this far down the page and for everyone’s continued support in making Louder Than War the place to keep revisiting for more great music than we could ever have time to digest. Roll on 2022.